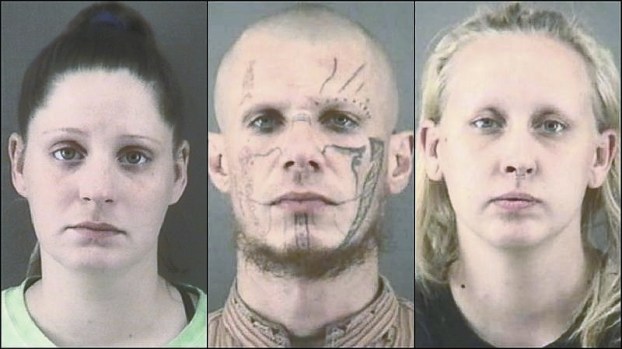 Amber Nicole Burch, the girlfriend of self-professed Satanist Pazuzu Algarad, was convicted Thursday in Forsyth County Superior Court of fatally shooting a man and helping Algarad bury another man nearly eight years ago in the backyard of a Clemmons house.

Burch, 27, pleaded guilty to second-degree murder, armed robbery and accessory to murder after the fact. A judge sentenced her to 30 years and eight months to 39 years and two months in prison.

The skeletal remains of Tommy Dean Welch and Joshua Fredrick Wetzler were found in October 2014 after Forsyth County sheriff’s deputies searched a home at 2749 Knob Hill Dive in Clemmons. Algarad and Burch lived there with Algarad’s mother, Cynthia James.

Burch was indicted on charges that she shot Welch to death in October 2009 and helped Algarad bury Wetzler in July 2009.

Algarad killed himself in state prison in October 2015 after admitting that he killed Wetzler. His mother was in the house when both men were killed, he said.

James said she heard gunshots on the day Wetzler was killed while she was getting ready for work. She said she saw her son holding a rifle and standing over Wetzler. Algarad later shot Wetzler again to make sure he was dead, she said.

Burch was not in the house at the time of the shooting but in Rock Hill, South Carolina, where she grew up. Algarad called her a few days later asking her to help bury Wetzler’s body.

In Welch’s murder, testimony indicated Burch picked him up from a gas station and took him to the house she shared with Algarad and James. They drank alcohol and later in the night, Burch told Algarad that she was going to kill Welch. Algarad told her where a .22-caliber rifle was, and she shot Welch in the back of the head while he sat next to Algarad on a couch, detectives said.

Welch’s body was found face-down in a former fire pit. Only scraps of clothing were left on the remains, and Welch had to be identified through dental records.

Wetzler’s body was found in a shallow grave near the exterior basement of the house. Wetzler had been shot three times in the head and at least four times in the torso area.

Court testimony said that Algarad regularly performed Satanic rituals that involved animal sacrifices at the house. Algarad told doctors at the now-closed Dorothea Dix Hospital that he was a follower of a Sumerian religion that requires regular sacrifices. He was concerned that he would not be released from the hospital in time to perform a ritual during the “black moon.”

The final defendant in the case is Krystal Nicole Matlock, 30, who is charged with accessory to murder after the fact, accused of helping Burch and Algarad bury Wetzler’s body. She is scheduled to appear in court April 3 in Forsyth County.

Daylight savings time begins on March 12 and many people will be spending more time in the evenings working outdoors in... read more