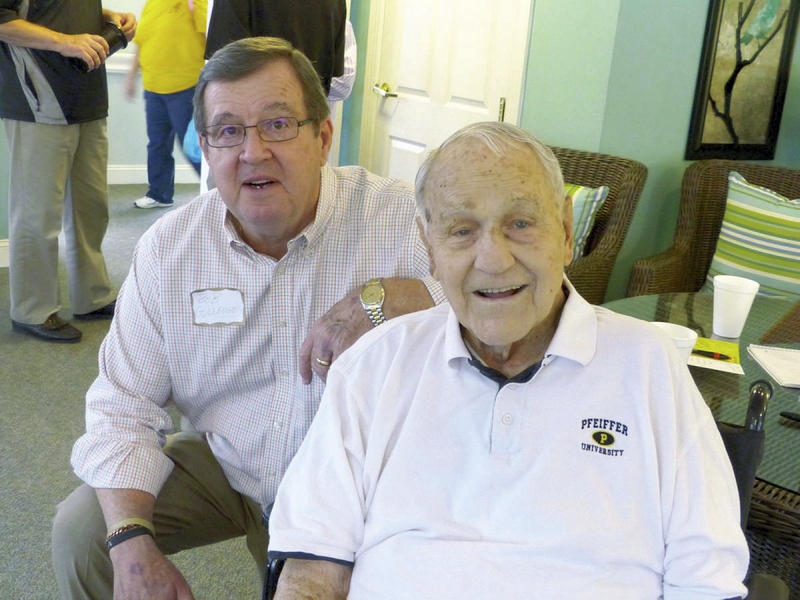 Photo courtesy of Sandy Hatley ... Joe Ferebee, right, former baseball coach at Pfeiffer University, recently celebrated his 98th birthday with some of his former players. At left is Bob Gulledge, an East Rowan (1964) and Pfeiffer (1968) graduate. Ferebee was also a long-time coach for the Rowan County's American Legion baseball team.

For the Stanly News & Press

Coach, smiling the entire time, brought a box of old bats to share with his former players. Ferebee was delighted that each wanted a bat.

Bob Gulledge of Camden, S.C., shared, “In the box was my bat. I played summer baseball in New Jersey in 1965, and Bill Schimchak was the centerfielder of the amateur team I played on. He had played in the minor leagues a few years earlier, and bought his own bats from Louisville Slugger. I took one to school in August and forgot about it. Blew me away when I found it. Amazing. Coach did not waste anything.”

“We were all pretty good ball players, but he made us better players,” added Vic Worry, who pitched for the New York Mets in the minor leagues after graduation. “I came from Pittsburgh. He was like my parent away from home.

“I got to see the Atlantic Ocean for the first time,” continued Worry. “We were playing in Wilmington and Coach took four cars to Wrightsville Beach.”

Randy Benson, the 1972 Sporting News Left-Handed College Pitcher of the Year from Pfeiffer’s class of 1976, played professional baseball for the Baltimore Orioles, the St. Louis Cardinals, Chicago Cubs and the Toronto Blue Jays. He also served as a scout for the Cardinals for 12 years.

“I was lucky. I got to play American Legion ball three years with the coach before I came to Pfeiffer,” Benson said.

Bob Baber, class of 1971 pitcher, made the trek from Lynchburg, Va., for his beloved coach’s party.

“He’s one of a kind,” said Baber. “He has a good memory. He doesn’t forget things. He remembered us getting kicked out of a game.”

The Hall of Famer still attends a few baseball games at Pfeiffer on the field that bears his name.

“But he wouldn’t put up with any shenanigans, he was military,” added former pitcher Jack Cooke, class of 1968.

Former player and event organizer Gulledge concluded: “As long as we have him, we will keep doing this.”

Sandy Hatley is a freelance contributor for The Stanly News & Press.