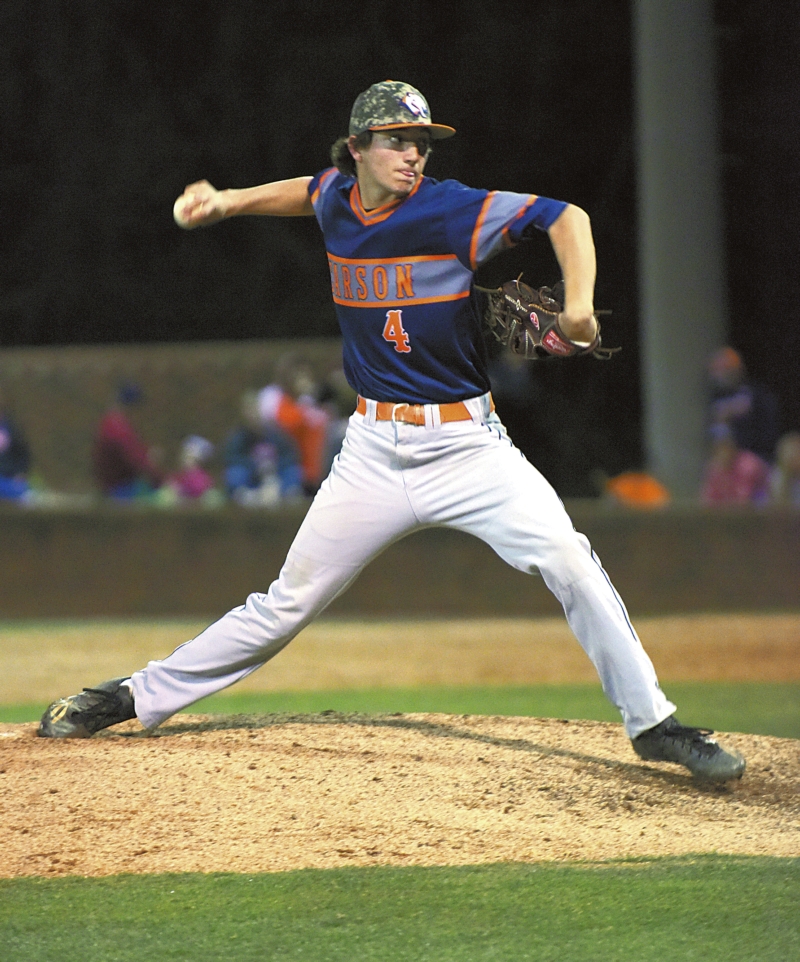 GRANITE QUARRY — No one needed more proof, but Owen White provided it anyway.

The Carson right-hander showed again that he has a super bright future in baseball after hurling a no-hitter in Tuesday night’s 2-0 South Piedmont Conference victory at East Rowan.

“I feel like I had command of everything and my catcher and I were on the same page,” said White, who threw only 88 pitches and faced the minimum 21 batters. “Really, I just did my job.”

He did it exceptionally well. White — a junior rated among the nation’s best — struck out eight and walked two, though both East base runners were erased before reaching second base.

Working efficiently with guile and confidence, White braided his signature, upper-crust fastball with a sharp curve, a knee-buckling change-up and a newly minted, take-a-seat slider, breezing to his first varsity no-hitter.

“After the game I had to congratulate him,” said Owen, who faced 27 batters in a splendid, complete-game effort. “That’s something I usually don’t do. But you can’t be too mad when a guy pitches like he did tonight.”

“Tonight was a big game because you don’t want to go in an 0-2 hole,” said winning coach Chris Cauble. “Runs have been hard to come by, so we were trying a little bit of everything, trying to manufacture a few tonight.”

The Cougars used two-out singles by Logan Ridenhour and White to score twice in the top of the third inning. It began when Solie Holshouser legged out a leadoff infield hit and was replaced at first base by Cameron Prugh, who bounced into a forceout. Prugh moved to second on a sac bunt by Cole Hales and scored when Ridenhour chopped a 1-2 curveball into center field.

“They did a good job putting the ball in play,” said East coach Brian Hightower. “It wasn’t like they were stroking it. They just found some holes.”

Ridenhour, who took second on a relay throw, scored Carson’s second run when White steered a ground-ball single to right. “I wasn’t sure how well we were going to hit the ball (against Owen),” White indicated. “But I knew we’d put it in play somewhere.”

So did East. White induced nine groundouts, including an inning-ending double play that erased Colby Myrick in the last of the sixth. The Mustangs’ only other baserunner was Hayden Setzer, who drew a leadoff walk in the second but was gunned down by Carson catcher Garrett Alewine on an attempted steal.

“We just came ready to play,” said Alewine. “(White) was in control. He hit his spots, kept his composure and did what he does best. He did his job.”

White was quick to credit Carson’s defense, which made every play it had to.

“Without them, this no-hitter would not have happened,” he said. “It’s not like I struck everybody out.”

He didn’t, but he finished his gem with an impressive pitch — an 0-1 slider that East slugger Chandler Blackwelder grounded to Hales at third base.

“I never thought about a no-hitter, not until that very last pitch,” White said during a post-game drizzle. “Didn’t want to jinx myself. That last pitch, I just wanted to throw it across the plate. That was my main goal — keep doing my job as a pitcher.”

And doing it nearly flawlessly. “He had a great game,” said Ridenhour, Carson’s senior second-baseman. “You couldn’t ask for anything better.”

NOTES: White retired 15 of East’s first 16 batters. Owen set down seven of Carson’s last eight. He had at least one strikeout in every inning except the fourth … Cougars’ DH Maddux Holshouser had the game’s only extra-base hit when he punched a two-out double down the left-field line in the top of the second.