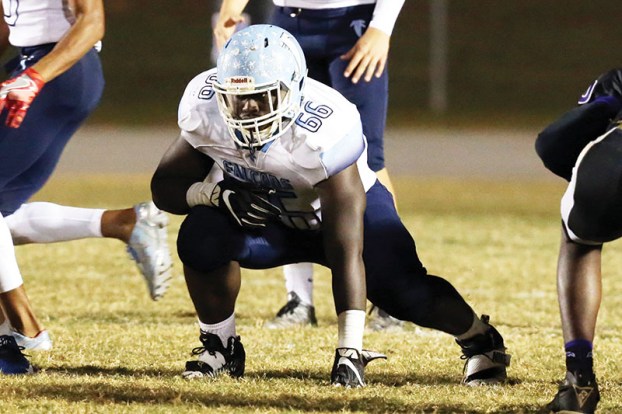 That’s appropriate. Lofton gave blood often on the field for the Falcons during his hard-nosed football career. Along with gallons of sweat and a few tears at the end.

“He was a real leader the last two years,” West head coach Joe Nixon said. “Great job on the field. Great job in the weightroom. Great job in the classroom. That’s why he’s getting a chance to keep playing football and to get an education.”

Lofton is headed to Averett University, which should be a good opportunity for him. He could play a lot of football for the Division III Cougars and he should get a degree.

While Averett sounds like an exotic locale, it’s in Danville, Va. It’s so close to the North Carolina border that’s it’s less than 100 miles from Salisbury. You can get from Salisbury to Danville in 90 minutes. That travel distance was one reason Lofton picked Averett over N.C. Wesleyan in Rocky Mount.

Averett competes against schools such as Methodist and Greensboro College in the USA South Athletic Conference. The Cougars went 5-5 last season.

“Recruiting was fun, but there was some stress,” Lofton said. “Averett felt right. I just loved it up there. The coaches were a lot like the coaches I had at West. I could tell they were interested in me not just as player but as a person. They really tried to understand who I was.”

Lofton isn’t a monster physically, but he’s a very strong teenager, the reigning county shot put champ. While he’s listed at 6-foot-2, 250, he’s probably added a few pounds since a 10-4 season ended with a third-round loss at Hibriten on Dec. 2.

When Nixon surveyed his offense prior to this season, he was concerned. Stellar offensive line has been the Falcons’ calling card over the years, but this time there was just one returning starter on the o-line. That was Lofton, the left guard.

“He played with high level of effort, with a high motor all the time,” Nixon said. “He really helped bring some inexperienced offensive linemen along and he helped our offense be pretty good. We had another 1,000-yard rusher (Jovon Quarles) and another 1,000-yard receiver (Kortez Weeks).”

Late in the season, as injuries piled up on the defensive line, it was no surprise to see Lofton digging in on the other side of the ball as well. West doesn’t like to play anyone both ways, but there wasn’t much choice, and Lofton was eager to help out. He showed enough that there’s a possibility he’ll be moved to defense in college.

Quite a few Rowan County athletes have been successful at Averett in recent seasons, including former West Rowan kicker Hobie Proctor.

“A great family and great coaches have gotten me to this point,” Lofton said. “I’m going to Averett with the idea of working hard and earning everything I get. Wherever they want to put me, that will be fine.”

DENVER (AP) — With Frank Kaminsky out, the Charlotte Hornets needed someone to step up at the end of a... read more