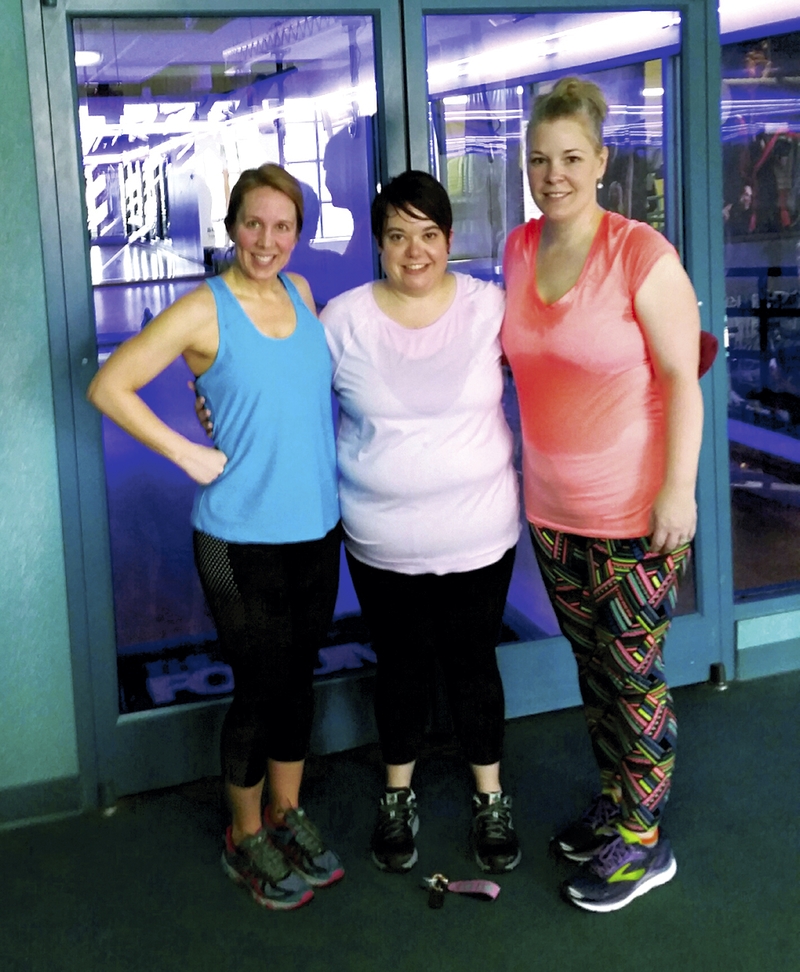 Plenty of smiles after their results

Usually February is a cold month and nearly all of my newer clients prefer to do their workouts inside. The nice weather for February got us outside more than I expected and it paid off. Almost always, we try to build cardiovascular fitness and endurance within the first three months of beginning a new wellness program. We got ahead of the game in February. Here is what happened.

Brooke Taylor, Circulation Manager for the Rowan County Public Library, had a good January and continued the same pace in February. Brooke ramped up her running and discovered spin classes at both the Hurley YMCA and the Forum. Her first spin class came with Michelle Patterson, just off of her own successful year of wellness training during 2016. Michelle has inspired Brooke to keep going, just as she has done. Brooke and Vivian Koontz, Events Coordinator for Salisbury Parks and Recreation, had planned their first ever spin class for the next day at the Forum when Brooke jumped the gun.

After a less successful month of training than she had hoped in January, Vivian shook off some sickness and also started running and mixed that with spin classes and circuit workouts. Vivian, a former high school and college athlete, made up ground fast.

Since we have placed a big emphasis on calories in, both women have changed their eating habits. Brooke said, “I am eating smaller portions, more fresh fruit, lower sodium and a lot less sugar as some of the significant changes. I am more conscious of reading labels and looking not only at calories but calories from fat.” Vivian added, “And I no longer eat when I am full. It is OK to leave something on my plate.”

Favorite exercises so far for Brooke have focused on running. She said, “I really like it, especially after the first 1 ½ miles. I saw this quote that running can make a person capable of so much more than they imagined and feel like it is true.” Brooke is already checking racing calendars after completing the Will for Food 5K in February. Vivian loves the spin classes with Rayna Gardner, general manager at the Forum. Rayna’s spin class includes plenty of upper body conditioning.

With a solid foundation of regular exercise established, Brooke and Vivian both want to branch out and do more classes. On the near horizon are some of Ester Marsh’s classes at the Hurley Y. She teaches several strength and agility classes in the early morning that will fit timewise. It is clear that they enjoy doing the classes together which helps keep them going as they get stronger.

Both are starting to field compliments on their early success. Family and co-workers have added support. Brooke said, “I get a lot of compliments from patrons at the library who are following the articles in the paper.” At least one of Vivian’s peers with the City of Salisbury said, “The old Viv is coming back!” Vivian credits her husband, “He has been encouraging my workouts and does a great job keeping the kids so that I have time to go running. Sometimes, we make it a family affair.”

Always fun for me is to hear what my clients have to say during exercise. Brooke said, “I can’t wait to get where I can run four miles without feeling like I am going to blow out a lung.” Vivian told about seeing a snake on the Spencer Woods trails which prompted, “The fastest running I have done in years.”

Goals are similar and simple for both. Brooke and Vivian want to lose at least five more pounds in March while building more endurance and trying more new classes. Vivian said, “I’m open to anything. I love those with lots of energy.” They will focus on building overall strength.

We will head into March with solid results through the end of February. Brooke is down more than 15 pounds and Vivian is just shy of 10. Clearly, their cardiovascular fitness has improved greatly. With two months in the books, it is easy to be excited about where they are going by year’s end. Brooke and Vivian enjoy each other and communicate often. I look forward to seeing them each Tuesday and Friday morning and watching their progress while finding out more about them. Just this month, I learned that they are both accomplished singers. Who knew?

See you at the end of March!