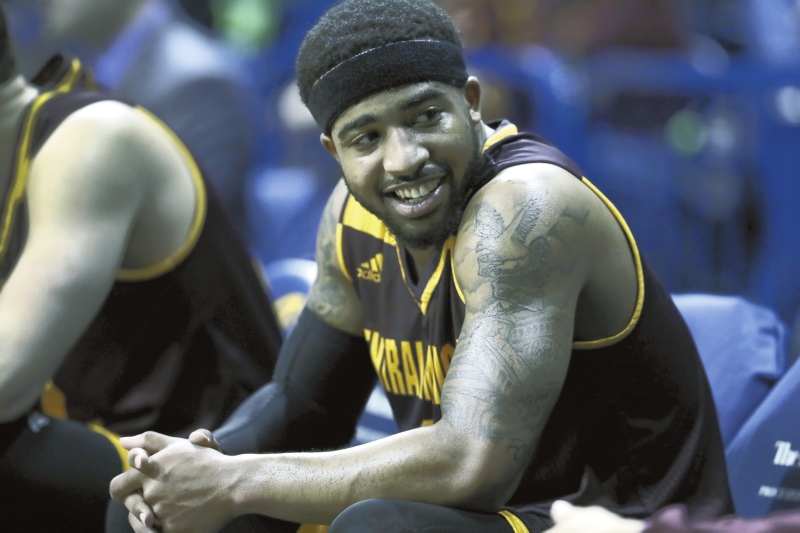 In this Friday, Feb. 24, 2017 photo, Central Michigan guard Marcus Keene talks to a teammate on the bench during an NCAA college basketball game against Toledo in Toledo, Ohio. Keene, Central Michigan's scoring machine, has a chance to have college basketball’s highest scoring average since Charlie Jones put up 30-plus points a game 20 years ago at Long Island University. (AP Photo/Carlos Osorio)

TOLEDO, Ohio (AP) — Marcus Keene attracts a crowd on the court and in the stands.

Central Michigan’s scoring machine, one of college basketball’s most prolific scorers in 20 years, slashes to the basket at will, leaving one defender and drawing one or two who usually make contact. He also overcomes attention on the perimeter, where his array of moves and ability to go either way off the dribble set him up to hoist shots from NBA 3-point range .

The league is taking notice.

Despite being listed as a 5-foot-9 point guard, scouts have been showing up to watch Keene play, especially on the road to avoid a trek to Mount Pleasant, Michigan, in the middle of the state. The Youngstown State transfer, who was born in Germany and raised by his parents in San Antonio, is averaging 29.4 points going into Central Michigan’s final regular season game Friday night at Western Michigan. Keene is averaging five-plus more points per game than the nation’s second-leading scorer, South Dakota State’s Mike Daum, who is a foot taller.

Since Charles Jones averaged 30-plus points a game at Long Island University during the 1996-97 season, Keene has come closest to matching the feat. A 50-point game , the first in Division I hoops since 2013, along with becoming the first with six 40-point games in more than a decade boosted his average enough to put him in select company. Keene, Stephen Curry and Jimmer Fredette are the only players who have averaged at least 28.5 points per game over the last 15 seasons in Division I basketball.

Isaiah Thomas, who like Keene may be shorter than 5-9 in socks, has proven with the Boston Celtics that the shortest player on the court can still be one of the best.

Looking for possibly the next diminutive great, three NBA teams dispatched representatives to evaluate Keene last week at Toledo. Twenty seconds after the tip, he picked up a foul. He went to the bench with 8:13 left in the first half with three fouls, five turnovers and no points in 9 minutes.

It may not have been a big deal for 4,463 fans, but a few scouts let out a collective sigh because the person they came to see was stuck on the bench.

“You’ve got to be kidding me,” one scout said, shaking his head.

Next to him, another scout had a suggestion.

“It should be like summer league,” he said, referring to the NBA’s rule that allow for 10 fouls.

Even in a foul-plagued game, Keene showed a knack for scoring in bunches and finished with 27 points in a lopsided loss.

Keene has been in the spotlight during his spectacular season, becoming a story transcendent enough that even “CBS Evening News,” visited him on campus. Keene, though, hasn’t been able to rejoice in it because Central Michigan (16-14, 6-11 Mid-American Conference) has allowed a potentially promising season slip away with six straight losses going into Friday’s matchup with the rival Broncos (14-15, 10-7) on the road.

“I don’t like it at all,” he said. “Of course, the attention is helping me for later on after college basketball. But I want to win games and this is frustrating that we can’t find a way to win.”

The Chippewas will open the MAC Tournament on an opponents’ home court Monday, hoping to advance to the quarterfinals in Cleveland to keep Keene’s dream alive of playing in the NCAA Tournament.

“If we play our game, we can beat everybody ,” he told The Associated Press. “I still feel confident in myself and in my team that we can win.”

Confidence, or the lack of it, has never been a problem for Keene. That was true even when Youngstown State was the only Division I program that really wanted him out of Warren High School in San Antonio , where he was teammates with Atlanta Hawks rookie Taurean Prince.

“Everyone thinks you have to be 6-3 to be a guard in college,” his father, Ivan Keene, said. “He just got overlooked because of his size, but I remember telling him, ‘It only takes one school to take you, because you can’t play for them all.’ I prayed to God that one school would take a chance on him and one did and we’ll always be thankful for that.”

After averaging 6.5 points as a college freshman, his mother recalled him coming home in the summer with index cards full of tips from his coaches. Instead of going out with his friends at night, he got his rest for busy days that started early.

“We put an alarm system in our bedroom because we had four teenagers in high school at the same time so we could know when someone was going in or out of the door and it would go off at 5:45 a.m. when Marcus would go out and run,” Alberttina Keene-Jones said. “Then he would come back, eat, and go out some more. Then he would take a nap before leaving again to work on his game some more.”

Keene’s hard work paid off as a sophomore when he averaged a team-high 15.6 points a game and scored a then-career high 24 points on Nov. 18, 2014, in a loss to the free-wheeling Chippewas. When Central Michigan coach Keno Davis saw on social media after the season that Keene wanted to transfer and confirmed with Youngstown State’s compliance department, assistant coach Jeff Smith called Keene and was thrilled to find out he was interested in reuniting with a fellow 5-9 Texan, Braylon Rayson. Keene sat out last season as a redshirt, starring for the scout team.

Davis acknowledged he may coach the once-in-a-generation scorer for only one season.

“He’s going to have opportunities to play at another level,” Davis said. “Your job as a coach is to make sure a student-athlete in his position has all the information he can have to make the best decision. If the thought is to come back, great. If the decision is to leave and play professionally, you support that decision as well.”

Keene insisted he doesn’t know yet if he will stay in college or enter the NBA draft this year.

“There’s a chance I’ll go because what I’m doing probably won’t be done again,” he said in an AP interview. “I just have to see what people say after the season and see how it plays out.”