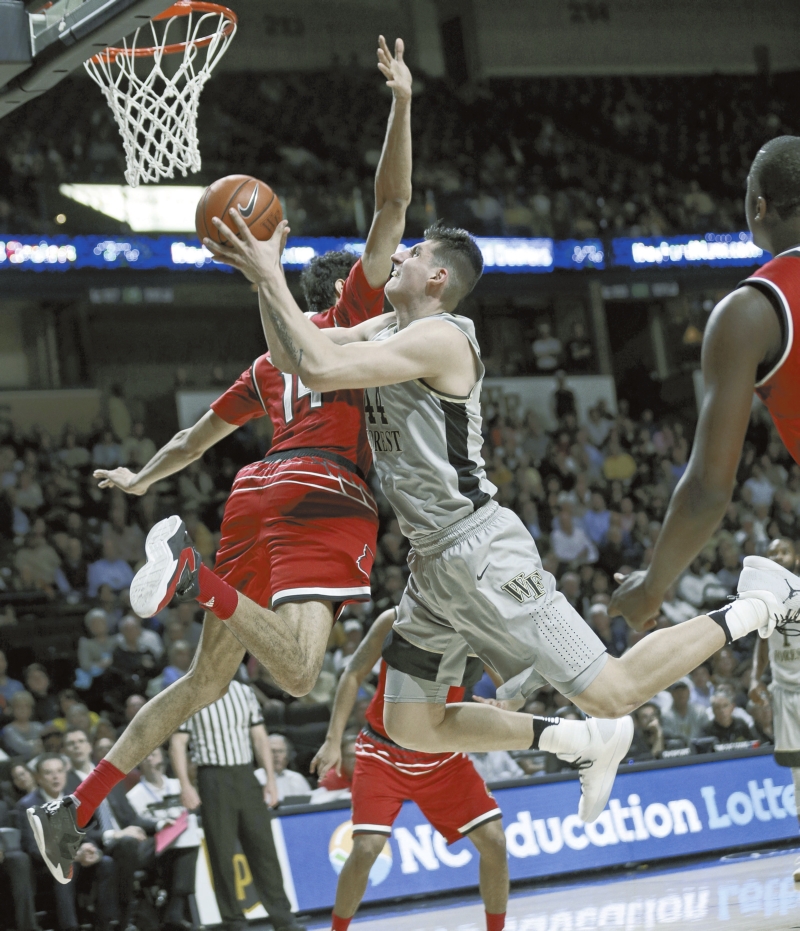 Wake Forest's Konstantinos Mitoglou, right, is fouled as he drives against Louisville's Anas Mahmoud (14) during the first half of an NCAA college basketball game in Winston-Salem, N.C., Wednesday, March 1, 2017. (AP Photo/Chuck Burton)

WINSTON-SALEM (AP) — John Collins had 25 points and 11 rebounds to help Wake Forest rally from 14 down to upset No. 8 Louisville 88-81 on Wednesday night.

They got it, with Dinos Mitoglou and Mitchell Wilbekin hitting back-to-back huge 3-pointers in the final 3 minutes to turn a 75-72 lead into a nine-point margin.

Wake Forest is trying to reach the NCAA Tournament for the first time since 2010.

Deng Adel scored 22 points for the Cardinals (23-7, 11-6), who got off to a fast start but shot just 39 percent after halftime. They also struggled to slow the Demon Deacons once their offense got rolling, with Wake Forest shooting 46 percent and making 10 of 24 3-pointers.

This one ended with Wake Forest fans storming the court to celebrate.

Collins, a sophomore who has made himself a candidate for ACC player of the year, finished 7 of 12 from the field and 11 of 12 from the foul line to earn his 12th straight 20-point performance.

Wake Forest trailed 41-30 late in the first half but used a 20-4 run spanning halftime to take its first lead — and eventually pushed it to 11. Louisville got as close as three before Mitoglou and Wilbekin’s huge 3s.

Louisville: The Cardinals made 12 of their first 20 shots, but 17 of 41 (41 percent) the rest of the game and couldn’t keep pace with Wake Forest’s confident attack.

Wake Forest: The Demon Deacons entered this game at 1-9 against RPI top-50 teams after failing to close out several close game, and also with the same number of league wins they had managed the past two seasons combined. Closing this one out is a huge boost for third-year coach Danny Manning’s program.

Beachem responded by knocking down two 3-pointers during a 15-0 run while Boston College went over 6 minutes without a field goal, and the Irish led the rest of the way.

“Knowing it was senior night, (we were) thinking we couldn’t go out of here with a loss,” Beachem said. “Just to get a win with my brothers for the last time on this court was great.”

Bonzie Colson added 18 points and 11 rebounds for the Irish (23-7, 12-5 Atlantic Coast Conference), who have all but locked up a top-four finish in the ACC and a double-bye for next week’s conference tournament.

GREENVILLE, N.C. (AP) — Every college basketball player dreams of having a career game on his Senior Night, and East Carolina’s Caleb White certainly didn’t disappoint in his finale at Minges Coliseum.

The 6-foot-7 forward poured in a career-high 28 points in his final home game, leading East Carolina to a 66-62 upset of Connecticut on Wednesday night.

Kentan Facey had 12 points and 11 rebounds to lead four Huskies in double figures.

ECU (14-16, 6-11 American Athletic Conference) snapped a six-game losing streak in the series and beat the Huskies (14-15, 9-8) for the first time in two meetings in Greenville.

Michael Perry directed the Pirates bench for the 11th straight game in place of head coach Jeff Lebo, who has been out since hip replacement surgery on Jan. 16.

“The guys can see how close we are to being with the teams at the top of the league, and that’s where we want to be,” said Perry, who is in his 10th season with the program and previously spent four seasons as head coach at Georgia State. “This is another step toward being a championship contender in this league. UConn may not be as good record-wise as they’ve been, but they’re going to be back. That’s one of the best programs in the country.”

Before the game, Lebo announced in a press release the indefinite suspension of junior forward Jabari Craig for violations of team rules. Craig was averaging 1.0 points and 2.0 rebounds per game.

UConn: The Huskies are going to need an upset over visiting Cincinnati to improve their seed in next week’s AAC Tournament in Hartford. A win over the Pirates would have given them the inside track for the No. 5 seed and a first-round bye.

ECU: The Pirates improved to 5-6 without Lebo on the bench as they look for a positive conclusion to the season. ECU had already clinched a better finish both overall and in conference play than they had last season.

White hit 7 of 13 3-point attempts and was 5 for 5 from the free-throw line with four rebounds, two assists and no turnovers. Barkley had a trio of 3-pointers and eight rebounds and scored in double figures for his 11th straight game. Facey was just 2 for 7 from the floor, but 8 for 14 from the line with seven defensive and four offensive rebounds.

“I just wanted to make something happen tonight,” Barkley said. “It didn’t have to be scoring as long as I was involved and got my teammates involved.”

White now has 1,545 career points and is in fourth place on the Pirates’ all-time list, 108 behind Sonny Russell (1953). Facey had double-doubles in both games against East Carolina this season, scoring 13 with 10 rebounds in their game in Connecticut.

“I prayed a lot, and just tried to treat this as much as I could like another game,” White said. “I just kept shooting. Pretty much all of my shots felt good, but it started to slow down a little later. I thought I was going to cry when I walked off the court. I didn’t yet, but it’s going to hit me at some point.”

Pirates Michel Nzege, Andre Washington and White were honored in the pregame ceremony, in which Lebo did participate.

UConn: Hosts Cincinnati in Storrs on Sunday in the regular-season finale.

ECU: Visits Houston on Sunday in the regular-season finale.