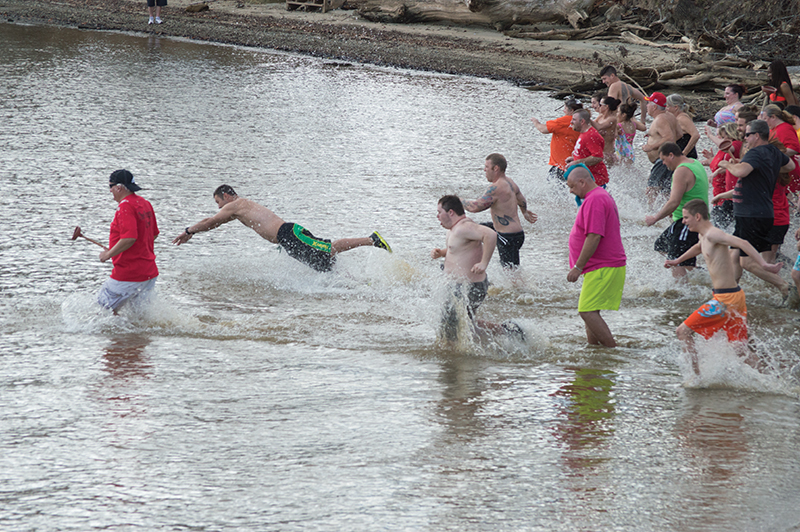 SALISBURY — With temperatures in the 70s, the Rowan County Special Olympics’ largest fundraiser was more like a solar plunge, joked some participants.

The Rowan County Special Olympics on Saturday held its fourth annual polar plunge event at the Salisbury Elks River Park on Long Ferry Road. A crowd of people sloshed around in High Rock Lake on Saturday as part of the event, which raised thousands of dollars to help pay for local Special Olympics activities.

“It has just been a great event,” Taylor said.

“The Special Olympics doesn’t focus on your inability. It focuses on your ability,” he said. “They can play whatever sport they want to play at no cost to them. They can just come out and be themselves.”

The name of the event may be polar plunge, but the water temperature on Saturday was a cool 56 degrees, Taylor said. The prior year it was 44 degrees.

Event participant Justin Lloyd and some friends half-jokingly suggested a better name for the 2017 event was “solar plunge.”

“It was still cold, but it felt a lot better getting out of the water this year,” Lloyd said. “Last year, you were cold getting in the water, and it was cold coming out too.”

Lloyd said he participated in the event two consecutive years because it benefits a good cause — the Special Olympics.

Lloyd was joined in the dash into and out of High Rock Lake by P.J. O’Neil, who said 2017 was his first time participating in the polar plunge. O’Neil said he plans to participate again next year.

As part of Saturday’s plunge, the crowd of participants lined up along a beach at the Salisbury Elks River Park. All at once, they darted into the water, touched the hand of a lifeguard floating several dozen yards away and darted back to the shore.

For more information about the Rowan County Special Olympics, contact Byrd by emailing jbyrd@rowanymca.org or calling (704) 636-0111.