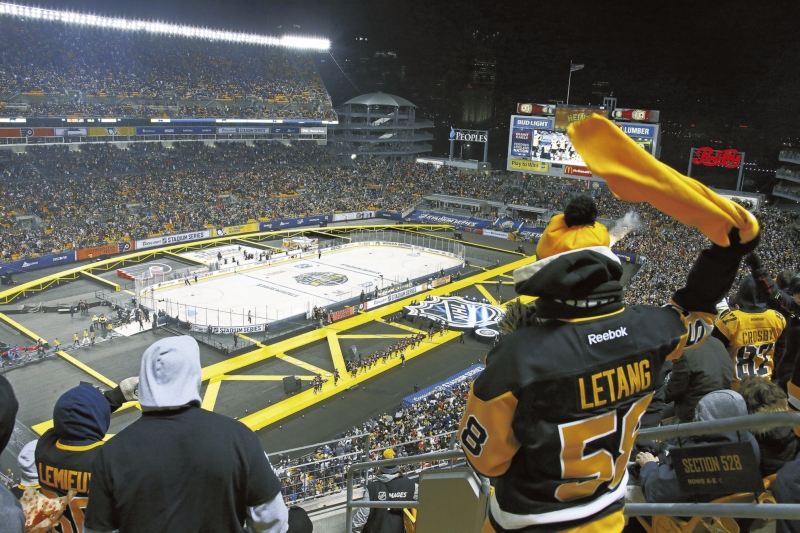 Matt Cullen, Nick Bonino and Chad Ruhwedel also scored for Pittsburgh, which thrilled the capacity crowd at the home of the NFL’s Steelers by capitalizing on some shaky goaltending by Michal Neuvirth. Jake Guentzel picked up two assists, and the Penguins drew within five points of Metropolitan Division-leading Washington.

Jakub Voracek and Shayne Gostisbehere scored for Philadelphia, but Neuvirth stopped just 25 of 29 shots as the Flyers dropped to 0-3 in outdoor games. Even worse, Philadelphia failed to pick up any ground as it tries to stay within shouting distance of one of the two wild-card spots in the Eastern Conference.

Despite a downright tropical week that saw temperatures soar into the mid-70s by Friday afternoon — more suitable for some pickup street hockey than a sheet of ice in the middle of an NFL stadium — Mother Nature dished out a pretty timely assist to league organizers hours before the puck dropped. A cold front fueled arrived late Saturday afternoon, and by the time Crosby and Claude Giroux stood across from one another for the opening faceoff, it was a seasonable 36 degrees with a hint of snow.

The lone complication didn’t come from warmth but the wind. Gusts at ice level became so disruptive the NHL decided to have the teams switch sides midway through the third period in an effort to even out the amount of time the teams shot in each direction, something that’s never a factor indoors.

While appreciative of the chance to play on such a unique stage – particularly one framed by a replica of one of the famous “Three Sister” bridges that span the adjacent Allegheny River – the teams stressed the need to focus on the stakes and not the festival-like atmosphere.

Still, it also gave Crosby a chance to revisit — and maybe finally put to bed — the most difficult moment of his career. The two-time MVP was at the peak of his powers and the league’s leading scorer heading into the 2011 Winter Classic when a hit to the head by Washington’s Dave Steckel changed the arc of Crosby’s career. He spent the better part of two calendar years recovering, though he hardly wanted to talk about it in his return to Heinz Field, saying he simply hoped for a better ending this time around.

It was, thanks in no small part to Crosby’s brilliance. Pittsburgh’s captain helped the Penguins shake off a slow start by working himself free at the right circle and taking a slick feed from Guentzel and firing it into the open net 11:18 into the first to give Pittsburgh the lead. Bonino doubled the advantage 6:44 into the second when he drilled a slap shot by Neuvirth on the power play.

The Flyers drew within one just past the midway point when Voracek muscled his way from the corner to the front net and slipped it by Murray.

NOTES: Pittsburgh went 1 for 5 on the power play. The Flyers were 1 for 4. … Pittsburgh D Ron Hainsey, acquired in a trade with Carolina on Thursday, played 21:08 minutes in his debut. … Penguins D Kris Letang did not play due to an upper-body injury. …  Steelers All-Pro wide receiver Antonio Brown served as the pregame emcee, introducing the Penguins to the capacity crowd. … The Penguins also played a video montage of team highlights set to the song “Renegade” by Styx, a staple at Steeler games. … Attendance was 67,318.

Flyers: Host Colorado on Tuesday. Philadelphia beat the Avalanche 4-3 in the first meeting on Dec. 14.

Penguins: Begin a road-heavy portion of their schedule in Dallas on Tuesday. Pittsburgh plays seven of its next nine away from PPG Paints Arena.