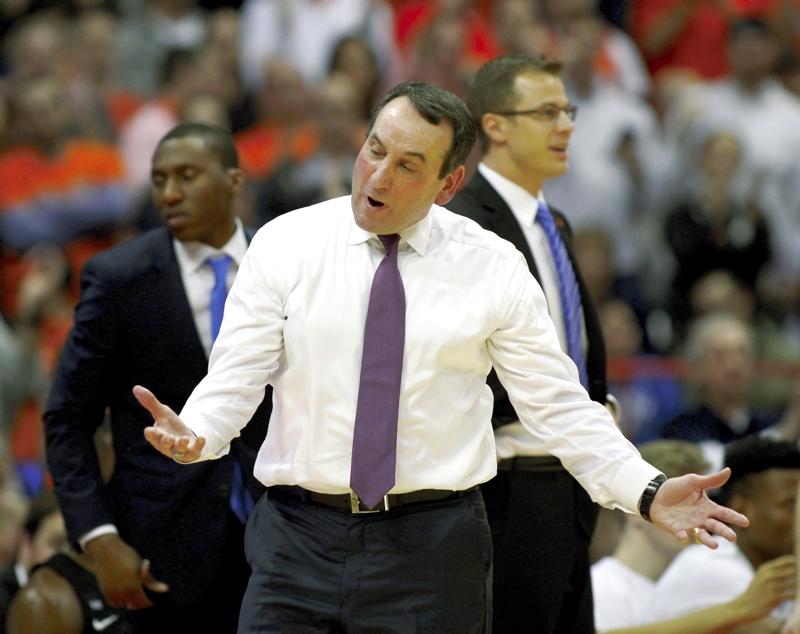 GAME OF THE WEEKEND: No. 10 Duke at Miami. The Blue Devils (22-6, 10-5) had won eight straight games before Wednesday’s loss at Syracuse. The Hurricanes (19-8, 9-6) are coming off a win at Virginia to bolster their NCAA Tournament hopes, while both teams are battling to secure at least one of the top four seeds for the ACC Tournament and the double-round bye that comes with it. “During this time you’re going to face teams that just inherently should be hungrier than you,” Duke coach Mike Krzyzewski said of playing late-season games against bubble teams, “and then you have to try to be as hungry. And that’s a challenge.”

LOOKING AHEAD: There are three key games to start the final week of the regular season. First is No. 8 North Carolina’s Monday visit to No. 18 Virginia for the teams’ second meeting in 10 days. That same night, Miami visits Virginia Tech in a matchup of teams chasing NCAA bids. Then, No. 19 Florida State visits Duke on Tuesday.

PLAYER TO WATCH: North Carolina’s Justin Jackson has improved his outside shot, and that’s made him a candidate for league player of the year. The 6-foot-8 junior is averaging 18.7 points entering Saturday’s game at Pittsburgh. Jackson had shot just 30 percent from 3-point range through his first two seasons, but he’s developed into a top-tier perimeter scorer for the Tar Heels while shooting nearly 40 percent on 3s this year.

INSIDE THE NUMBERS: No. 18 Virginia’s offense is struggling badly. The Cavaliers managed 144 points in losses to Duke, North Carolina and Miami for the program’s lowest three-game total in a season since December 1951, according to ESPN Stats & Info. Virginia shot 32 percent in those games and made just 10 of 52 3-pointers (19 percent), a big reason why the Cavaliers have their first four-game skid since coach Tony Bennett’s first season in 2009-10 entering Saturday’s game at North Carolina State.

ON THE WOMEN’S SIDE: The final weekend of the regular season is here, and No. 5 Notre Dame can wrap up yet another title. The Fighting Irish (26-3, 14-1), who beat Boston College on Thursday, host No. 8 Florida State in a game that will determine the top seed in the ACC Tournament. The Seminoles (25-4, 13-2) are coming off Thursday’s home win against Pittsburgh. Notre Dame is trying to become the second team to win four straight ACC regular-season and tournament titles, joining Duke (2001-04).