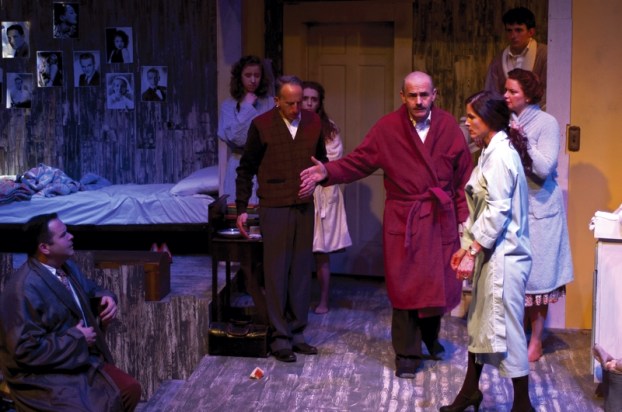 Your heart will break again for Anne Frank

Ava Holtzman brings the bright, brash Anne Frank to life in the St. Thomas Players’ production of “The Diary of Anne Frank” at Lee Street theatre.

She becomes Anne, too talkative, too bold, always questioning. She is the light in the darkness of this sad piece of history that illustrates how deadly prejudice is.

The story should be familiar to most, as the book was required reading for many of us. Anne and her family are Jewish, living in Holland, and they go into hiding to avoid the Nazi horrors — though they don’t know the full extent of those horrors for a while.

The Franks — father Otto, mother Edith and sister Margot — must share their tiny hiding space with another family, the van Daans, and their son, Peter. Later, yet another Jewish man, a dentist, Mr. Dussel, squeezes into their space with no windows.

They are completely dependent on Miep Gies and Mr. Kraler for food, news or needs. They do not leave the tiny apartment for years as World War II rages on. They cower under the bombing of the city. They dare not wear shoes or speak while people are in the factory below them. They constantly fear betrayal.

Under these fraught conditions, these teenage girls, smart and pretty, must make a life without friends, without school, without seeing the sun. Teen Peter is at that uncomfortable stage and spends most of his time with his cat.

The adults get along, but they bicker, each one trying to protect his or her interests, interests that are so basic: food, time in the bathroom, clean clothes.

Ava Holtzman’s energy carries the show and keeps it from being utterly depressing. And the cast around her is convincing and sincere. Alice Rich as the demanding Petronella van Daan uses the right note of discord, the woman who feels she deserves better. Chris Eller plays her husband, Hermann, who tires of constant hunger and longs for a cigarette. He is something of a conciliator, a man who was not meant to be in this particular prison.

Bill Reilly is quietly strong as Otto Frank, trying to take care of his family, especially his beloved Anne. Amber Watson is the stern, mostly steady Edith Frank, the mother Anne says she does not love.

When Mr. Dussel arrives, played by Seth Labovitz, it’s almost too much to add person No. 8 to their hiding place. Labovitz plays the dentist with the right blend of fussiness, nervousness and pride.

Sara Lee is the family’s protector and supplier, Miep Gies. She loves them and does everything she can to help them. Lee comes in bright and cheerful, always trying to keep the group’s spirits up.

Otto Frank’s business partner, Mr. Kraler, played by Dylan Ellerbee, wants to help his friends and fears for them greatly.

Later in the play, Ellerbee is the Dutch officer who raids the hiding place and takes the families away. Dalton Gray Miller has the unenviable task of being the Nazi, and the omnipresent Mike Cline is the Dutch Collaborator, as well as props man.

The play cannot encompass the diary, but it does drive home the essential points. Anne was hopeful — afraid at times, but mostly hopeful. Her father, the sole survivor, is a haunted man who lost all the people he loved in horrible ways.

In fact, the final scene features Otto Frank telling what happened to each member of the group who lived in hiding for so long — the ultimate tragedy is that they were taken to the camps just before liberation, in fact, if Anne had lived just a few more days, she might have been freed.

The fates of the others, as Otto describes, are terrifying, gut-wrenching, and since we’ve come to know these people, at least on stage, all the more personal and dreadful.

This is a story that must be told again and again, to remind us of the deadly results of dictatorships, the inhuman cruelty of discrimination, the consequences when people are ruled by fear. We must never let this happen again.

Director Claudia Gallup and St. Thomas Players, part of the Center for Faith & the Arts, should be commended for producing this stunning work. Scenic designers Larissa Garcia and Chris Speer created a set that intimates the cramped quarters and the confining walls of their lives.

The play lasts two hours, including a 15-minute intermission. It is suitable for  teens, but too complex and frightening for most children. Be prepared for the sound of bombs that terrified the people in hiding.