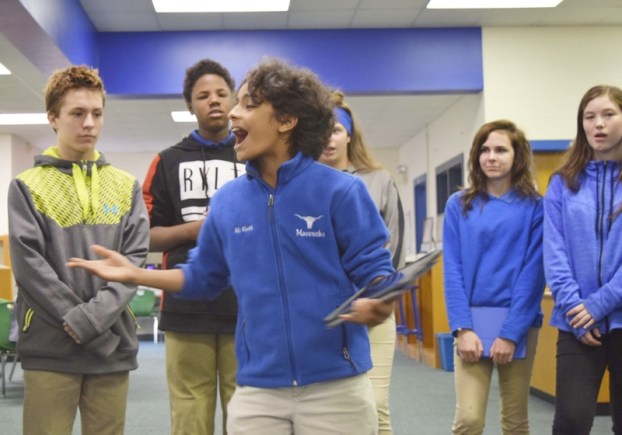 Seventh-grader Ali Khatib performs a pardoy of "My Shot" from the Broadway musical "Hamilton." Khatib and his classmates tweaked the song to pertain to literacy, instead of the Revolutionary War, as part of a play they wrote. Khatib plays the part of Lin Manuel Miranda, the creator of "Hamilton." Rebecca Rider/Salisbury Post

Angie Fleming’s seventh-grade AIG class is familiar with challenges. So when Assistant Superintendent Dr. Julie Morrow issued one to the North Rowan Middle School students, they rose to the occasion. Their task? To put together a presentation about the importance of literacy for the district’s upcoming Literacy Summit.

But the students wanted to go further.

“We wanted to create something bigger than that,” student Ali Khatib said.

Instead of a presentation with simple slides, the students decided to write a short play featuring prominent historical figures. The entire project was student-run. They came up with the idea, Fleming said, “and they just built and grew with it.”

After some discussion, the entire class opened a Google Document and set to work. They wrote the 20-minute play in a week.

“They all had a voice in this… I loved that part of it,” Fleming said of the play.

The play zeros in on famous figures, past and present, who come to life in a wax museum and talk about how literacy and learning helped them impact the world. Characters include Susan B. Anthony, the Wright brothers, Thomas Edison, Lin Manuel Miranda, Malala Yousafzai and J.K. Rowling — all chosen by students.

“You, our community, are not merely figures in a wax museum,” one student says during the skit. “We need you to be involved.”

The play also features a parody of “My Shot,” from the Broadway hit “Hamilton.” The class rewrote the lyrics themselves to make the song pertain to literacy.

Behind the scenes, the students are bursting with pride and excitement. To them, the play is more than a simple presentation — it’s a way for them to inspire others. Students said people often say children their age can’t do much to have an impact on the world, but the class is setting out to prove those people wrong.

“We are the next generation,” student Jennifer Lore said, “What we’re doing now will impact our kids, and our kids’ kids.”

And along the way, they’ve managed to inspire each other. Student Sebastian Reed said that the experience has helped them grow closer as a class. They all come from varied backgrounds, but they’ve become family.

“Now we’re all here together and we’re all building each other up,” Reed said.

Each student was assigned a role that played to their strengths, and no one was asked to do something they were uncomfortable with — a structure the students spearheaded

“So everybody has a role in it,” Fleming said.

It was an easy way, Reed said, of making sure everyone was doing his or her best work.

And they’re proud of their work, how they collaborated and managed to turn the play around in such a short time. Reed said he’s proud of the parody of “My Shot.”

“We turned ‘My Shot,’ a rap about the Revolutionary War, into something about literacy,” he said.

The rap, performed by several members of the class, has a few other highlights. Students had the idea for the girls of the class to say the line, “Don’t be surprised when your history books mention me” — a feature they’re especially proud of, and said they felt was important.

And they’re determined not to stop there. The class has a lot of suggestions for improving literacy, including community involvement and adults coming into schools to read to children. But they also want to have a louder voice, for people their age to have more opportunities to address the community directly or share things they’re passionate about.

Lore said the group is young, but they do have the ability to inspire others.

“We can inspire other people our age to do something we’re doing,” she said.

For Fleming’s class, the play is one way of doing that. Art is “really powerful” and “literacy spreads like wildfire,” Lore said.

The Literacy Summit will be held 8-10 a.m. March 10 in the Wallace Educational Forum.

This Friday marks the closing weekend for the Norvell Theater’s production of “A Midsummer Night’s Dream,” but local students managed... read more