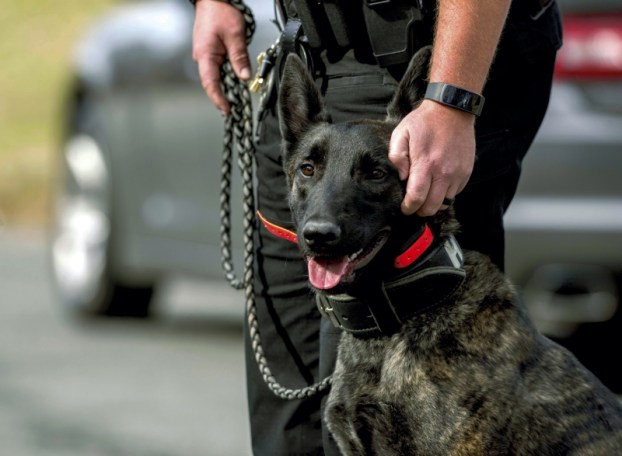 East Spencer Police Officer Barry Seagraves is the town's only K9 handler. He has been working with trainer Mark Shue to get a young Dutch shepherd named Havoc trained for use as a police dog. Jon C. Lakey/Salisbury Post

EAST SPENCER — It took Havoc, a 1-year-old mostly black Dutch shepherd, only seconds to retrieve an airsoft gun hidden in weeds in a field behind the East Spencer Police Department. The calm, easygoing dog is in training to be the department’s first police K-9.

The gun was empty, but finding weapons is one of the fundamentals Havoc is learning as he and his handler, East Spencer Police Officer Barry Seagraves, work toward state certification. Retired veteran law enforcement officer Mark Shue, who is now a Stanly County-based K-9 trainer, has been working with Seagraves and Havoc to get them ready for certifications and to make sure the pair are ready for regular patrol duties.

East Spencer residents and businesses and Seagraves himself have made a total of $10,404 in contributions. Seagraves estimates it will cost a total of $25,000, which will cover body armor for the dog, alarms and cooling systems in his patrol vehicle, as well as additional training for both Seagraves and Havoc.

One of the pieces of equipment Seagraves would like to be able to purchase is a system that would alert 911 if something were to happen to Seagraves as well as automatically roll down the windows and turn on his car’s lights and siren.

The money raised would cover a GPS tracking system to allow 911 dispatchers to locate the dog if a search and rescue takes the K-9 team deep into the woods, as well as food, insurance and vehicle maintenance.

Police Chief Sharon Hovis said Havoc will be more of an article and drug search K-9 and a cadaver dog. He also will go into the schools as an education tool.

Seagraves and Havoc train three times a week for at least three hours a day working on the fundamentals including obedience.

During training sessions, Seagraves places Havoc on and off a lead or long leash and works on tracking and finding articles anywhere from 50 yards to 300 yards away.

Havoc also learns bite techniques in which a person wears a thick bite sleeve and Seagraves gives commands to teach the dog to release. Seagraves has trained with the Concord Police Department and at Charlotte Motor Speedway in Concord.

Shue said the ultimate goal is for Seagraves to have 100 percent control 100 percent of the time.

“Obedience is a building block. A lot of the times, they are loose and not on a lead, and he has to have voice control,” Shue said of Seagraves.

Seagraves and Shue looked at the dog, which came from a family in Chatham County who had intended for Havoc to provide protection. Seagraves said he had a gut feeling about the dog and almost missed a chance to get him. The two men met with the owner and the dog and initially left, but they turned around midway on their way home to get Havoc.

The dog was 7 months old when they first met him, and he was a clean slate.

“I saw a lot of potential. He had a good personality. He was even-tempered. I don’t worry about this dog,” Shue said of Havoc.

Shue has been a K-9 instructor since 1988, when he trained with the Salisbury Police Department.

Shue said there is still more to do, but Havoc has come a long way.

For more information about the East Spencer K-9 program and its Go Fund Me effort, visit https://www.gofundme.com/EastSpencerK9 or email eastspencerk9fund@outlook.com.

By Josh Bergeron  josh.bergeron@salisburypost.com SALISBURY — When Schneider Electric employees came to town for a team-building retreat on Wednesday, they did... read more