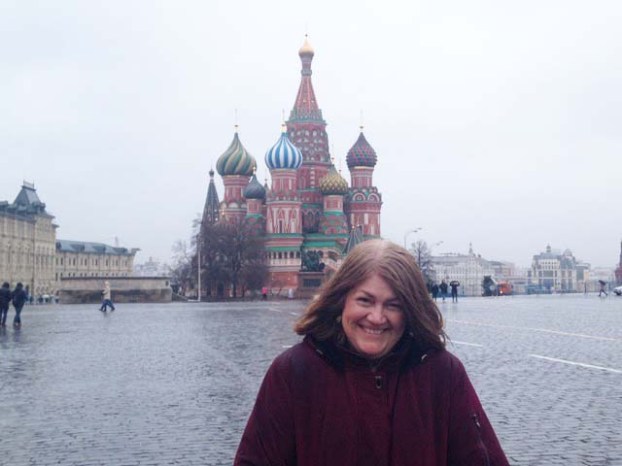 THOMASVILLE — The U.S. Department of State’s Bureau of Educational and Cultural Affairs recently announced the U.S. colleges and universities that produced the most 2016-2017 Fulbright U.S. Scholars. The Fulbright Program is the U.S. government’s flagship international educational exchange program. Top-producing institutions are highlighted annually in the “Chronicle of Higher Education.”

Davidson County Community College is among the few community colleges named to the list. Suzanne LaVenture, director of international education and faculty at DCCC was awarded a Fulbright grant for 2016-2017 to participate in the Community College Administrators Seminar in Russia, a two-week exploration and learning experience in cities across Russia.

“In addition to expanding my understanding of another language and culture, the trip really helped me prepare for the Russian students we’ve hosted on campus this year,” says LaVenture.

DCCC has hosted Fulbright foreign language teaching assistants for the past 5 years and has also hosted Fulbright Scholars-in-Residence from China and Macedonia. Additionally, DCCC hosts international students through various State Department programs. The college also offers students the opportunity to study abroad and has programs in Guatemala, Japan and Ireland in 2017.

“We are proud of our commitment to expanding the cultural competency and international exposure of our campus,” says Dr. Mary Rittling, president of Davidson County Community College.

Rittling will serve as the second consecutive Fulbright Scholar from DCCC. She was selected to participate in the Fulbright-Nehru International Education Administrators Seminar in India this March.

The seminar will provide first-hand knowledge of a cross-section of Indian institutions of higher education. Rittling and other participants will meet with individuals and programs that play a key role in the planning and administration of higher education in India.

Since its inception in 1946, the Fulbright program has provided more than 370,000 participants — chosen for their academic merit and leadership potential — with the opportunity to exchange ideas and contribute to finding solutions to shared international concerns. Over 1,100 U.S. college and university faculty and administrators, professionals, artists, journalists, scientists, lawyers and independent scholars are awarded Fulbright grants to teach and/or conduct research annually. The Fulbright U.S. Scholar Program operates in over 125 countries throughout the world. Lists of Fulbright Scholar recipients are available at: www.iie.org/cies.

The Fulbright program is funded through an annual appropriation made by the United States Congress to the Department of State. Participating governments and host institutions, corporations and foundations in foreign countries and in the United States also provide direct and indirect support.

In the United States, the Institute of International Education’s Council for International Exchange of Scholars administers and coordinates the activities relevant to the Fulbright U.S. Scholar Program on behalf of the Department of State, including conducting an annual competition for the scholarships. The Fulbright program also awards grants to U.S. students and teachers to conduct research and teach overseas. In addition, some 4,000 new foreign Fulbright students and scholars come to the United States annually to study for graduate degrees, conduct research and teach foreign languages.

For more information about the Fulbright Program, visit http://eca.state.gov/fulbright.