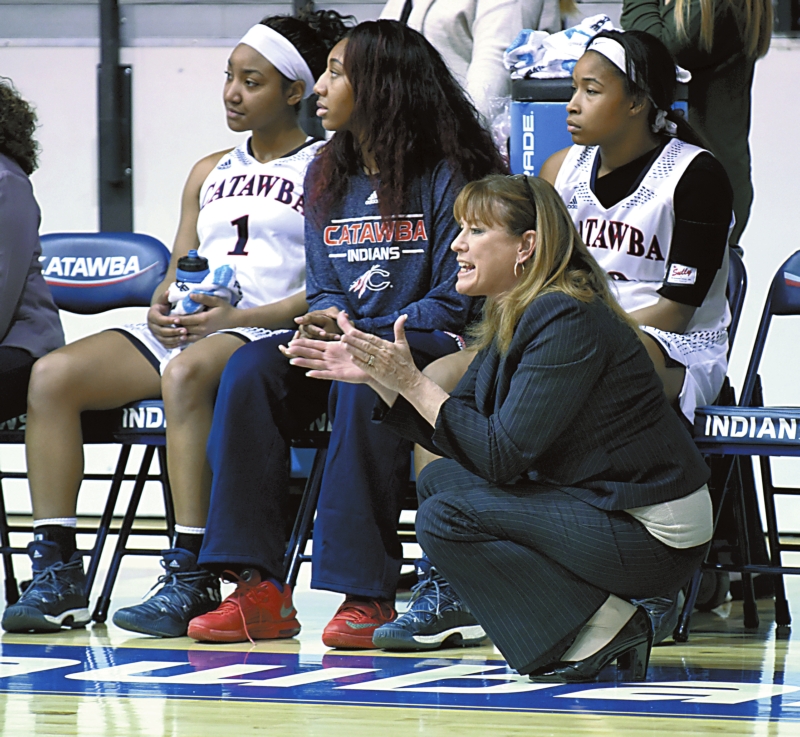 SALISBURY — It was difficult to determine if Catawba just ran out of gas or if Wingate simply found another gear.

Catawba fell to 15-11 and 12-9 in the conference, with one regular season game left to play.

Was winning coach Ann Hancock mad because her team wasted a couple of large leads in the contest or glad they had the will to pull it out?

“I am just happy because the final score showed we had more points than they did,” Hancock said. “Catawba is a great team. We knew they would keep fighting, but I am proud of our girls for not letting it spiral into something more.”

The Indians actually enjoyed a hot start as junior forward Terri Rogers ignited an effective transition game in the first quarter to quickly put her team up, 9-4. But Wingate went ahead, 12-11, at the 3:55-mark on a lefty hook by 6-4 center Marta Miscenko.

From there, the Bulldogs went on a 23-10 rampage that put them ahead, 39-21, with just under two minutes left in the first half.

Catawba responded by closing out the half on an 11-0 run as Rogers and freshman guard Madi Hallman led a pressing defense and produced numerous steals to close to within 39-32 at intermission.

“We just picked it up and started running and talking to each other,” said Rogers, who finished with a double-double (17 points, 10 rebounds). “I was really proud of us for playing so hard until we were dead dog tired.”

The momentum carried over into the third period as Catawba got as close as four (41-37) on a long 3-pointer by guard Serena Brown. Wingate responded again, however, and this time Catawba had nothing left. A 3-ball by Courtney Robinson, a three-point play by Kristina Rumplasch and a string of rapid fire fast breaks by guard Caroline Averette expanded the lead to 66-52 with eight minutes left.

“We played really hard the whole game,” Catawba coach Angie Morton said, “but we just made mistakes and missed some shots we normally make. We were just tired because it took a lot to come back.”

The loss ended a modest two-game winning streak for Catawba as they close out the regular season at home on Saturday against the other top team in the SAC, Lincoln Memorial.

The finale takes on added significance as the top eight teams prepare for the SAC Tournament, beginning March 1. LMU was upset last night by Anderson, 76-73, elevating Wingate into a tie for first place. The Bulldogs close out at home against Anderson.

“I would appreciate it if Catawba would beat Lincoln Memorial on Saturday,” Hancock said. “That would really be good, especially if we can beat Anderson.”

Catawba, meanwhile, is trying to prepare for the upcoming tournament and regain some momentum. The Indians could be seeded anywhere from fifth to seventh.

“It is a tough way for us to close the regular season — against the top two teams,” Morton added. “We don’t know who we will play in the tournament first, but whoever it is and wherever it is, we will be ready to go.”

Rogers led the Indians with her double-double while Bri Johnson scored 11 points, followed by Hallman and Brown with 10 each.

The Bulldogs placed just two in double figures, led by Averette with 17 points and Robinson with 13. But nine of the 10 players who saw action scored, including three Bulldogs with eight points each.