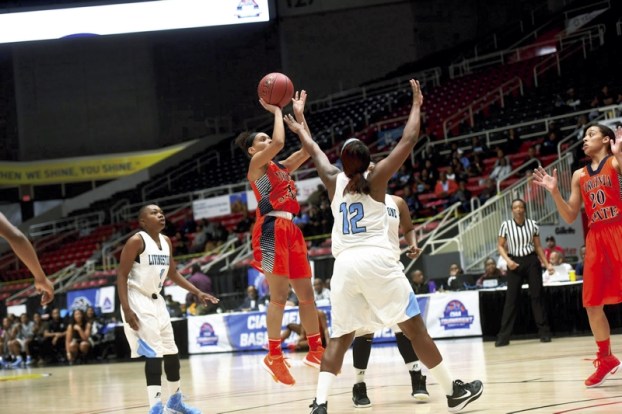 CHARLOTTE — The 2017 CIAA tournament has come and gone for Livingstone’s women’s basketball team.

“It’s not the outcome we came here for,” first-year coach Tiffany Silver said after Livingstone (14-13) shot just 27.3 percent from the field. “It came down to possession basketball, and in the end, we gave them the ball. It’s all about taking care of the ball in crucial moments.”

Livingstone’s failure to grab defensive rebounds in the waning seconds proved decisive. It allowed Virginia State (21-7) second-chance opportunities twice in the final eight seconds of overtime. The Trojans capitalized by sinking three of their last four free throws and went 9-for-14 from the line in OT.

“We just didn’t box out,” senior Brittany Taylor said from the post-game podium. “They kept fighting for it and we stopped executing. It’s like they wanted it more.”

Livingstone’s last field goal — Taylor’s picturesque 3-pointer from the top of the key — gave the Blue Bears a 60-57 lead with two minutes to play. That’s when Livingstone unraveled by committing six fouls, turning the ball over three times and missing a free throw that would have tied the score with 32.5 seconds remaining. Not surprisingly, it was outscored, 9-1, down the stretch.

“Once all that happened,” Silver said, “we gave in to it. We gave a reaction and dropped our heads, which we shouldn’t have done. With two minutes, there’s so much time left, so many possessions left. We folded. We just folded.”

Credit VSU, which dropped a 78-63 decision to Livingstone when the teams met Jan. 8 at New Trent Gym. It overcame a pair of eight-point, first-half deficits and still trailed, 30-24, after Blue Bears’ sophomore guard Zena Lovette (24 points, 17 rebounds) powered her way for a layup midway through the third quarter.

“We had to stay focused today,” said winning coach James Hill, Jr. “You can’t drop out if they score. You’ve got to make stops.”

Virginia State’s turnaround began late in the third period when six-foot senior Tierra Richberg tapped in a layup and teammate Domonique Hagins hit back-to-back set shots — the second on a fadeaway from inside the lane as the quarter closed, providing a 39-34 VSU lead.

“We were trying to take their main people out of the game,” senior Joy Hickman said after contributing 15 points, 10 rebounds and three blocked shots for the Trojans. “And trying to play, trying to use what they were giving us.”

Livingstone charged back and tied the score 41-41 when Lovette hit three free throws with 5:43 remaining in regulation. A minute later, teammate Deonna Young’s three-point play tied it again. LC was ahead by two points, following Taylor’s last-minute free throw, but Virginia State forced overtime when Hagins corralled a rebound, drove the length of the court and hit a layup with just 6.1 seconds to go.

“We were pretty determined,” said Virginia State’s Nandi Taylor, the game’s MVP. “We knew if we lost, our season would be over.”

Not to be overlooked was Lovette’s fierce performance. She played with great enthusiasm, shooting 8-for-17 from the floor and grabbing seven offensive rebounds before fouling out with 16 seconds remaining in OT. On a day when the Blue Bears did little right, Lovette could do very little wrong.

“She played her game,” said Silver, of Lovette’s effort. “She missed a lot of little chippies early on, but she was relentless. She gave her best today.”

Even her best wasn’t enough to extend Livingstone’s season.

NOTES:  VSU shot 2-for-20 on 3-pointers, yet advanced to today’s semifinals at the Spectrum Center. It meets fifth-seeded Lincoln, the tournament’s surprise team after edging No. 1 seed Chowan in the quarterfinals. … Livingstone was 18-for-66 from the floor and had 18 turnovers. Young (16 points) and Taylor (11 points, 7 rebounds) gave the Blue Bears three scorers in double figures.

Johnson’s 8th title could stake claim as best ever