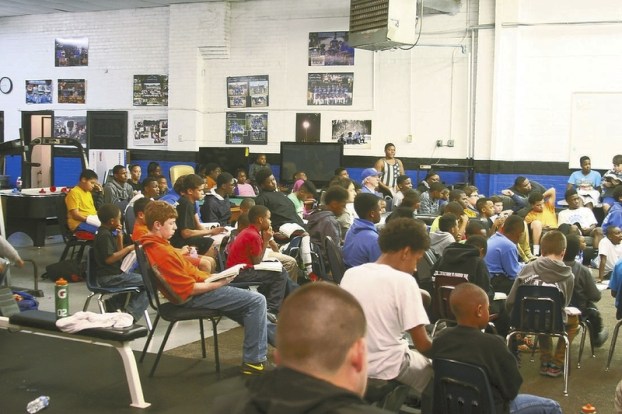 Power Cross, a Christian ministry in Statesville, plans to expand into Salisbury by midyear.

The nonprofit organization serves boys and men from age 7 through college age with support in academics, athletics and spiritual life.

Founders Jeff and Natalie Storment began Power Cross when their son, TJ, felt led to invite his friends over for a Bible study after school. A small group rapidly grew into something larger.

“That first afternoon, there were four kids. The next week, there were eight. Soon we had 40 kids coming,” Natalie Storment said.

The youth would meet one afternoon a week for a time of devotion, then head outside to play football.

Through football, the Storments discovered another need among the youth involved in the Bible study. Of the 40 kids who were regularly participated in the post-study athletics, only three would show up for their school’s football tryouts. The Storments realized that money was a factor and decided to sponsor the boys’ athletic endeavors themselves.

In a leap of faith, Jeff Storment left his full-time job to focus on the ministry. Today, Power Cross serves more than 250 young men from across Iredell County. It operates in a facility in downtown Statesville complete with athletic fields.

Students in the program have access to daily discipleship, athletic teams and training, academic support and college preparation, and free meals at the Power Cross facility.

“We devoted ourselves to helping these kids more in-depth with their academics, nourishing them with food and helping them grow into Christ-centered young men,” Natalie Storment said.

The decision to move into Salisbury came as the Storments noted that many participants were moving from Statesville to Salisbury and back again. Moreover, the needs of the two communities are similar: both have problems with a lack of revitalization in low-income areas, and young men in both cities are drawn to participate in gangs, the Storments said.

Power Cross seeks to be a positive alternative to gang involvement.

“Research shows that most young men who are involved in gangs have the desire to be a part of a group,” the Power Cross website says. “Many of the young men fighting in the school and on the streets just have a competitive spirit and need an outlet for their intensity. With Power Cross, we hope to offer young men an alternative to the gangs and trouble that they find on the streets.”

The Power Cross board will meet over the Rowan-Salisbury Schools’ spring break to discuss plans for the expansion. It plans to develop a youth football team in the area by the fall.