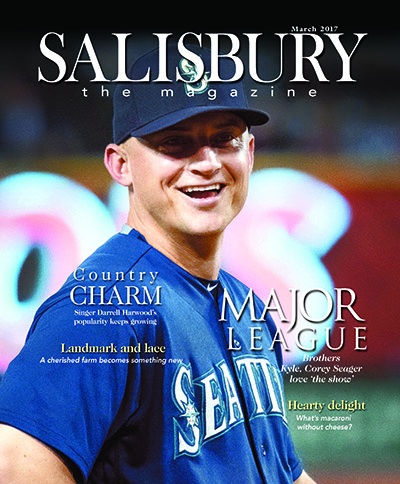 A peek into the March 2017 SALISBURY the magazine As evidence I have no life, for the past 30 years I have dedicated huge chunks of my time to playing a variation of fantasy baseball — the original version called Rotisserie.

Every April, I am one of a dozen guys who gather at Gary’s Barbecue for a draft day in which we spend about four hours bidding fake money on American League players to add to the handful we have decided to keep from the previous season.

We become owners of a team — players for every position — and from then until the end of the season, we follow the statistics of our 24 guys and hope they rack up as many points as possible in eight different statistical categories such as home runs, runs batted in, batting average and the like. From the beginning, my team has been called the “Mark’s Brothers.”

Sportswriter Mike London has been part of this fantasy league for many years, and in recent seasons I have been jealous of Mike’s team because his roster has included third baseman Kyle Seager of the Seattle Mariners. Mike surely will keep Seager on his team again this year because of just how good Kyle is.

In this issue, London brings us the story of  the Seager family, the Kannapolis clan that has produced two major league stars in brothers Kyle and Corey, with possibly another brother, Justin, waiting in the wings.

Joe Hubbard had the pleasure of coaching all three Seager brothers at Northwest Cabarrus High, so it’s understandable he closely follows their baseball careers. Hubbard traveled to Seattle last season and saw Kyle Seager smash a home run, one of 30 he hit for the Mariners in 2016.

Corey Seager, the reigning National League Rookie of the Year, plays for the Los Angeles Dodgers.

“This year it’s going to be L.A., to see Corey,” Hubbard told London. “I know how fortunate I am. A lot of guys coach high school baseball a long time and never coach a major leaguer. I got to coach two really good ones.”

I think you’ll enjoy London’s story on the Seagers, with a focus on Kyle, and come away appreciating just how talented — and unassuming — they all are.

Elsewhere in this issue, Josh Bergeron writes about singer Darrell Harwood, who is one of our major league music talents from China Grove. As you will see, Harwood and his band have a dedicated following of fans and family.

Deirdre Parker Smith has cooked up some great recipes for a food that was a staple of mine in college — macaroni and cheese — except mine was out of a box, not these sumptuous dishes Deirdre describes.

You’ll enjoy meeting travel writer Robert White-Harvey, who easily could be nominated for the world’s most interesting man title. We also visit the historic Henry Connor Bost House and Farm, once a cherished getaway for the Lomax family and now a unique special events venue.

Rebecca Rider brings us two great stories related to schools. You’ll get a behind-the-scenes look at how Food for Thought provides weekend nourishment for students in need, and Rider reminds us what a treasure we have in the one-room Setzer School, still a valuable educational tool at Horizons Unlimited.

This month’s Rowan Original is Reid Leonard, the great director Piedmont Players Theatre has depended on for more than 30 years.

But back to baseball: London notes that Kyle and Corey Seager have yet to oppose each other in a major league game, and the regular season schedule doesn’t have it happening this season, either. Hubbard, their old high school coach, told London he’ll stay neutral if that matchup ever occurs, and he’s careful never to say one Seager is the best.

“People tell me there’s no way anyone ever had a better senior season than Corey did,” Hubbard told London, looking back. “But I had one senior who was just as good — and that was Kyle. I don’t remember Kyle missing a pitch his senior year. If he got a pitch to hit, he hit it hard.”

Ah, baseball.  Ah, spring training. There are no better words to hear this time of year than “Pitchers and catchers report.”

Yesterday: Ready for a road trip

Dorothy Kirk has provided several ‘Yesterday’ photographs to the Post. Two of the previous photos were connected to her grandfather, A.B.C. “Chubby”... read more