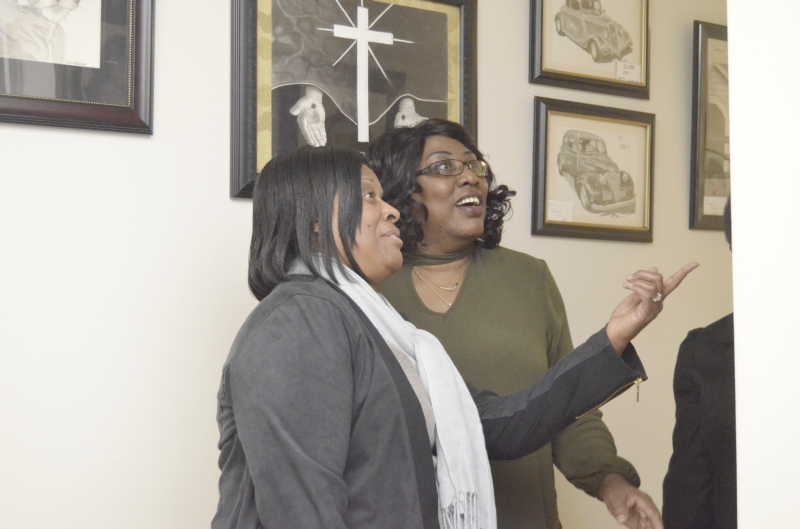 Artist Delores Medlin, right, shares a piece of artwork with friend Sherry Ford, at her first exhibit at E & M Gallery, located on South Main Street. Medlin has been drawing since she was a child and partnered with gallery owners Elijah Belton and Mickey Chambers for the exhibit that also features prominent figures in black history. The gallery is located in a shared space with Two Dots & a Mae Resale store. Shavonne Walker/Salisbury Post

SALISBURY — As far back as she can recall, Delores Medlin has always had a pencil in her hand. She drew as a little girl and has continued that gift into adulthood. Medlin, of Salisbury, still draws in pencil, but at a higher skill level.

She welcomed friends and family at a weekend exhibit at E&M Art Gallery, where 18 of her pieces were on display and will continue to be on display for a few months to come.

The gallery is located at 917 S. Main St., Suite C, in a shared space with Two Dots & a Mae Resale store. The resale store is owned by Esther Atkins Smith, Hilda Bost and Judy McDaniel.

The art gallery gets its name from business partners, Elijah Belton and Mickey Chambers, two artists who create pieces that utilize less common mediums. Belton’s work is primarily pencil drawings filled in using crayons, but he also creates pieces out of acrylic and water colors. Chambers only draws and fills in his pieces with bright, colorful markers.

Belton met Medlin when they both had work on display at an art exhibit at the Salisbury Civic Center in November.

Medlin said although she’d drawn as a child, she stopped, but picked up a pencil seven years ago.

She began by drawing inspirational pieces like her picture of a ship in turbulent water that she titled “Peace Be Still” after the scripture where Jesus Christ calms the waters during a storm.

“I started drawing inspirational pieces. If I like it, I just go for it,” she said.

Her drawings have included the spiritual to vintage cars, animals, famous faces and friends. All of her drawings are ones based on photographs. She gets insomnia often and will begin drawing.

Some of her current art can be seen in local beauty salons and barber shops, while some of her past pieces have been on display at the Rowan Museum, the Spencer Doll & Toy Museum and the Rowan Public Library, Medlin said.

The Wilmington native has been married to her husband Michael for 38 years and they have three children. The couple have lived in Salisbury for 32 years.

Jason Holliday, Delores Medlin’s godson, dropped by the gallery to support her and see her pieces.

“I’m extremely proud. She shows us there’s a different way to express ourselves. She is dedicated to her gift,” Holliday said.

He and his family have also received many of Medlin’s works for gifts over the years.

“I love that woman very much,” he said and embraced her in a hug.

Queena Provoid, also an artist, was invited to the exhibit by Mickey Chambers.

She enjoyed the exhibit and said she hopes one day her work can be displayed. Provoid does cartoon work. E & M Gallery co-owner Elijah Belton stands before some of his artwork that includes prominent figures in black history and locally known African Americans. His work along with business partner Mickey Chambers have their work on display with featured artist Delores Medlin. The gallery is located on South Main Street in a shared space with Two Dots & a Mae Resale Store. Shavonne Walker/Salisbury Post

Frank Eppolite a friend of Belton’s came out to the gallery exhibit to support Belton and the other artists.

Sherry Ford, a friend of Medlin’s came with her mother and friend to the exhibit. Medlin and Ford also attend the same church, Gethsemane Missionary Baptist Church in Salisbury.

Ford came to know Medlin’s art after she asked the artist to create something for Ford’s parents wedding anniversary. Medlin drew a picture of the car that Ford’s mother Sarah Stowe and her father the Rev. James L. Stowe courted in, which was on display at the exhibit.