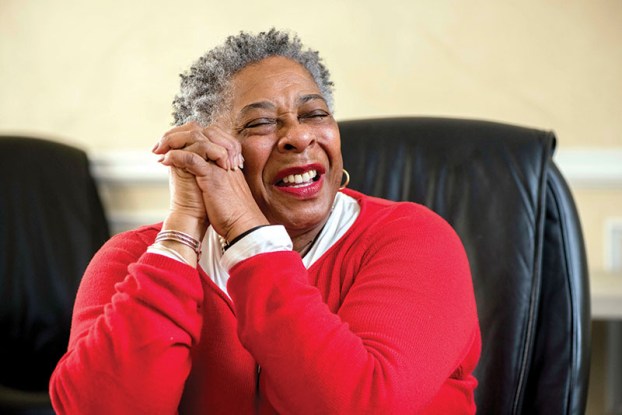 SALISBURY — In 1973, Audrey Smith had graduated from Livingstone College with a degree in sociology destined to be a social worker, but that dream of helping Rowan County families didn’t quite materialize the way she envisioned.

A year after graduation, Smith worked at the Salisbury-Rowan Juvenile Bureau, where she looked into child cases, sort of a department of social services division. When the bureau disbanded, Smith and fellow bureau member Charlie Herion moved to the Salisbury Police Department and John Noble, another member, went to the Rowan County Sheriff’s Office.

Smith automatically became a Salisbury Police investigator. The 26-year-old not only was an investigator, but she was the first black female investigator the department had ever had. There were other black officers before her, including Rayford Graham in the late 1940s, as well as Ernest Davis, and Price Brown in the 1960s and 1970s, but all had been male.

There was even Sarah Chunn, a black meter maid who worked in the early 1960s and 1970s, but none before Smith had ever been a lady cop and definitely not an investigator.

Smith, now Audrey Cunningham, recently reflected on her four years with the police department and what led her back to her alma mater.

Cunningham estimates she worked as an investigator for about a year and “solved some cases too,” but eventually felt she needed some of the fundamentals of a beat police officer and decided to start over as a patrol officer.

“You have to know the territory and the people so I had to back up and go to patrol,” she said.

Cunningham had no law enforcement experience and was pretty green about police work. In fact, early in her career she attended an event at a church, left her purse with her gun inside and returned to find both gone. Eventually, Cunningham attended the uniform academy that most officers of the time attended in Salemburg, N.C. She would also learn from her peers about police work.

One of the most interesting moments of her career outside of drug cases, was a house moving project at Fulton and Horah streets that required police officers to walk with the house as movers hauled it through the city streets.

The house move was a major project that Cunningham said was the turning point that led her to become more involved in the community. There was also veteran officers who would “endorse” her or vouch for her with others in the community.

“I was a reserved person so it would help me interact with people,” she said.

People often confused Cunningham with meter maid Sarah Chunn, although the women looked nothing alike. Cunningham was shorter and had a lighter skin complexion than Chunn.

She recalled once writing a ticket for a speeder who asked her if she was a “real cop or the meter maid,” Cunningham said.

Some people even called Cunningham, Christie Love, a character from a 1974 television film about a black female undercover detective.

“Some older people still call me Christie Love,” she said.

Christie Love may have been among a popular genre of 1970s black crime films, but in real life, it wasn’t popular to be a black female police officer, Cunningham said.

“There was a difference in the way we were treated,” she said.

Black officers were ostracized in their own communities because they were law enforcement and sometimes they had to enforce the law amongst their own race. Cunningham also saw some of the older black officers who had not progressed in their careers like their white counterparts.

There were areas within the department that she wanted to learn new skills like forensics, but those changes to incorporate Cunningham into a role other than a patrol officer were slow coming.

Her integrity was her biggest asset and no matter what her role at the police department or who she encountered, Cunningham always lived by the same philosophy and that was to be “fair, firm and consistent.”

Even though she was the only black female officer for a time, Cunningham said she didn’t really feel out of place.

“You decide whether you let it deter you or take this and climb over it,” she said.

Police work was hard, Cunningham admitted, maybe even more so for black officers of the day.

“I had to follow the rules, no exceptions. I had to be that stellar person,” she said.

Police work gave Cunningham a broader perspective on life including what it was to be respected and give respect.

Once she began to look harder, she discovered police work was like social work.

“It’s more about the people you serve,” she said.

“I made a lot of friends and I learned a lot,” Cunningham said of her time in law enforcement.

Two lessons she learned were to “follow your dreams and don’t let obstacles keep you from where you want to go,” she said.

Dealing with the public prepared her for the various occupations that she would have after her work in law enforcement.

Cunningham worked three two-year terms as a Rowan County magistrate, making her the first African-American female in the position. Her years as a magistrate, she said, were really where she learned more about the law and criminal justice.

In those days, Cunningham felt she served Rowan County citizens better as a magistrate than a police officer.

“As a magistrate, you could change the path of a young person,” she said.

In the 1980s, Cunningham became the director of security at Livingstone College where she’d spent time as an undergraduate. She even worked at Piedmont Correctional Institute, colloquially known as the High Rise, as a corrections officer and admission technician.

In mid-2007, Cunningham was the assistant program director for two years with the NASA Science Engineering Mathematic Aerospace Academy (SEMAA) at Livingstone College. The NASA-sponsored program was for Rowan County elementary and middle school students.

Since 2006, Cunningham has been the administrative assistant/transcript coordinator at Livingstone College.

“The political structure has changed,” she said, and “there is a lack of respect for police today.”

Some of the ideals from the 1970s of officers who “back then had the mentality that their uniform gave them privilege” still exists today, Cunningham said.

She said police work comes down to respect as well as treating others how you want to be treated.

There were no newspaper articles ever written in the early 1970s about Audrey Smith, the first black female police investigator, but it doesn’t take away from what she did while she was there.

“It was just something God placed before me to do,” she said of law enforcement.

Editor’s note: This is the second part of a two-day series on teen dating violence. For the purpose of anonymity,... read more