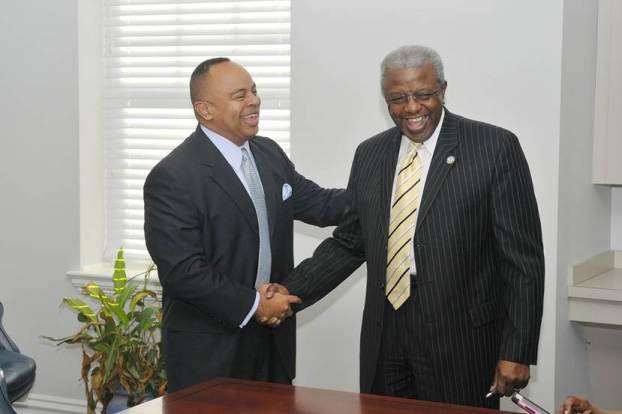 SALISBURY — This year, the celebration of Livingstone’s Founder’s Day was marked by the exchange of gifts. During the celebrations, held Thursday, Feb. 9 at the college, Dr. Jimmy R. Jenkins, president of Livingstone, announced that the Board of Trustees voted unanimously to rename the college’s Division of Business as the Bishop George E. Battle, Jr. School of Business. The school will be housed in a new building, which will also bear Battle’s name.

Battle, a Rocky Mount area native, is a graduate of Livingstone College and of Hood Theological Seminary.

Battle was moved by the announcement, and invited his wife, Iris M. Battle, onto the stage. Together, the two announced that they had their own gift for the school: a $100,000 contribution to the college’s budding capital campaign.

Bishop Battle expressed great gratitude for the college which gave him a chance to become what he is today,

“God has blessed me in unbelievable ways — with a dedicated and loving wife and family and with an extended family — the AME Zion Church, a church that thought it not robbery to elevate me to the episcopacy of our denomination,” he said. “I am blessed to serve as the Senior Bishop of the AME Zion Church and the chairman of the board of trustees of my alma mater, Livingstone College, which took a chance on me — a poor boy from Rocky Mount, North Carolina. This gift that my wife and I give is but a token of appreciation for the bountiful blessings we have received.”

Battle is one of the largest contributors to the college.

Stony Sellers, founder and president of StoneLaurel, a technology and management consulting firm located in Charlotte, was the speaker for the event.

Sellers told guests how he was able to leverage his Air Force technology training into what he described as helping people and companies maximize their potential. Stoney talked about the founder of the college, Dr. Joseph Charles Price, and his ability to transform men and society.

“Joseph Charles Price had the fortitude to move ahead and propel the masses through education, spiritual awareness and heart,” he said.

Founder’s Day is the celebration of Price’s birthday and the beginning of Livingstone College. This year marks the school’s 138th year.

Price, born in New Bern, was groomed for church leadership by Rev. James Walker Hood and his wife. He developed into a powerful preacher and renowned orator and was recognized for his talent throughout the AME Zion Church. Price started the school, then named Zion Wesley Institute, in Concord, but eventually moved the college to Salisbury, where it was renamed in honor of British missionary and physician David Livingstone.

Under the leadership of 12th president, Dr. Jimmy R. Jenkins, and with the support of the board chairman and collective members, Livingstone College continues to generate the backing of distinguished supporters. During the event, Sellers, Rev. Katheryn Brown and David Aiken were each awarded the college’s honorary doctorate degree in recognition of their contributions to society.

SALISBURY — A man and woman were taken to the hospital Friday night following a shooting into a South Shaver... read more