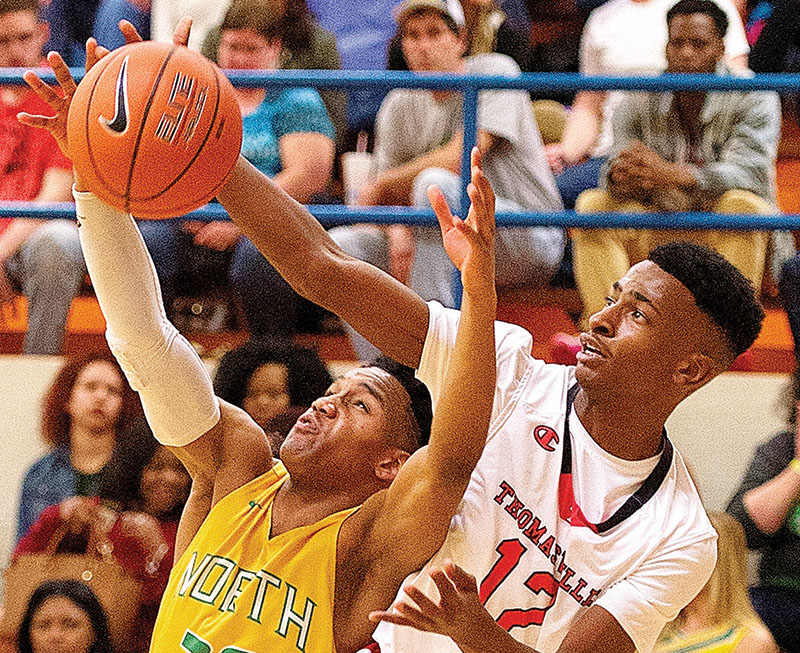 North Rowan's Brevin Goodlett (left) and Thomasville's Cameron Whiteside battle inside for the ball during the championship game of the Central Carolina Conference tournament on Friday night. [Donnie Roberts/The Dispatch]

LEXINGTON — North Rowan’s boys basketball team threw itself into its work Friday night, only to have its work throw it back.

The Cavs’ quest to win the CCC tournament title it was denied last year ended in disappointment at Lexington High School, where top-seeded Thomasville forced three last-minute turnovers and fled the scene with a 74-71 championship game victory.

“It was hard-fought loss, but we didn’t make plays in the end,” coach Andrew Mitchell said after North (14-11) dropped its third decision to Thomasville this season. “And we didn’t keep our heads. That’s what’s so disappointing.”

It was a ferocious effort by North, which spent most of the second half swimming against the current, trying to keep pace with the run-and-gun Bulldogs (21-3). It fell behind 41-38 when Thomasville’s Cameron Whiteside hit a 3-point splashdown from the left side early in the third quarter and only caught up once — when turf-toed senior Joe Scott converted a pair of free throws to the score 63-63 with 2:43 remaining.

“There was a lot of pressure when you get down to the end of the game,” Scott said after pacing all scorers with a career-high 35 points. “We just didn’t have enough time.”

Yet they had a chance. Down 67-65, the Cavs forgot to play defense on an unchallenged drive to the hoop by Jahare Taylor-Thomas. His uncontested layup gave Thomasville a four-point lead with 1:28 to play.

“A missed assignment,” Mitchell said. “Nobody picked him up.”

It was Thomasville’s final basket. North’s sloppiness continued in the waning seconds, but it somehow kept its heart ticking. The score was 69-66 Thomasville when Mitchell called a timeout with 49 seconds hanging on the clock. Straight out of a huddle, four seconds later, a traveling call against North turned the ball over.

“Those late turnovers hurt,” senior Henderson Lentz said. “We made some mistakes in the end and let it get to our heads.”

It reached a boiling point when North’s Malon Herron-Cuthbertson — a steady, reliable senior — was called for a technical foul with 27 seconds remaining. And although Taylor-Thomas missed two ensuing free throws, Thomasville’s Sadiq Johnson was immediately fouled and converted the first of two, restoring a four-point advantage.

Lentz, who scored 20 points despite night-long foul trouble, cut it to 70-68 with a layup with 18 seconds to go and to 72-71 with a tape-measure 3-ball from the left side with five seconds left.

“We did things pretty well,” he said. It just came down to keeping our heads and making the right plays.”

Scott made most of them. He scored 21 points in the second half and hit a pair of 3-pointers in his final conference game. “We had no answer for him,” said winning coach James Atkinson. “He’s the kind of guy who can take over a game and carry a team.”

Thomasville actually had an answer to Scott — Taylor-Thomas, who scored 16 of his team-best 25 points in the second half. “He’s like our Tom Brady,” said Atkinson. “Someone you can ride all the way to the finish.”

The game ended when Scott launched a tightly contested, 60-foot Hail Mary that fell short. It did little to soften the blow for a team that deserved a happier ending and a chance at closure. Instead, the Cavs left with more than just their egos bruised.

“It’s not what we wanted,” Mitchell. “We always want to win, no matter what. This team has fought through so much since last year — and to get all the way to the championship game is pretty good.”

NOTES: Pairings for the 2A state tournament will be announced today and North will likely open the post-season on Tuesday. … Both Scott and Lentz had 14 points in the first half. North finished with 16 turnovers. … The victory was Thomasville’s 16th straight. Whiteside had 23 points for the Bulldogs, including 12 in the third period.