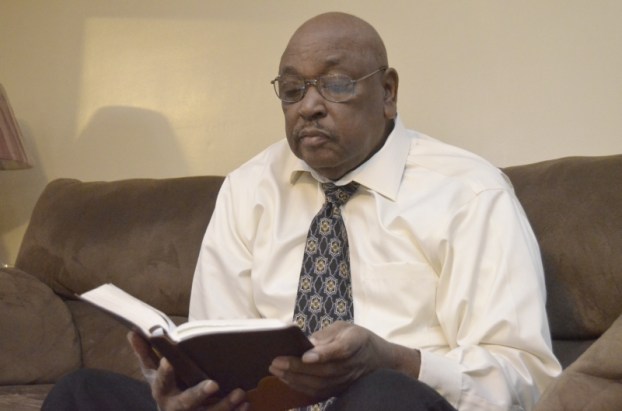 Willie Evans Jr. reads his Bible while sitting in his living room. Evans, a longtime church custodian at Southern City AME Zion Church in East Spencer, will be this year's Legacy of a Leader recipient. Shavonne Walker/Salisbury Post

Willie Evans Jr. to be honored with Legacy of a Leader award by Southern City AME Zion Church

Perhaps Evans’ willingness to not shy away from hard work came from being one of 10 children and growing up “in the country” in his native Winnsboro, S.C. Or maybe it came from his grandmother, Sue Pearl Evans.

From wherever or whomever Evans inherited his predisposition to hard work, the 70-year-old is not letting go of it easily.

He has for 38 years been the custodian of the East Spencer church, taking care of the physical needs of the building and being there for its congregation.

Evans will be honored Sunday with this year’s Legacy of a Leader award at the church. It’s an annual award that was created by members of Southern City church to pay tribute to those in East Spencer who have dedicated their time to the community and its people.

Evans’ father, Willie Evans Sr., was also the church custodian for a number of years before the younger Evans took over the duties.

Evans also has driven the church bus to programs and been a church steward making sure all offering money is accounted for. He’s now serving on the trustees board and is vice president of the usher board.

“I love my church. I love going with my wife,” Evans said.

Evans, recently sidelined by illness, doesn’t quite get around like he used to, but his heart is still with the church and his regular responsibilities. Heis often reminded by his wife, Ethel, that other church members have got it all under control.

The family raised hogs and chickens. Willie and his siblings had to haul water and chop wood.

He said being one of 10 children made him quickly realize he wanted a much smaller family when he was older. He and his wife have two children, Rodney and Carla.

When Willie turned 6, his family moved to East Spencer for a better opportunity. He would eventually graduate from Dunbar High School, where he met his future wife, Ethel Kelly. The two were 16 then and have been inseparable since.

Evans attended the North Carolina Truck Driving School in Raleigh but soon realized trucking was not the career for him. When he was 16, Evans worked after school at Howard Johnson Motor Lodge, and he continued uninterrupted for 50 years at several jobs until his retirement in 2012. While at the hotel, Evans was a chef and washed dishes, he said.

He worked at the former Carolina Rubber Hose, now HBD Industries, for 21 years and was the lead person in his team. When a new company took over, reducing pay and benefits, Evans quit and went to work at Norandal USA, now Granger, where he worked for 25 years until he retired.

Evans has always loved cars. He has a 1965 Bonneville that he hopes to fix up once he’s in better health.

In his retirement years, Evans and his wife, along with their friends and family, have traveled to the Caribbean and Jamaica, as well as Las Vegas, New York, New Jersey, Dallas, Arizona and Myrtle Beach.

He ran a small lawn service during the summer for family and neighbors. He would mow lawns and otherwise help those in the community, including being the self-appointed neighborhood watch. If there’s an unknown car riding through his neighborhood, Evans likely knows about it.

Before his health problems, he would regularly walk two to three miles a day.