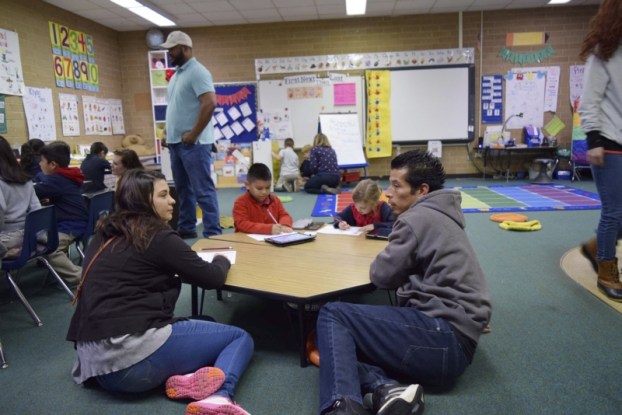 Parents sit in on a kindergarten classroom at Knollwood Elementary School in February for the school's annual "Heart to Heart" program, which invites parents to learn about what's happening in their child's classes. Rebecca Rider/Salisbury Post

On Wednesday morning, Stoner went to the office at Knollwood Elementary School after dropping Gemma off to find out what was going on.

Knollwood Principal Shonda Hairston said that roughly 300 parents RSVP’d for the school’s yearly “Heart to Heart.” But many, like Stoner, simply showed up. It’s the eighth year Hairston has hosted Heart to Heart, which brings parents to the school and gets them thinking about their children’s education.

This year’s theme was “The heart of reading.”

Parents and family members spent an hour in the classroom, observing or helping their child with work. Some teachers, such as Gemma’s, planned an activity for parents and students to do together.

“I like to see her little brain working and how they’re learning,” Stoner said.

Visiting Gemma’s classroom helped Stoner realize just how much things have changed since she was in first grade.

“I think it’s neat,” she said of the program. “I think it’s interesting to have the parents involved in what they’re doing in the classroom so far.”

On the kindergarten hall, Rhonda Cleary worked with granddaughter Emma to put words in the correct order to form a sentence.

“The kids need to know that their parent or grandparent is there to show them support and to love them,” Cleary said.

Nearby, Cassie Timms said she feels that not a lot of schools encourage interaction from parents — especially inviting them into the classroom. But sitting in on her daughter Khloe’s class helped her understand the growth she has seen in her reading ability and enabled Timms to work with her daughter outside school.

“It gives me knowledge to help her,” she said.

After classroom observations, parents sat down for a learning session with Hairston for information about summer slide, dropout rates and vocabulary gaps.

“I want to create an awareness,” Hairston said.

The parents also discussed how they could inspire and encourage a love of reading in their children and how they can be good role models.

“So they leave, I think, with a greater understanding of what we’re doing and how they can help at home,” she said.

Parents who RSVP’d were asked to list a book that affected them as a child. The school ordered copies of those books and gave them to the parents, thanks to Title I school involvement funding and help from the PTA. Lunch was provided for the parents who attended.

“I like parents to come in and to learn and to be a part of,” Hairston said.

By Josh Bergeron josh.bergeron@salisburypost.com DUKEVILLE — When it’s time to decide between a water line and a filtration system to remedy... read more