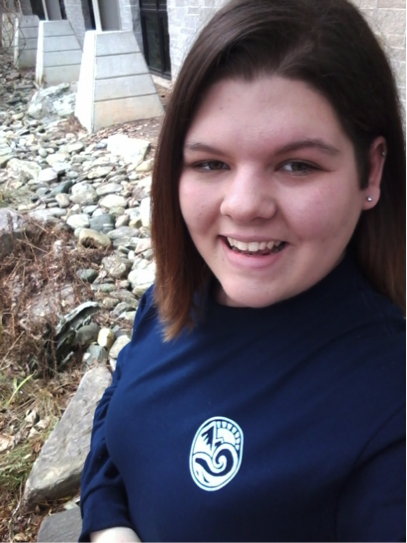 SALISBURY — As a Rowan County native, Macayla Upright was no stranger to Catawba College when it came time for her to decide where to go after high school. In fact, she can recall sitting in the back seat at a very young age as her mom drove through the college campus.

However, her first real experience with the school came when she was 12 years old at a camp called C3, or the Catawba Conservation Camp, hosted by the Center for the Environment.

“It was an all-girls’ camp that focused on learning about environmental issues and the solutions to those issues,” said Upright.

While participating in C3, she got to stay in the Barger-Zartman Residence Hall for the week. At the camp, Upright was able to analyze small animals in the preserve with Dr. Constance Lowery, learn about birds with Dr. Joe Poston and go on trips to local places to put environmental issues into a real-life perspective.

For instance, she remembers going to Harris-Teeter and analyzing the differences in “wild caught” and “fresh caught” fish right in the store itself.

Upright said she feels as though the camp experience has come full circle; she remembers meeting her current academic major adviser, Dr. Sue Calcagni, at the camp.

The C3 camp wasn’t the only time Upright got to come to campus before becoming a college student, either.

She was also a part of the “Redesigning Our Future” National Environmental Summit for High School Students, first coming as a rising senior and then getting the rare opportunity to be a counselor as a rising college freshman.

The National Environmental Summit is a five-day, four-night camp where students, ages 14-17, get to stay on campus and learn about the environmental issues prevalent in our world today. The summit also trains the students to be leaders and to lead by example when it comes to environmental sustainability.

However, the coolest part of the summit is that it is programmed to be interesting for people of all talents and passions through the use of focus groups.

Since Upright likes to be outdoors and work with animals, she chose the focus group that allowed her to go out in the Stanback Ecological Preserve and catch turtles to study and tag. Other summit focus groups study topics like writing a camp blog, philosophical reasoning and even theater.

Upright was able to become a counselor as a rising freshman because of the relationship that she built as a summit participant with the Center for the Environment’s director of operations, Cathy Green.

During her senior year of high school, Upright’s senior project required her to spend 15 hours doing community service with a non-profit organization, and she chose the Center for the Environment since she enjoyed coming to the Environmental Summit so much.

During this time, she worked in the ecological preserve helping create cages around aesthetically important trees to deter beavers from trimming them down and engaging in other preserve maintenance projects.

These camp experiences helped Upright decide to pursue an academic major in environmental sustainability with a concentration in natural resource management and to become an Environmental Steward. Upright ultimately decided to come to Catawba because, she says, “there is no place like the Center for the Environment,” and “there’s no place like the Ecological Preserve.”

High school students with an interest in the environment and sustainability have an opportunity to have an experience like Macayla’s by applying to participate in the Seventh “Redesigning Our Future” National Environmental Summit, July 11-15, 2017.