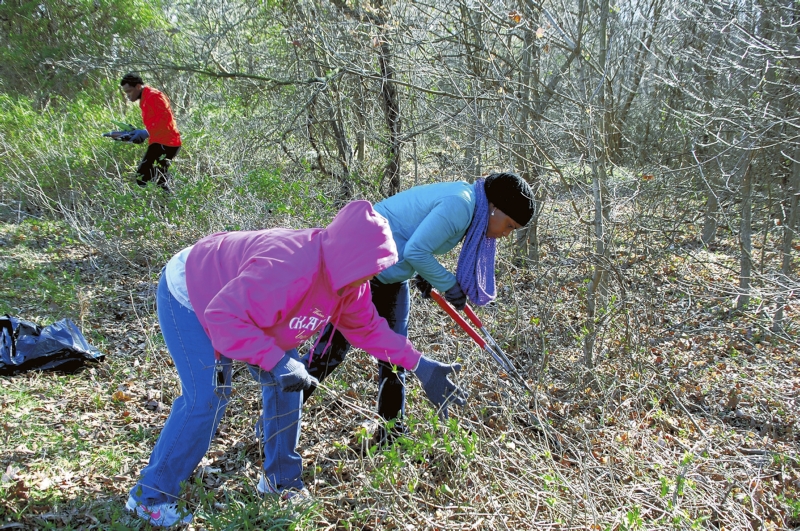 Mark Wineka/Salisbury Post While Ephraim Koonce picks up litter in the background, Julia Rustin (in the pink) and Rennetta Roberts try to clear some underbrush on the site of the future Martin Luthern King Jr. Dream Park in Salisbury.

A clean-up crew descended on the future Dr. Martin Luther King Jr. Dream Park Saturday and began the early work of trying to get the land ready for development.

The Rev. Julius Koonce, pastor of Christ Transformation Center, said Saturday’s work was like a relaunch of the project in hopes of generating community and city involvement down the road.

Koonce wanted people driving by to see that work has started on the park. As its identity becomes more established, the pastor said, larger donations for the project should follow.

“Some, I’m pretty sure, are waiting to see more progress,” Koonce said. “… I think it’s going to be a great park.”

Since a groundbreaking last February, Koonce said organizers have used the year since to establish a non-profit status for the park and separated it from his ministry.

“The whole nine yards,” Koonce said of having successfully completed that task. “We took the time to make sure that it was done right.”

Koonce was loading his Ford Ranger truck with debris and going after undergrowth and small trees with a chainsaw Saturday. His wife, Tammy, and other workers such as Julia Rustin, Renetta Roberts, Ephraim Koonce, Greg Tinsley, Tony Gillespie, Ruth Booker and Eleanor Qadirah were pitching in and were among the first arrivals for the work day.

“It’s a good workout,” Tammy Koonce said. “I don’t have to go to the gym today.”

Besides attacking the vegetation, the work crew also was picking up litter on the site. They set up a table along Martin Luther King Jr. Avenue that held cases of water to keep themselves hydrated on the warm winter day.

“We wanted to just clear it out, so people can see something going on,” Julius Koonce said. “If the community doesn’t appreciate what’s here, it will go down. I refuse to let that happen.”

A large sign along Martin Luther King Jr. Avenue marks the land where the future park is proposed. It lies on the opposite side of the road, not far from the end of Crawford Street.