Huntin’ an’ fishin’ stories could make him famous 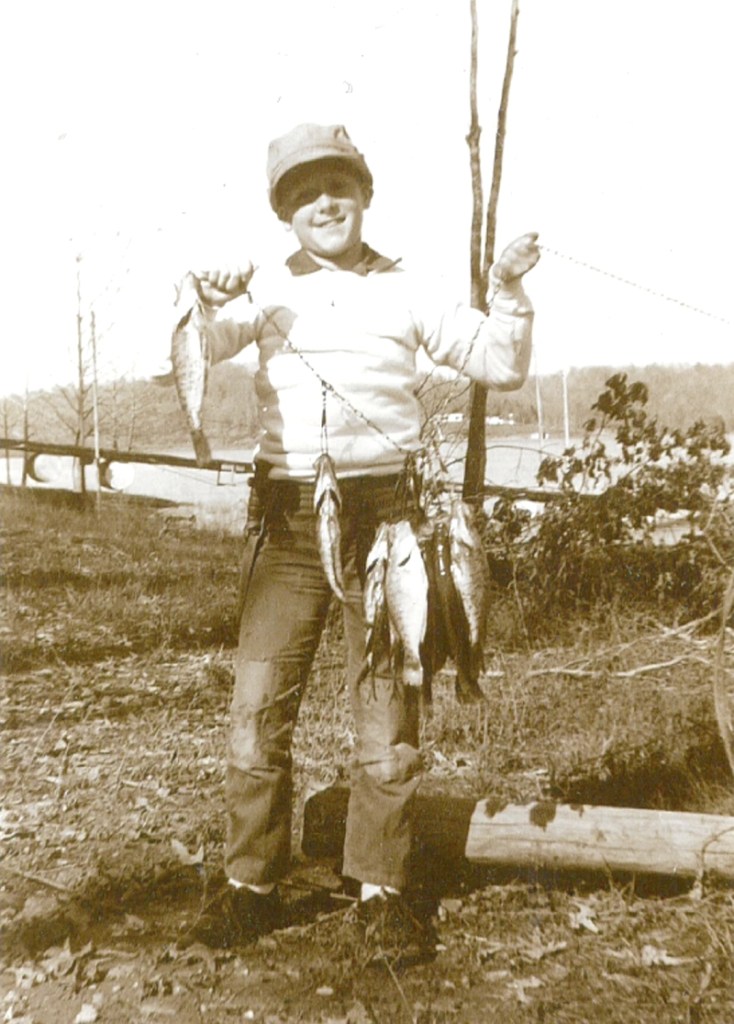 Submitted photo Mike Wilson as a child, holding a string of fish. He spent a lot of time fishing and hunting with his grandfather.

There’s a side of Dr. J. Michael Wilson that many do not know and some could not even imagine. The Catawba College professor of Spanish and chair of the department of modern foreign languages is a man who relishes all things outdoors.

He holds his best memories in his mind like hard candy in the mouth, melting the sweetness a swallow at a time.

Among Wilson’s most savored memories are those of Tennessee summers and autumn weekends he spent as a child in a cabin near the Tennessee River with his grandparents; of bass and crappies caught, cleaned and eaten; of deer hunts and duck hunts past and present; of the deer bagged and some about those Hartfords that got away.

Although this is a man whose academic specialty is the history of the imperfect subjunctive in Spanish, his real life specialty is recall. He uses his Hemingwayesque ability to capture his memories in succinct and sometimes pithy, self-deprecating word portraits.

Wilson has taken to writing stories to capture his memories and a few editors are publishing them, much to Wilson’s delight. His “It’s a Dog’s Life” appears in the February 2017 edition of North American Whitetail, and his “The Fellowship of Fowling Forefathers” will be published in the spring 2017 edition of Delta Waterfowl. But publishing wasn’t initially what Wilson intended for his stories that number more than a dozen.

“I started writing my stories mostly for family and friends and my kids loved them. Actually some of these are stories that I have told over the years at parties or gatherings, and everybody yuks it up and I just thought I would put them down on paper.

“The people involved usually like them a lot. They say, ‘Yep, that’s how it happened, but I couldn’t have told it like that.’ One of my friends read one I had emailed him and he answered, ‘Not a bit of embellishment.’ ”

Wilson’s technique for conjuring his memories into stories is simple. He uses the time when he’s hunting and waiting for something to happen to think about a story and “write it in my mind.” When he returns home, he sits down and writes the story on the computer, with most completed in an hour.

“You have a lot of free time in your mind if you’re hunting deer from 6 a.m. till noon. Most of the time, I depend on the anecdote and most of the time it’s the how not to anecdote.”

Committing his stories to digital memory, especially those about the part of his childhood spent with his Tennessee grandparents, allows his children to know their ancestors. They allow Wilson a sweet taste of his past.

Wilson grew up in the Memphis area mostly, but lived with his maternal grandparents in Jackson, Tenn., between the ages of 6 and 8 while his father worked out of state. During this time, he learned the skills of hunting and fishing, and he learned much about his grandparents.

One of his stories remembers his grandparents’ houseboat cabin in the woods on the banks of Lick Creek. Another recalls his grandmother’s courage and propensity to actively seek and destroy snakes, especially rattlesnakes, saving their rattlers as noise-making reminders of her prowess. Other stories poke fun at his own ignorance, like the time he mistook a bunch of decoys floating on the water for live, baggable fowl, or the time he was trying to help roust a deer in the direction of one of his older hunting pals only to discover his friend asleep while “the Hartford” he had roused sprang away.

When Wilson’s not remembering and writing, he is busy making more outdoor memories with his wife, friends and grandkids. He shared a recent story of taking his 8-year-old grandson on a deer hunt.

“It wasn’t a hardship hunt, but we were in Virginia on a cold November morning in a tent blind when five turkey gobblers came by. My grandson London said in a whisper, ‘Shoot them,’ but I knew that Virginia had a split season and that that day it was not legal to hunt turkeys. I hope he learned a lesson from that as well – follow the law.”

So we can have a taste of those stories and memories that Wilson holds so dear, he generously agreed to share one with a particular Rowan County flair. Entitled “You Say Catawba and I Say Catalpa,” the story tells the tale of one of his best fishing baits and what happens when the word about it gets out.