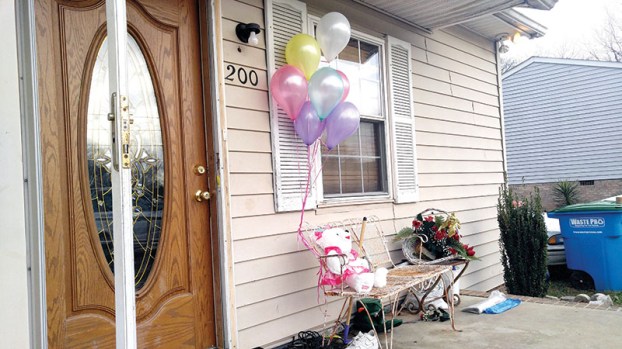 A balloon and bear were left in December on the porch of the Harrel Street home 7-year-old A'yanna Allen was shot and killed on Dec. 4. Shavonne Potts/Salisbury Post SALISBURY — An autopsy report from the office of the Chief Medical Examiner in Raleigh reveals that A’yanna Allen, killed Dec. 4 while sleeping at her grandmother’s house, suffered “20 gunshot wound injuries.”

After the girl’s death, the Salisbury Post requested the autopsy report, which was delivered by email Saturday. It paints the grim repercussions of the hail of bullets fired at the Harrel Street house of Shirley Robinson in the early morning of Dec. 4.

The 20 gunshot wounds do not mean A’yanna was struck by 20 different bullets. The autopsy documented possibly up to 13 shots, including eight perforating wound tracks, two penetrating wound tracks and three superficial or grazing wounds.

“… Many trajectories could not be determined with certainty,” the report said. It added that the complex nature of the wounds and their lack of “normal defining characteristics,” made it difficult to determine entrance vs. exit wounds.

But the autopsy concluded the little girl, a second-grader at Koontz Elementary School, had gunshot wounds to her toes, legs, abdomen, back, head and chest. In addition, she had fractures of the skull, ribs, pelvis and right femur, according to the report.

A single bullet was removed from her lower left leg, and fragments of bullets were recovered from the girl’s right thigh.

The cause of death was officially given as “multiple gunshot wounds,” and is classified as a homicide.

The autopsy was conducted Dec. 5, but the report wasn’t completed until Feb. 3.

A’yanna was pronounced dead at the scene the morning of the shooting. Robinson, her grandmother, was treated at the hospital that same morning for a gunshot wound to her leg.

A’yanna’s case remains unsolved. A reward of $20,000 has been offered for information leading to an arrest. Police have said the shooting into the house on Harrel Street and one that happened just hours earlier that same morning in the parking lot of the Firewater restaurant are connected.

The Firewater shooting resulted in the death of Sharod R. Mathis, 22.

A Heal the Community event was held Friday night at Bounce City on North Church Street to remember the names of the victims of unsolved murders. At that event, April Woodberry, A’yanna’s maternal grandmother, said the family had received the results of the autopsy earlier in the week, and she noted the 20 gunshot wounds.

‘Are there any old toys around here?’ You’d better believe it

By Mark Wineka mark.wineka@salisburypost.com SPENCER — Four years ago, in what he says was his attempt not to be a hoarder, Steve... read more