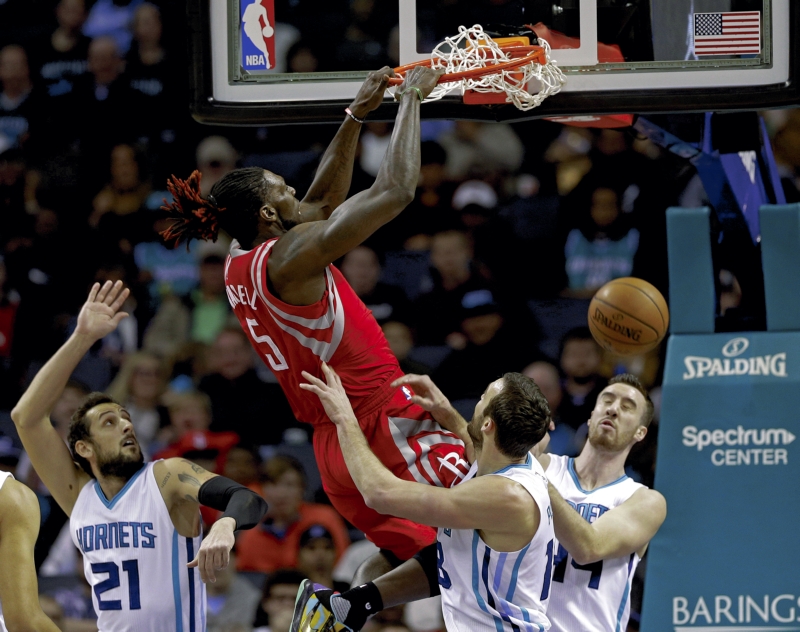 Montrezl Harrell won’t be dunking on the Hornets any longer now that he’s joined them. (AP File Photo/Chuck Burton)

CHARLOTTE (AP) — James Harden had 30 points, 11 rebounds and eight assists, and the Houston Rockets beat the Charlotte Hornets 107-95 on Thursday night for their third straight win.

It was the 25th time Harden has scored at least 30 points.

Harden was just 8 of 21 from the field and had nine turnovers, but turned up his play a notch down the stretch as the Rockets overcame a nine-point, third-quarter deficit.

The Rockets forced the Hornets into a season-high 22 turnovers, leading to 27 points.

Nic Batum had 15 points and 10 assists for the Hornets, who have lost eight of their last nine.

But the game got away in the third quarter after a series of miscues, including two bad passes by Batum.

The Rockets took command with Harden scoring 14 points in the quarter.

Beverly made a double-digit game with less than 3 minutes to play and sent fans streaming to the exits when he knocked down a jumper in the corner over Kemba Walker then stared down the Hornets All-Star point guard and put his hand over his face as he retreated down the floor. The Hornets never challenged after that.

Rockets: Eric Gordon (back soreness) and Nene (shoulder) did not play for the Rockets. “He’s got a shoulder issue that he’s got to take care of,” Rockets coach Mike D’Antoni said. “It’s not bad.” … Clint Capela has his 30th game with 10-plus points this season, scoring 11 points.

Hornets: Cody Zeller returned to the starting lineup after missing seven games with a quad contusion.  However, Zeller left the game in the second half with soreness in the quad, finishing with nine points and four rebounds.

Hornets: Host the Clippers on Saturday.