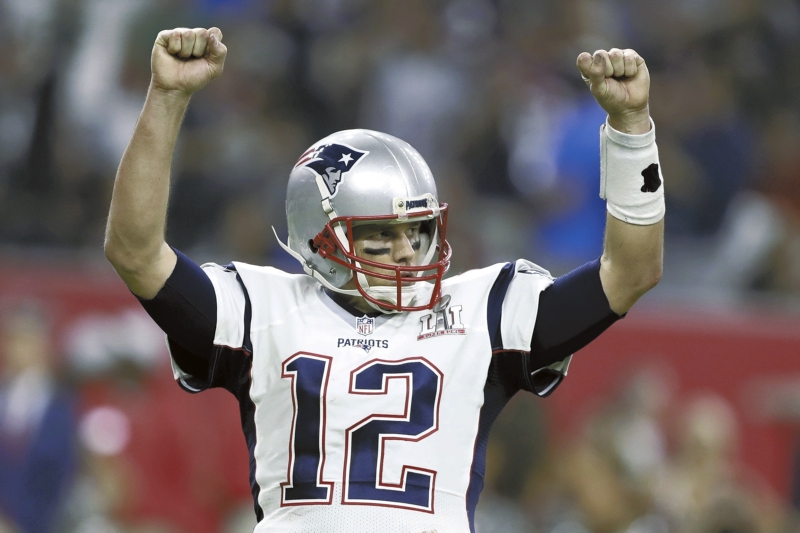 New England Patriots' Tom Brady reacts after a two-point conversion, during the second half of the NFL Super Bowl 51 football game against the Atlanta Falcons, Sunday, Feb. 5, 2017, in Houston. (AP Photo/Darron Cummings)

HOUSTON (AP) — Tom Brady and his missing jersey have still not been reunited.

The investigation, which is being led by the Houston police department’s Major Offenders division, has so far not turned up any leads on who swiped the jersey, Houston Police Executive Assistant Chief George Buenik said Tuesday.

The Texas Rangers, the state’s top law enforcement officers, are assisting in the investigation along with the NFL’s security department.

Brady’s jersey was taken from the New England Patriots’ locker room at Houston’s NRG Stadium after the team’s 34-28 victory over Atlanta in the Super Bowl on Sunday.

Buenik said officials are aware the jersey is considered valuable.

“So we are deeming this a pretty important case,” Buenik said at a news conference held the same day the Patriots were celebrating their win with a Boston parade. “We want our top investigators on this case and hopefully we’ll make an arrest and more importantly recover that jersey for Tom Brady.”

Buenik said investigators are working to identify who was in the locker room at the time the jersey was taken. Police are also trying to determine who had access to the locker room but that could be a long list as players, all the coaches, team support staff and members of the media all had access, he said.

While a Houston police officer was stationed outside the locker room, access to the location was controlled by New England Patriots team security, Buenik said.

“We’re attempting to gather a list of people who were in that locker room at that point so we can interview them,” he said.

Investigators are also working to obtain video, including from some news cameramen, that might have caught the crime on tape.

“We are asking all the cameramen to check your video to see if they may have captured something,” Buenik said. “Police investigators maybe contacting you so we can look to see in an attempt to identify everybody in that locker room at the time.”

Crime Stoppers of Houston will also be offering a reward for any information leading to the stolen jersey and to the arrest of the person who took it, Buenik said.

When asked about the need for police to get involved in the search for a missing jersey, Buenik said, “Our Major Offenders squad deals with all kinds of specialty cases.”

“Texas Rangers offered their assistance along with NFL security, private security at (the stadium),” he said.

Brady has joked that he expects to see the jersey soon in an online auction.