The Norvell transforms into the Globe Theater next weekend 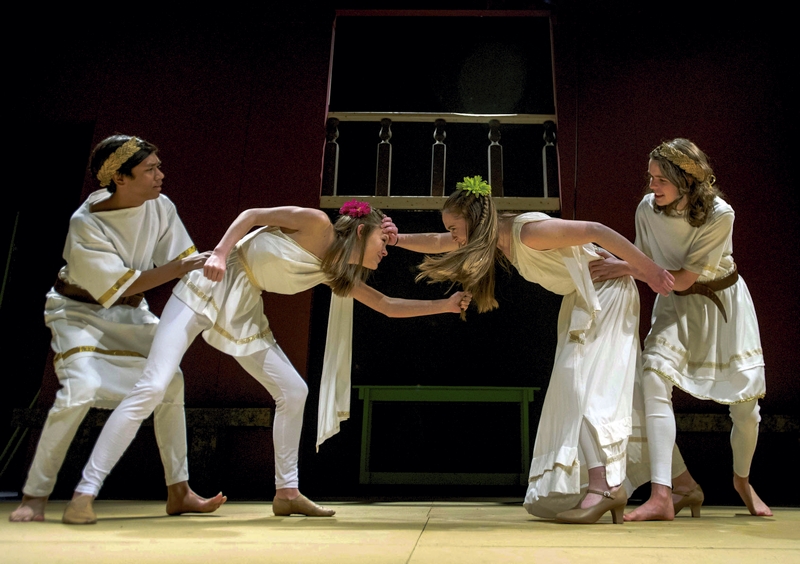 “A Midsummer Night’s Dream,” William Shakespeare’s most popular comedy, opens at the Norvell Theater next Friday. Director Reid Leonard has designed a truly unique set that will make the Norvell Theater almost unrecognizable. At the base of Shakespeare’s Globe Theater stage in England, there was an area called the pit, where audience members called the “groundlings,” would stand on the floor to watch the performance. For Piedmont Players Theatre’s production of “A Midsummer Night’s Dream,” the audience will experience what it would have been like to see a play at the Globe in Shakespeare’s day.

The play deals with the universal theme of love and its complications: featuring three interlocking plots, connected by a celebration of the wedding of Theseus, Duke of Athens and the Amazonian queen Hippolyta.

When Hermia refuses to comply with her father Egeus’s wish for her to marry his chosen man, Demetrius, she is advised by Duke Theseus that the law requires a daughter to marry the suitor chosen by her father, or else face death or lifelong chastity as a nun. Hermia and her real love, Lysander, therefore decide to elope and run away into the forest.

As it turns out, Hermia’s best friend Helena is in love with Demetrius, so she decides to tell him of the plan in hopes that it will make Demetrius like her more. The moment Demetrius learns of the elopement plan, he chases the couple into the forest with Helena chasing him in turn.

Meanwhile, Oberon, king of the fairies, and his queen Titania arrive in the same forest, fighting over which of them has the right to one of Titania’s servants. When the queen refuses to relinquish the boy, Oberon recruits the mischievous fairy Puck to help him by applying a magical juice from a flower, which makes the victim fall in love with the first living thing they see when they wake up.

Things get crazy when Oberon encounters the four Athenian lovers and tells Puck to use the magic to aid their love lives as well. When Puck puts the magic potion on the wrong guy, forcing him to fall in love with the wrong girl, the couples are enveloped in a fog of Puck’s errors and a maze of romantic entanglements.

Meanwhile, in the very same forest, a group of amateur actors are rehearsing a play they hope to perform at the Duke’s wedding. As if things are crazy enough, Puck decides to play a joke on an actor named Bottom, turning his head into the head of a donkey. The prank backfires when the queen wakes up, sees Bottom and immediately falls in love with an actor with the head of a donkey.

“A Midsummer Night’s Dream” is widely performed around the world, and no wonder — it’s about the world’s most popular pastime, falling in love. But as Puck will learn, falling in love can make fools of us all. Love is crazy, love is mad. Will love win out in the end?