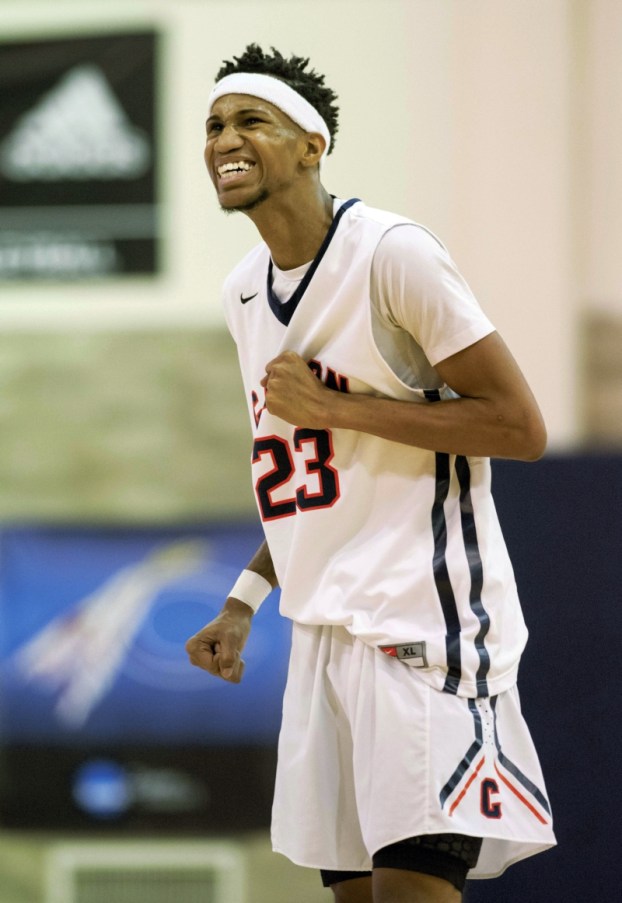 A long, lean, 6-foot-4 scoring machine who was introduced as “The Walking Bucket” when lineups were announced, Hairston got those 24 and then some in Carson’s 86-82 overtime victory against Hickory Ridge. His 31-point night included the game-tying free throws at the end of regulation. His game-tying jumper in overtime gave him 1,001 for his career, and then he drilled a pair of 3-pointers that won the game for the Cougars.

“We didn’t finish some games last week,” Hairston said. “We were going to finish this one.”

It was Carson that looked finished when Hickory Ridge’s Nick Ruggerio whipped a long pass to Jarrett Garner for the layup that gave the visiting Ragin’ Bulls (16-6, 13-4 SPC) a 13-point lead midway through the third quarter. It was Carson’s Senior Night, but the Cougars were struggling. They weren’t shooting straight or defending with passion.

“The thing is if we can just continue to fight and hang around, then we can get right back in a game with a few 3-pointers,” Carson coach Brian Perry said.

That’s what happened. In a four-minute span, Owen White (18 points) buried three 3-pointers for the Cougars, and the Cougars were back within 54-50 by the end of the third quarter.

“The 3-point shot can change the landscape of a game quickly,” Hickory Ridge coach Robert Machado said. “We just didn’t play very good defense. We didn’t protect the rim. It wasn’t just their 3-pointers. Carson got a lot of layups.”

Carson (14-8, 11-6 SPC) slid behind by seven points with four minutes left, but Hairston was getting to the foul line repeatedly, and senior Brenden Westbrook was soaring to the rim.

With Carson down four in the final minute, Westbrook made a clutch shot in the lane to get the Cougars within two. Then Westbrook was able to find Hairston in heavy traffic in the final hectic seconds of regulation. Hairston was fouled on a 15-footer with less than a second left. There was a lot of contact and not much doubt about the call. He calmly made the free throws that forced overtime at 73 apiece, as Carson’s student section went bonkers.

Hickory led early in the OT. Hairston’s jumper for 1,000 tied it again.

Hickory Ridge guard and leading scorer Jarren Cottingham took a hard fall and had to leave the game. That hurt the Ragin’ Bulls at the end.

Still, when Darian Bell made a steal that led to a go-ahead layup and then made two slutch  throws, Hickory Ridge led 82-78 with 55 seconds left in the overtime.

Hairston’s 3-pointer from the right side that made it 82-81 was fortunate. It touched every part of the rim before dropping through the cords.

“I hadn’t hit a 3 all night,” Hairston said. “But Cam Prugh got the ball to me, and somehow that shot went down.”

Hickory Ridge turned it over, and Hairston got another look from almost the same spot. This one he buried cleanly, and Carson went up 84-82 with 10 seconds left.

“Westbrook saw me, and I don’t know how he saw me,” Hairston said. “But I made the shot. It was crazy.”

Hickory Ridge got a decent last look, a 3-pointer from the left corner, but the shot caromed high off the iron, and White, positioned firmly on the weak side, soared for the game’s biggest rebound.

Then White strolled to the line with two seconds left and made the clinching free throws.

“We looked around in the third quarter, we’re down 13, and it’s almost gotten away from us,” Perry said. “But we kept playing. If you keep playing, there’s always a chance.”

Foul-plagued Jailen Williams, Prugh and Cole Perry chipped in with a combined 25 points for the Cougars. Blake Daniels got a Senior Night start.

By Mike London mike.london@salisburypost.com CHARLOTTE — Carlos Dixon could have squeezed another year or two out of his basketball playing career, but... read more