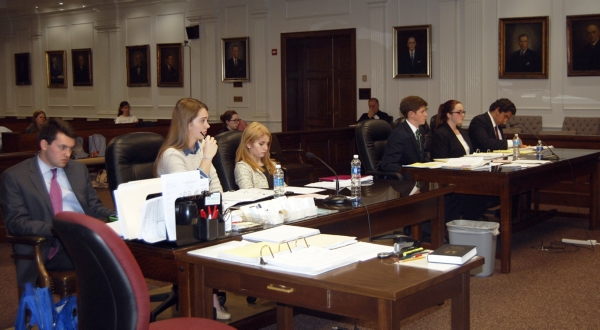 SALISBURY — Courtrooms at the Rowan County Courthouse were full of high school students arguing their cases for the North Carolina Advocates for Justice High School Mock Trial Competition on Saturday.

The Rowan County Bar Association hosted the regional competition for the first time this year.

Attorney Adrienne Blocker, from Durham, said interest has been so high for the competition that they had to create a new region.

“It’s a good problem to have,” she said.

The goal of the mock trial competition is to teach students about the judicial system and how to conduct themselves in a courtroom.

Blocker said the competition is not necessarily for students who want to be lawyers, but it helps all students with their public speaking skills.

“It doesn’t matter what you do in life, you need to know how to speak,” she said.

Blocker and Gordon Widenhouse, Carolina Center for Civic Education president and NC program founder, were at the courthouse to help with the competition. Local attorney Darrin Jordan served as the regional coordinator.

There were 10 teams of students who competed in four courtrooms and superior courtroom of the courthouse. The students received their case in September and have used their time outside of school to perfect their arguments with coaching from local attorneys.

The students went through two rounds — one as the plaintiff or the state and another as the defendant. Practicing attorneys acted as jurors and judgers, judging the students on how they presented their cases, how well they defended against objections and how well they examined and cross-examined the witnesses.

Jordan was able to assemble judges, attorneys, paralegals, the Rowan County Sheriff’s Office and others in the legal community to help with the competition, all on a volunteer basis.

“This was just a good opportunity for our local bar to do something for the community,” he said.

Blocker said students learn to think on their feet, budget their time and what it means to commit to a project.

Shy students also often find they have the confidence to speak in front of their peers, a judge and the families who sit out in the audience, something Jordan said he might not have been able to do in high school.

“These kids are incredible to do this,” he said.