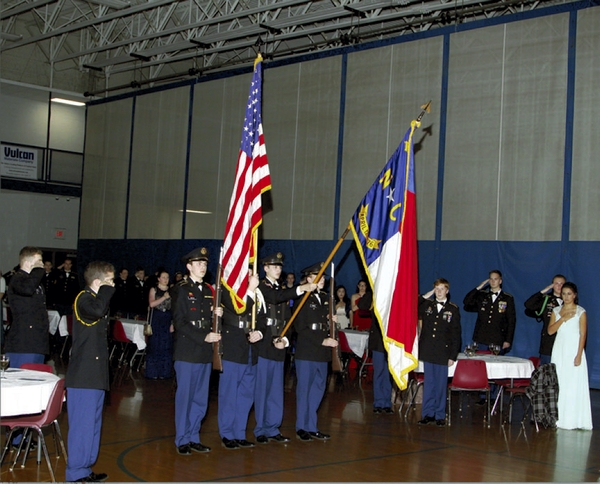 On January 21, 2016 the East Rowan JROTC Battalion had their Military Ball at the East Rowan YMCA. At 7 pm the male cadets arrived wearing the JROTC uniform and the female cadets wore formal dresses. As the cadets enter the gym they introduce themselves and their date if they had one to the receiving line. After they introduce themselves they stood by their seats as they wait for everyone to finish going through the receiving line.

The Military Ball began with opening remarks by Cadet/SGM Whaley and the posting of the Colors by the Color Guard led by Cadet/CSM Jacob Johnson. After the posting of the Colors there was a recognition of our fallen comrades with a table set out to represent them. Then the Senior Graduating Class of 2017 was recognized; each senior walked under the Honor Guard’s sabers with their date. After all the seniors had walked there was a special toast for the Commander in Chief and the military branches before dinner started. Dinner consisted of filet mignon, macaroni and cheese, mashed potatoes, rolls, and salad. The dinner was catered by Phyllis Yarbrough along with her company, Your Cup of Cake Catering. After dinner the guest speaker, William Sigmon the Battalion Commander in 2014-15, gave his speech for all of the cadets in JROTC.

Once Mr. Sigmon finished his speech, the Change of Command Ceremony began. The outgoing Fall Semester Battalion Commander Cadet/LTC Jonathan Ritchey passed the unit colors to LTC Skelly who then passed the unit colors to the future Spring Semester Battalion Commander Cadet/LTC Jamie Cruse. The award ceremony then began, where the cadets received different awards as in the good conduct award and the physical fitness award. Also members of drill, orienteering, raiders, and rifle team also received awards for their commitment to their team. Once all of the awards were passed out the Color Guard retired the Colors ending the formal part of the Military Ball. The first dance started around 9:15 and was led by Cadet/LTC Cruse and his date Alana Miller. Military Ball lasted until 11:00 that night. The Cadets then help clean up the gym. JROTC Military Ball is a great way for Cadets to see how JROTC is a family and to recognize Cadets for their achievements. This event will always be a great way for Cadets to see what JROTC is all about.

The Granite Quarry High School Class of 1948 held its 68th class reunion on Nov. 12, 2016 at the K&W cafeteria in Salisbury. After everyone arrived and greeted one another, Buddy Foster gave the invocation for lunch. Afterward there was time for remembering our school days, the good times that were had and the friends we made. Classmates that could not attend were remembered, as well as those who are no longer with us.

The date was set for next year’s reunion as the first Saturday in November, which would be the 4th, at K&W Cafeteria at 10:30 a.m. Doris Cline, Buddy Foster and Rose Holshouser will serve on the committee to remind the classmates of the time, date and place for next year’s 69th reunion.

Out of town classmates and spouses were John “Buddy” Foster and wife Treva, from Sherrills Ford; Glenn Webb and wife Martha from Stoneville. Guests were Glenn “Pud” Holshouser, Glenn Wilson and  Brenda, the daughter of Anna Mae Rickter.

Before the reunion came to an end, Buddy Foster read some interesting facts about our earlier years as we grew up. Some had to pick cotton, and others had no electric lights. The average wage was 22 cents an hour, there were 8,000 cars in the United States and only 144 miles of paved roads. The speed limit in most cities was 10 mph. “Things sure have changed!”

Princess and Her King Daddy/Daughter Dance

KANNAPOLIS — The inaugural Princess and Her King Daddy/Daughter Dance will have a regal touch to it, thanks to the Carolina Renaissance Festival’s Royal Court Dance Ensemble.

The dance is for girls ages 5 years and older to be accompanied by her father, step-father, grandfather, brother, or any another special man in her life. Tickets are $40 per couple, and each additional girl is $15. The event runs 6-8 p.m. Saturday, Feb. 11 at the Laureate Center at Kannapolis City Hall, 401 Laureate Way.

Siegel said they look to have about eight dancers at the event who will teach dances of royalty from 16th century Europe.

Alpha Kappa Alpha Sorority, Incorporated will partner with Novant Health to offer a heart health program on Friday, Feb. 10,  at the J. F. Hurley YMCA. Free screenings for BMI, blood pressure, triglycerides, cholesterol, and blood glucose finger sticks will be provided from 10 a.m. to 1 p.m. Fasting not required. A presentation by Apur Kamdar, MD, Interventional Cardiologist with Novant Health Heart and Vascular Institute will be from 1-2 p.m. To pre-register for the screenings or for more information,  contact Marva McCain at 704-640-0087 or mmccain08@bellsouth.net
Rowan Redbuds

The Rowan Redbuds Garden Club met on Thursday, January 26, at the Rowan Public Library. President Kim Fahs presided. If you are interested in visiting the club, call 704-754-8905 for more information.