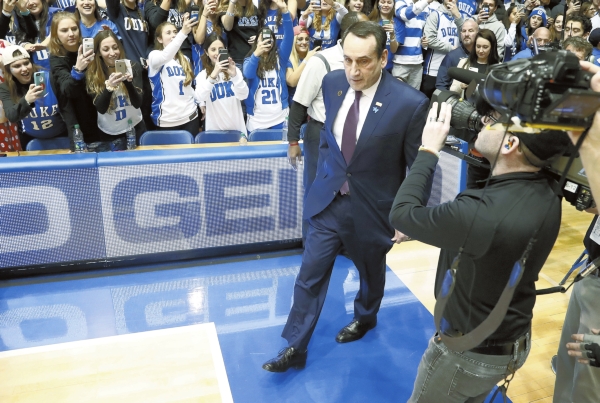 Duke head coach Mike Krzyzewski comes on to the court prior to the start of an NCAA college basketball game against Pittsburgh in Durham, N.C., Saturday, Feb. 4, 2017. (AP Photo/Karl B DeBlaker)

DURHAM (AP) — Mike Krzyzewski came out of the postgame handshake line and headed straight to midcourt, where he took a few bows of gratitude to the Duke fans and pumped his fist in the air.

After a month away, Coach K wanted the Cameron Crazies to know how badly he missed them.

“You forget how lucky you are, until something is taken away from you,” Krzyzewski said. “I’m going to be 70 years old in a week or so, and I still get this?”

The 21st-ranked Blue Devils made Krzyzewski a winner in his return to the sideline after back surgery, beating Pittsburgh 72-64 on Saturday after Grayson Allen scored 18 of his 21 points in the second half.

Michael Young scored 24 points and Jamel Artis added 17 for the Panthers (12-11, 1-9), who have lost eight straight but the ACC’s last-place team gave its preseason favorite fits all game.

Pitt had the ball down 63-59 when Artis missed a 3-pointer in transition with about 1 1/2 minutes left. Allen countered with the shot of the day — a 3 with the shot clock winding down that bounced high off the front iron, then straight through, putting Duke up by seven with 49.7 seconds remaining.

By then, Krzyzewski could finally exhale in his first game back on the bench in a month.

He underwent surgery Jan. 6 to have a fragment of a herniated disk removed from his lower back, and in announcing his return Thursday night, the winningest men’s coach in Division I history revealed that he’s been attending practice for about 1 1/2 weeks.

The Blue Devils went 4-3 with associate head coach Jeff Capel running things in the interim, winning their previous two games on the road in a span of 48 hours.

“His energy, his fight, his spark, seeing him in the huddle was big for us,” Allen said. “Coach Capel and his staff did a great job and they made sure that the program stayed up while (Krzyzewski) was gone, but having Coach back and having his face and energy on the sideline was nice.”

Nothing came easy in this one, with Pitt leading for about 8 minutes and neither team leading by more than six points until there were about 5 minutes left.

Duke: Just about all the key players are healthy again — the exception is Matt Jones, who Krzyzewski said was hurt in practice this week — and so is the Hall of Fame coach. The Blue Devils’ roster composition more closely resembles the team they were expected to be when they were picked No. 1 in the preseason Top 25.

Now they’ve got to start playing that way, and Krzyzewski says the team is better now that it was when he left because it’s developed toughness and togetherness.

Duke: The Blue Devils have a few days off before playing host to No. 12 North Carolina on Thursday night in the latest renewal of college basketball’s fiercest rivalry.

From staff sports Catawba’s baseball team split a doubleheader at Lee University on Saturday. The Indians (2-1) were held to... read more