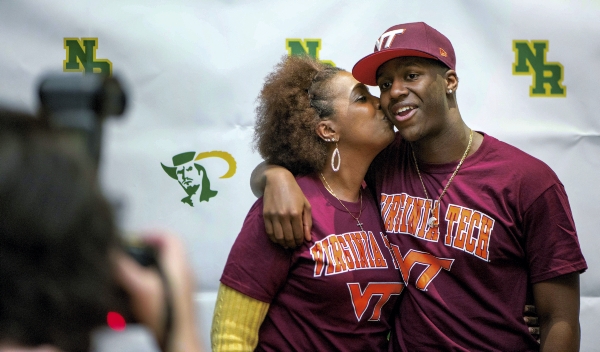 JON C. LAKEY / SALISBURY POST Jill DeBose gives her son Zion a kiss. North Rowan High school football standout Zion DeBose revealed to his family, friends and coaches were he is planning on attending college to continue his football career. On Friday with much fanfare DeBose took of his jacket to reveal a Virginia Tech t-shirt to the cheers of the crowds. Friday, February 3, 2017, in Salisbury, N.C. JON C. LAKEY / SALISBURY POST … Javon Hargrave of the Pittsburgh Steelers (left), and Chris Smith of the Jacksonville Jaguars (right), flank Zion DeBose. North Rowan High school football standout Zion DeBose revealed to his family, friends and coaches were he is planning on attending college to continue his football career. On Friday with much fanfare DeBose took of his jacket to reveal a Virginia Tech t-shirt to the cheers of the crowds. Friday, February 3, 2017, in Salisbury, N.C.

DeBose broke into the “Happy Birthday” song, with the backup help of a few hundred folks gathered in the North Rowan High auditorium on Friday afternoon. His mother, Jill, was celebrating a birthday, and that occasion explained why DeBose announced his signing with Virginia Tech two days later than the rest of the nation’s most coveted recruits.

DeBose (6-foot-3, 230 pounds) had to take care of his mom before he took care of the Hokies, who were the victors in a Final Four that also included Pittsburgh, Illinois and Missouri.

“Back in October, my mom came to me and told me that no matter how big or small the school I signed with was, she wanted me to do it on her birthday,” DeBose said. “All the family was here. We wanted to do this as a family, before I go off to school and only get home a few times a year.”

The  delay in DeBose’s announcement heightened the suspense. So did the unusual amount of effort that went into this signing production.

North athletes generally sign with colleges in the school’s media center, but the auditorium was needed for DeBose in order to accommodate the North band,  dancers and cheerleaders, as well as teammates, coaches and an unusual number of interested supporters and onlookers.

Faces in the crowd, included two NFL players — Pittsburgh Steeler Javon Hargrave (North Rowan) and Jacksonville Jaguar Chris Smith (West Rowan). Both have worked with DeBose, and all three were tutored by Steve Williams, the former Catawba College star who has been an assistant coach and defensive coordinator at a number of area high schools. That explains why DeBose already has the technique to match his enormous physical gifts.

“DeBose can be really good at Virginia Tech, and hopefully we’ll see him in the NFL,” Hargrave said. “He has that same crazy get-off that I had and he’s dominated his competition the same way that I did. The only difference is he had a lot more colleges recruiting him than I did.”

Besides his four finalists, DeBose had offers from North Carolina, N.C. State, Duke, East Carolina, Kansas, Purdue, Cincinnati, Charlotte and Appalachian State. He verbally committed to Appalachian State in July, but the Missouri offer pleasantly surprised him and expanded his horizons. He announced a de-commitment from ASU in October, and there seemed to be a new offer every week after that.

He made his first official visit to Missouri in December, then took visits to Illinois, Pittsburgh and Virginia Tech, in that order, in January.

“It was a tough decision,” DeBose said. “It came down to those four because they have great architectural or engineering programs and they have great coaching staffs. Virginia Tech is the closest of the four to home, but that wasn’t a big factor in my decision. I was prepared to go anywhere, but it was Blacksburg that felt right. Virginia Tech has had a lot of success,  a lot of bowl games, and the defensive coordinator, Bud Foster, is a genius. He’s been doing it for 31 years.”

There were a lot of speakers at this unique signing day, reminding  folks of how far DeBose has come.

His parents, Jill, a teacher, and Lorenzo, a counselor and psychologist, aren’t originally from North Carolina. Jill , from Philadelphia, and Lorenzo, from Texas, met in Salisbury when they were students at Livingstone College. Jill wanted a Biblical name for their first son, and the choice was distinctive —  Zion Paul.

DeBose was a pretty good football player as a youngster, but he was a chunky offensive lineman.

By his freshman year at North, he’d gotten taller and more athletic. He was a jayvee most of that season, but there was a week when the jayvee team didn’t have a game, so DeBose got a shot with the varsity.

“We’re playing Lexington,” said Williams, who was North’s defensive coordinator then. “Zion had been telling me for weeks he was ready for varsity, and we put him in there. Lexington had a good lineman, and he whipped Zion three straight plays. He smashed his face in. So Zion comes off the field and he knows he’s not ready, but that’s the night that it really started for him. That’s when he started doing the weekend work, doing all of the extra work and asking for more. That’s when he started becoming the player that he is today.”

By his sophomore year, DeBose was a varsity starter on a 10-3 Central Carolina Conference champ, making an impact as a pass-rusher.

Between his sophomore and junior seasons, he climbed onto the radar for a lot of colleges when he was named camp MVP at  the National Underclassmen Combine Ultimate 100 football camp in Georgia.

He was devastating his last two seasons for North and twice was named CCC Defensive Player of the Year. He grew as a run-stuffer as a junior. As as senior, he destroyed runs and pressured passers with equal efficiency.

As a senior, Debose had 20 sacks, 41 QB hurries, three forced  fumbles, four fumble recoveries and two blocked punts. He was rated as the No. 2 defensive end in North Carolina, and ESPN ranks him the No. 14 overall player in the state. DeBose shared Rowan County Defensive Player of the Year honors with West Rowan linebacker L.J. Robinson, one of the nation’s leading tacklers.

“We expected really big things from Zion and he delivered them,” North  head coach Ben Hampton said. “He played at a high level consistently as a senior. With his size, with his wingspan, with the get-off that he has, he’s basically unblockable. He’s got big dreams and he’s good enough to achieve them.”

DeBose is talented, uncommonly quick for someone his size, but he also has the work ethic, the intelligence and the intangibles to do big things in college.

DeBose understands that Virginia Tech and the ACC will offer new challenges, greater challenges than anything he’s faced to this point. But he’s looking to learn and looking to grow.

“I know I’ve got to turn it up a notch and maybe two notches,” DeBose said. “As far as playing time, no one’s made any promises other than that I’m going to have the opportunity to earn playing time as a true freshman. That opportunity is all I can ask for. I plan to bust my butt working to get better.”

DeBose made it look easy his last two seasons at North, but what he accomplished required serious effort.

All that sweat added up to quite a birthday present for Jill DeBose.

Illinois, Missouri and Pittsburgh baseball caps sat forlornly on the podium as the party continued for 30 minutes after DeBose’s announcement.

DeBose, a maroon VT cap on his head and a matching shirt stretched across his wide shoulders, thanked everyone in sight, posed for pictures, and looked more than prepared for the next step on his football journey.

College basketball: Morrison getting it done on and off the court

By Mike London mike.london@salisburypost.com SALISBURY — Catawba junior Jerrin Morrison is a little different, on the basketball court and off.... read more