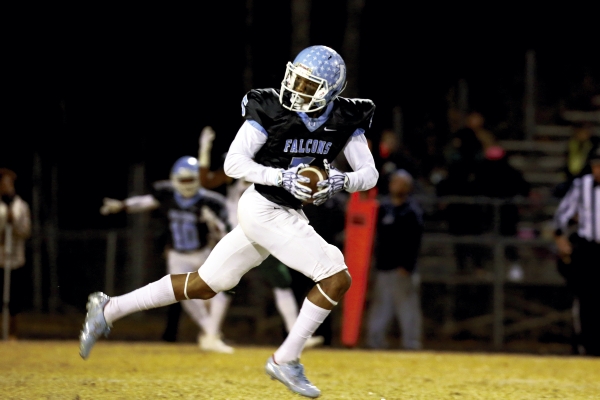 James Sipes/for the Salisbury Post ... West Rowan receiver Kortez Weeks (5) looks back towards the line and takes off for an 80-yard touchdown against Crest High School on Nov. 25. West went on to win the 3A playoff game, 35-7. Weeks signed Wednesday with Elon. Submitted photo …
Kortez Weeks, second from right, announced his decision to continue his education and football career at Elon University, yesterday at West Rowan High School. Weeks is flanked by his family.

MOUNT ULLA —  It was a whirlwind courtship.

Elon’s new coaching staff swept through and landed West Rowan’s Kortez Weeks, a Shrine Bowler and one of the most accomplished receivers in Rowan County history.

Give Concord Jay M. Robinson head football coach Joe Glass an assist. Elon coaches were visiting Robinson when Glass told them that they needed to check out Weeks. After watching film of the West Rowan-Robinson game — Weeks had 10 catches for 141 yards and two touchdowns in a 21-19 West victory — Elon coaches were trying to find the quickest way to get through the countryside to Mount Ulla.

“Elon was one of the schools at the top of my list as far as where I wanted to go for a long time, but they’d never given me any kind of offer,” Weeks said. “But then they hired a new coach (Curt Cignetti was announced as the new head  man on Dec. 31), and things happened very fast. They came to West to see me last Thursday and made an offer the same day.”

After a weekend visit  to the campus, Weeks was sold on Elon and ready to sign.

“Loved the school. loved the facilities, loved everything about it, really,” Weeks said. “And it felt right.”

There are a whole lot of  reasons for Weeks to go to Elon, which is only an hour up Interstate 85 from Salisbury. Academically, Elon has a fine reputation, and Weeks is a serious student looking for a masters degree.

“They told me they needed a playmaker, and I want to be that for them,” Weeks said.

Weeks, currently a member of West’s basketball team, played quarterback the first two game of the 2016 season, and things did not go smoothly. But putting Weeks back at wide receiver, where he had played as a sophomore and junior, and giving sophomore Payne Stolsworth a chance at quarterback, energized West’s offense. Weeks produced an epic season in 12 games as a wideout — 67 catches, 1,307 yards, 19 TDs. He was the Rowan County Offensive Player of the Year, so dominant that he was the first receiver to win that award since 1997. He also was the South Piedmont Conference Offensive Co-Player of the Year in a league loaded with stud quarterbacks and running backs.

“He’s a great athlete, but it’s his work ethic more than anything that makes him special,” West head coach Joe Nixon said. “It would be 95 degrees this summer, and I’d look out at the field, and there would be one kid out there working — Kortez. He’s kept great focus on his career goals, and he’s deserving of everything good that’s happening for him.”

Weeks’ ultimate goal is the NFL, as is the case with just about anyone good enough to be recruited by a Division I school, but he also has goals for when his playing days are done. He’d like to be a college receivers coach, maybe even an offensive coordinator or head coach some day.

Weeks had committed to Campbell before Elon suddenly swooped in. UNC liked Weeks but only enough to offer a preferred walk-on spot. North Carolina A&T was another frontrunner for his signature.

The only negative with Weeks at this point is that he’s undersized, but  he actually appears to be a little taller than 6 feet, the height at which Elon lists him. He certainly appears lighter than the 180 he’s listed at by Elon, but more pounds and more muscle are going to come with maturity and college weightlifting sessions. He’s  about 170 pounds now.

“He’s  a  little light,” West Rowan assistant Charlie Gray said. “But he’s a kid that’s going to  still look good and still be fast when he gets up to 190 or 195 pounds. And he’s got athletic, play-making ability that puts him right up there with anyone.”

Weeks made catches that high school kids just don’t normally make this season, and he did it just about every Friday. He made soaring catches, diving catches, double-teamed catches and triple-teamed catches. He didn’t drop many, and he was a threat to sprint 80 yards every time he snagged a 10-yard pass. He stretches defenses and he commands a lot of defensive attention, so he helps every facet of an offense.

Weeks is excited that Cignetti, a former University of Indiana at Pennsylvania head coach who was on championship staffs at Alabama, prior to this days in Pennsylvania, has worked with athletes such as Atlanta Falcons star Julio Jones. But Weeks is even more excited that Elon is putting a lot of faith in him and his abilities.

“My thinking has always been that when you want something you have to try and go get it,” Weeks said. “I want to excel at Elon and I’m going to work hard every day for  them.”

Nixon has experienced a lot of signing days, but they never fail to give him a warm glow of satisfaction.

“Kortez isn’t just a standout football player, he’s a standout student and a standout person,” Nixon said. “I couldn’t be any prouder. I hope he makes as many catches for Elon as he did for West Rowan.”