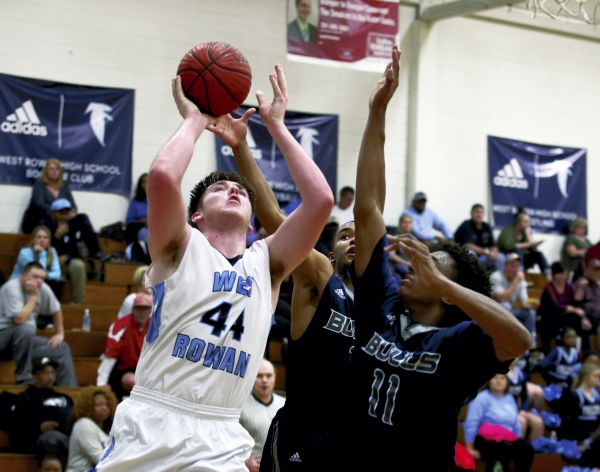 James Sipes/for the Salisbury Post West Rowan's Caleb Mauldin gets double-teamed and fouled, scores the basket and hit a foul shot to complete the three-point play. Mauldin scored 31 points and grabbed 18 rebounds in the loss to Hickory Ridge.

MOUNT ULLA — The West Rowan boys brushed aside a rough first half and put themselves in a position to win a crucial South Piedmont Conference contest Wednesday night on their home court.

But Hickory Ridge made all the clutch plays in the final minute to rally for a dramatic, 74-72 win.

Junior Guard Eli Cupples drained a pair of free throws with 0.2 left to play to secure the win and put the visitors in a tie for second place in the SPC. The free throws capped an improbable 7-1 run by the Bulls (15-5. 12-3 SPC)  in the final 50 seconds.

“I have never, ever done that in a game,” Cupples said of his clutch winning shots. “It was my first. I was thinking I just have to hit these just like in practice  but I was really shaking after I did it.”

The Falcons (14-6, 10-4 SPC) were plagued by turnovers in the first half, falling behind by as many as 12 points before closing within eight at the half.  Guard Martavio Rankin joined forces with dominant center Caleb Mauldin in the second half to not only get the home team back in the game, but put the Falcons in a position to win.

Rankin hit two 3-pointers and a pair of fast break layups to give West its first lead (46-45) at 4:05 of the third quarter. Mauldin was unstoppable for yet another game as he notched 31 points and grabbed 18 rebounds, to keep the pressure on.

In a nip-and-tuck battle down the stretch, Mauldin dunked on a fast break then hit a pair of free throws with :55 seconds left to play to give West a 71-67 lead.

Then it all fell apart.

Senior Jerrin Cottingham, who led his team with 26 points, drained a 3-ball from the corner to cut the margin to 71-70. On the ensuing in-bound play, West mishandled it and Cottingham made the steal and layup to give the Bulls a 72-71 lead at the 38-second mark.

West Rowan miss a couple of inside shots, but Rankin went to the line at 5.1 seconds and hit the first free throw. The second shot was off the mark and Cottingham raced the other way with the rebound. He dished at the last second to Cupples who was fouled with 0.2 left on the clock. The 6-0 junior calmly sank both to secure the win.

“I thought my guys showed a lot of resilience  and played really good defense down the stretch,” said winning coach Robert Machado. “Jarren made a fantastic pass at the end there to Cupples and we were lucky to get that foul call in their home gym.”

West coach Mike Gurley was pleased with his team despite the tough loss. “Effort-wise, desire-wise and Falcon-wise, I have no complaints,” he said. “We just have to execute better.”

Gurley noted his team gave up about 19 points off turnovers in the first half and told his team if they would make four or fewer turnovers in the second half they would win. “I think we only made three in the second half, but the problem was they all came in the final minutes,” he said. “Sure we wanted the “W” tonight, but I think we got our rhythm back.”

Despite the loss, West is still in the hunt for a league title, two games back of Cox Mill and one back of Hickory Ridge and J.M. Robinson. But the Falcons have to play all three of the top teams in the final days of the regular season next week.

MOUNT ULLA — A year ago at this time, West Rowan’s girls were well on their way to a perfect 18-0 record in the South Piedmont Conference, including three close wins against Hickory Ridge.

But this season firmly belongs to the Lady Bulls, who are undefeated and firmly in control of the league regular season race. Hickory Ridge showed why Wednesday night at West with an overpowering performance in the second half to thump West, 87-62.

The Falcons (12-8, 7-7 SPC) kept the game reasonably close in the first half by attacking inside with freshman center Abigail Wilson and forward Egypt Alexander, drawing a rash of fouls. West got to within three points in the second quarter before the Bulls stretched their lead to 44-32 at the half.

But the Bulls (20-0, 15-0 SPC) erased all doubt in a 29-point third quarter behind junior forward Gabby Smith and sharpshooting guard Jiera Shears (27 points), to expand the margin to 70-43.  West could get no closer than the final 15-point margin the rest of the way.

“We just weren’t happy with the way things went in the first half,” said winning coach Tolonda Simmons. “We weren’t moving our feet on defense and we picked up a lot of fouls (17). It made me feel good how we responded in the second half. We have kids who really play off each other and make things happen.”

The winners were led by Shears who scored 18 of her 26 points in the first half. Nia Daniels added 16 and Smith, a 6-1 junior power forward scored 13. At 3:35 of the third quarter Smith’s lay-up gave her 1,000 points for her career, bringing about a brief stoppage of play to present her a bouquet and a game ball.

West’s inside game produce a solid 20 points and 11 rebounds from Wilson with Alexander scoring 16 and Mary Sobataka adding 12, including a pair of 3-pointers. “It was pretty tough in there tonight,” Wilson said. “but Coach (Ashley Poole) told us to go in strong and play to our strength. The guards kept giving it to us and we tried to score as much as we could.”