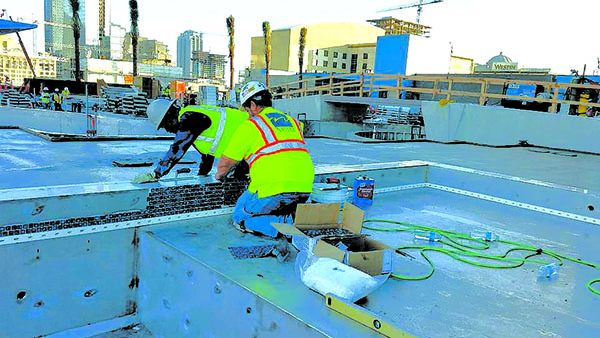 Photo courtesy of Dan Guertin Salisbury's Dan Guertin, foreground, spent seven weeks this past summer laying tile for the lazy river, steps and spa connected with the Texas-shaped pool at the Marriott Marquis Houston, which is a hub of Super Bowl activity this week.

SALISBURY — Those seven weeks last August and September in Houston proved to be hotter than anything Dan Guertin could have imagined.

Every day, he was six floors up and in the hot Texas sun, laying tile for the lazy river pool designed in the shape of  the Lone Star State. Guertin was part of a hectic construction force of close to 900 men and women trying to complete the $360 million Marriott Marquis Houston in time for this week’s Super Bowl.

The impressive hotel, one of only seven Marriott Marquis establishments in the world, opened by late December and this week is the headquarters hotel for the National Football League.

NFL Commissioner Roger Goodell has the Presidential Suite on the 28th floor.

Rooms go for about $300 a night. The hotel has 29 floors, 1,000 rooms, 40 suites and six restaurants, including a two-story sports bar named Biggio in connection to Hall of Fame baseball player Craig Biggio, who played his whole career (1988-2007) with the Houston Astros.

The huge lobby is filled with chandeliers, which have 60 tons of crystal in them. The Grand Ballroom is 39,000 square feet, and the hotel overall has 150,000 square feet of meeting space in 52 event rooms.

But the conversation point for the Marriott Marquis most often turns to its Texas-shaped lazy river pool, especially at night when the lights make it even more iconic.

To beat the heat, Guertin started laying his blue tile in the stainless steel pool at 6 a.m. daily. Until about lunchtime, the sun stayed behind the stories rising above him, but Guertin felt as though he were in a stainless steel-frying pan once the sun cleared the skyscraper and bore down on the construction site.

“You don’t want to be standing in that,” he says.

Guertin was usually finished by 3:30 p.m. each day because the heat became too much.

The lazy river pool, if straightened out, would be 510 feet long. It holds 140,000 gallons of water, and the slow current carries people around the perimeter of its Texas design in about 15 minutes.

Two bridges span the lazy river, which is 3.6 feet deep. The platforms of the bridges are clear so the outline of Texas, as seen from the floors above, is not disrupted. Room rates are based on whether they have a lazy river view of Texas below them.

Guertin says a clear glass panel at one end of the lazy river allows guests to look down six stories to the world below.

From his seven-week perch on the pool level, Guertin said he had a view of most of Houston. He could see the Toyota Center, where the Houston Rockets play; Minute Maid Park, where the Astros play; BBVA Compass Stadium, where the Houston Dynamo soccer team plays; Rice University; and Discovery Green Park.

The Marriott Marquis has a sky bridge to the George R. Brown Convention Center across the street. And Discovery Green Park, which is next door, is a 12-acre urban park that is home to a free nine-day festival full of Super Bowl activities.

As for the job he faced, Guertin says it certainly represented the biggest tile job he has done on a stainless  steel pool. “I was impressed by it,” he says.

But when you get down to it, Guertin adds quickly, you still have to lay tile one foot at a time.

Guertin learned to install tile on stainless steel through his work for Paddock Equipment Co. of Rock Hill, S.C. Natare Corp. of Indiana built and installed the stainless steel pools (including a rooftop infinity pool) for the Marriott Marquis Houston, and Natare was working for Progressive Commercial Aquatics of Texas.

Marty Few, the project superintendent for Natare, called on Guertin and his skills when the hotel’s construction was lagging behind schedule and the manpower had to be doubled and maybe tripled.

Guertin has known Few for more than 20 years, so he drove his rickety truck — “rickety” because it required $5,000 worth of motor work last year — all the way to Texas when Few called.

Guertin considers the Marriott Marquis job a once in a lifetime experience.

“I was in the right place at the right time,” he says. “… I was very fortunate to be a part of it. I love Texas. I thought Texas was great.”

Besides tiling the blue band around the lazy river pool, Guertin also tiled the spa and steps leading into the pool.

Guertin, who will soon be 60, has been laying tile for about 35 years. He started out as a distributor but gravitated toward a career as an installer. A native of Connecticut, he moved to North Carolina in 1993 after having formed his own business, Ceramic Tile Installations, in the 1980s.

“It was a great gig until 2008,” Guertin says, recalling the commercial and residential construction downturn that came with the recession. “It seems to be coming back a little now.”

Guertin had to reinvent himself and his business after 2008, but pool work through the company in South Carolina helped out.

In Salisbury, Guertin raised three boys, all of whom are grown now. Jeff is a police officer; Daniel, a college administrator; and Nick, a teacher.

Guertin says he anticipated losing a lot of weight on the Texas job, but Few ruined those plans. Guertin found himself eating regularly with Few, a good chef.

“He cooked marvelous meals,” said Guertin, who ended up putting on a few pounds in Texas.

One of the highlights of Guertin’s stay in Houston was having the chance to meet Ira Mitzner and his family. Mitzner heads RIDA Development, the company that built the hotel, and he is son of founder David Mitzner,

Jewish and a native of Poland, Mitzner spent eight years in a Soviet concentration camp before being freed and making his way to the United States with $17 in his pocket.

Mitzner, who stood only 4 feet, 10 inches, built a personal fortune, first through hosiery, then through real estate development. He died last September at the age of 101.

Many things outside football lead up to this Sunday’s Super Bowl LI between the New England Patriots and Atlanta Falcons. Guertin thinks there’s a good chance television viewers will catch glimpses of the Marriott Marquis Houston and probably the Texas-shaped pool.

If you do, appreciate the tile.