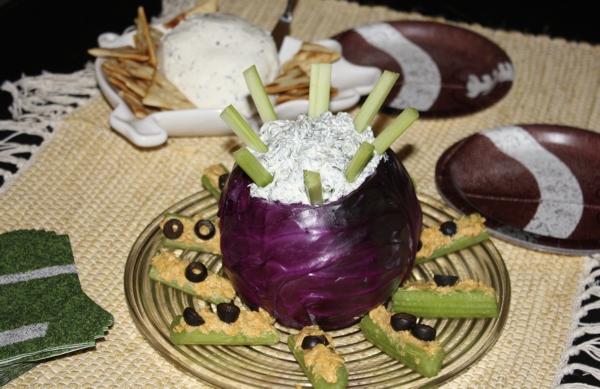 For Super Bowl LI (that’s 51 incase you do not remember your Roman numerals), let’s go retro on our snacks.

Let’s revive some old favorites and at least mix it up a little.

Yep, you can have all the chicken wings you want. These little appetizers don’t take long to whip up and they are full of flavor.

This year, it’s the New England Patriots vs. the Atlanta Falcons at the NRG Stadium in Houston on Sunday. Although there will be broadcasts all over television all day, it officially kicks off at 6:30 p.m. Lady Gaga will be the halftime entertainment, also known as the Pepsi Zero Sugar Super Bowl Halftime Show. The title is probably longer than the outfit Gaga will choose.

The Patriots’ favorite stadium food is a steak sandwich, served on a ciabatta roll with all the fixings.But they also have vegetarian options, such as a mushroom burger with Bousin cheese — which is very similar to the herbed cheese recipe below.

They also sell a meat-free hot dog. Another specialty is the buffalo chicken cheesesteak that is served on a roll with blue cheese. Or you can get fish and chips. Another alternative is a turkey burger, which contains brown rice, spinach, celery and dried cherries.

The Atlanta Falcons have a relatively new stadium, the Mercedes-Benz Stadium. Regardless of the caché of the name, the Falcons made a commitment to affordable food, with 15 restaurants on site.

Make it easy on yourself. Order wings. Then make these easy appetizers to go with. These are all make ahead recipes, as each one needs to chill for flavors to develop. So you can enjoy the party, too.

In a food processor, blend cheese, mayonnaise, onion and jalapeño relish until combined. Mixture will be a little crumbly looking, but don’t be tempted to add more mayo.

Chill for flavors to combine, at least one hour or overnight. When ready to serve, use a spoon to fill the center of the celery stick. Garnish with sliced olives and sprinkle with chili powder, if desired.

The jalapeño relish I used packed quite a punch, so we opted not to sprinkle with chili. The cool celery was a welcome contrast to the spicy cheese.

Combine cream cheese, chives, basil, thyme, dill, lemon juice and pepper to taste. If desired, reserve pepper to use on outside of cheese. Chill several hours or overnight for flavors to blend. Spread on pita chips or other crackers.

Thaw spinach and drain well, squeezing out excess water. Combine with remaining ingredients, except cabbage, and chill, allowing flavors to blend. Meanwhile, cut the bottom (core) end of the head of cabbage to make it flat. Slice about an inch off the top of the cabbage. Using a paring knife, carefully cut the center of the cabbage out to form a bowl for the dip. This takes some muscle and careful cutting.

Alternatively, line a bowl with the outer leaves of the cabbage and place spinach dip in center. Serve with cut vegetables, tortilla chips or more cabbage leaves.

By Jennifer Hubbard for the Salisbury Post SALISBURY — It seems serendipitous that both the Salisbury Symphony Orchestra and St.... read more