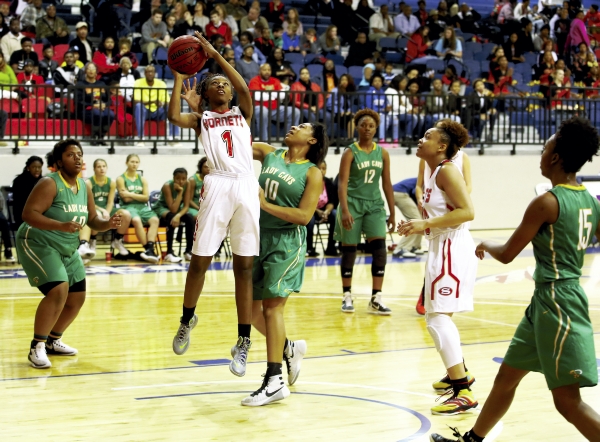 SALISBURY—  It was a strange girls basketball game.

Salisbury beat North Rowan with relative ease, 59-41, on Saturday at Catawba’s Goodman Gym, but North probably had more to feel good about than the Hornets did when the Central Carolina Conference game was over.

Part of Salisbury’s frowns were due to the aggravation of a quad injury that knocked Tyzarea Alexander out of the game in the third quarter. She’s critical to the Hornets, and she may need to rest the injury for a while.

Salisbury’s 18-3 edge in the first quarter was too much for the Cavaliers  (2-15, 1-5 CCC) to overcome, but they played on basically even terms after that with the state’s third-ranked 2A squad.

Freshman Anayia Fulson and Alexander, a senior, combined for 14 of the Hornets’ points in the first quarter.

“We were doing good for a while,” Fulson said. “We needed to keep playing like we started, but we let them out-rebound us.”

Salisbury (14-1, 5-0 CCC) led by 28-4 in the second quarter after Mystjkal Phifer scored on a drive, and it appeared that North might get embarrassed, but the Cavaliers got  3-pointers from Navi Joyner and Bea Connor and cut their deficit to 31-12 by halftime.

“We’ve been working on shooting 3s a lot,” North coach Ron Bost said. “Because everyone’s packing it in on us.”

North cut into the SHS lead a bit more  early in the third quarter, but a steal and a couple of free throws by Salisbury sophomore Bryanna Troutman pushed the lead back to 43-23, and the Hornets had a nice surge at the end of the period that included layups by Maria Capito and Mariah Glenn. North was down 28 by the end of the period.

“We were just missing a lot of layups,” Bost said. “I guess it’s just too much adrenaline, girls putting pressure on themselves to do well.”

Salisbury reserves finished things off, and North built some confidence, outscoring the  Hornets 18-8 over the final eight minutes.

“We seem to start strong or end strong, one or the other,” Bost said. “Today we finished strong, I do know I’m feeling a lot better about the way we’re playing.”

Connor led the Cavaliers with 13 points. Brianna White, who had 20 in Friday’s win against Lexington, scored 12.

Salisbury got 15 points from Fulson, 13 from Troutman, 10 from Alexander, who made six free throws, and seven from Capito. Fulson made three 3-pointers, while Capito and Troutman had one each.

“When we start fast, we’ve got to stay mentally tough and keep it going,” Brice said. “We can’t let up. The girls have to understand that when you’re 14-1 you’re going to get everyone’s best shot. We’ve got to buckle down and be ready for it.”

Staff report WINSTON-SALEM — Livingstone took the momentum of tying the game with 13 seconds left in regulation with it... read more