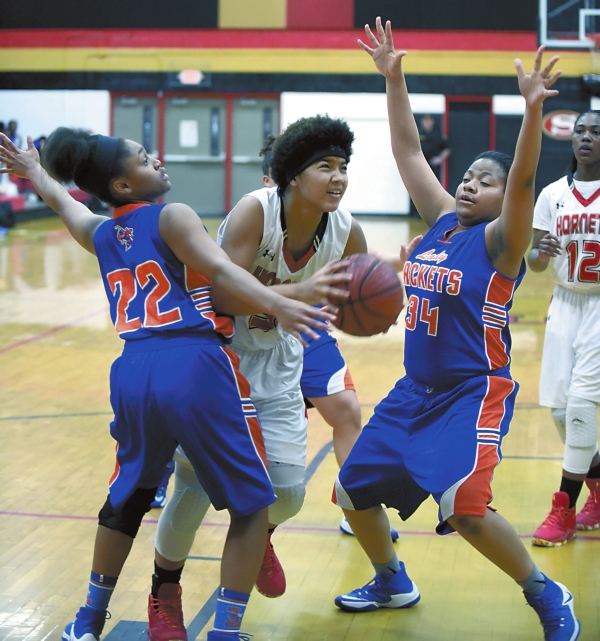 Wayne Hinshaw/for the Salisbury Post ... Salisbury’s Bryanna Troutman, shown going to the basket against Lexington on Wednesday, had 18 points and 19 rebounds in last night’s big win over East Davidson.

SALISBURY — The girls’ basketball game between the Central Carolina Conference’s two best teams lived up to the expectations — well, sort of.

Salisbury and East Davidson combined for a lot of missed shots and 27 turnovers, but the contest was nip-and-tuck and saw seven lead changes at the Hornets’ gym on Friday night.

In the end, the Hornets made enough plays to win, 57-51, their 13th straight victory after a season-opening loss. Salisbury takes over first place in the CCC at 4-0 while the Golden Eagles fall to 13-5 and 4-1.

After falling behind by a point to East Davidson with four minutes remaining, Salisbury’s girls finished the game on a big 14-7 run. And after the team missed eight of their first 13 free throws, the Hornets’ Bryanna Troutman and Tyzarea Alexander made 3-of-4 in the final 32 seconds.

But there was plenty of drama before that.

Salisbury led at halftime, 27-25, and throughout the second half until East’s Brooke Anders drilled a 3-pointer for a 44-43 lead, with 4:01 left in the contest.

One could almost sense a collective resolve in Salisbury’s play immediately, as junior guard Maria Capito sank a long 3-pointer to regain the lead at 46-44.

Troutman, the 6-0 sophomore forward, then blocked a shot, got the rebound and when left alone outside, dropped in a 3-pointer for a five-point lead at the 3:06-mark.

Troutman’s 3-pointer, her only outside shot of the night, seemed to buckle the knees of the visitors, who were more focused on stopping her inside game.

“That was big shot, one that she has in her game,” said Salisbury coach Lakai Brice. “She just hasn’t shot as many threes as last year but it’s definitely in her skills to shoot from out there.”

East’s Skylar Grubb came back with a 3-pointer of her own, but freshman guard Anayia Fulson drained a 3-pointer for a 52-47 lead with 2:20 remaining.

After a Salisbury turnover, its only one in the fourth quarter, Troutman fouled the Eagles’ Megan Hamilton at the 2:08-mark. However, Hamilton missed both free throws and nine seconds later, Capito connected on a jumper just inside the arc for a 54-47 advantage.

Anders scored on an uncontested layup but the Eagles then had to foul several times to get Salisbury into the bonus. When that was finally accomplished, Troutman calmly sank two free throws with 32 seconds left — pretty much wrapping up the victory.

Salisbury’s “big four,” as Brice calls them — Troutman, Alexander, Capito and Fulson — scored all of the team’s points. Troutman had 18 points and a whopping 19 rebounds, while Capito and Alexander followed with 14 points. Fulson, who spent time on the bench in foul trouble, scored 11 points, but had the big 3-pointer late in the game.

“It was big win,” said Alexander, one of two Salisbury seniors. “We came out playing very slow, but we got more focused as the game went on. I think we were a little nervous early, because it was a big game for us.”

Brice said that the Golden Eagles had a lot to do with the slow start.

“East Davidson did a good job of stopping our transition game and we really didn’t play our style of basketball during the first three quarters,” said Brice. “We got our transition game going in the fourth quarter and that opened up some outside shots and the girls knocked down some big-time 3s. And it led to some fast-break buckets as well.”

Salisbury won despite going 8-for-17 at the foul line, including 10 misses in the first half.

“We do practice free-throw shooting,” Brice added with a sigh. “I’ve told the team, you don’t want to lose a game at the foul line. It’s free points and especially on your home court, you’ve got to concentrate and take advantage of those opportunities.”

The Golden Eagles also had issues at the foul line, making just 7-of-15.

“We needed a game like this … a tough game, so that when we get back to practice, we’ll have plenty to work on and improve on,” concluded Brice.