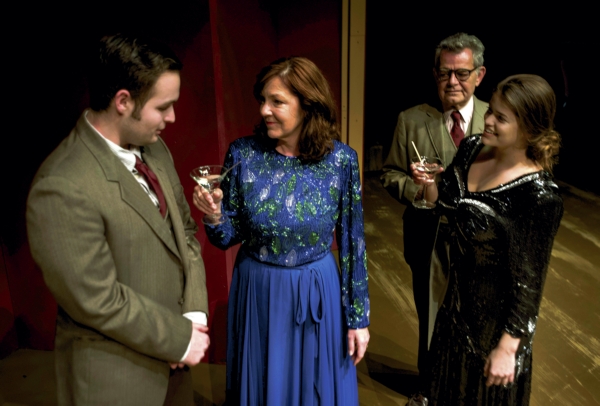 ‘Act One’ about a playwright who lit up Broadway

The story of 'Act One'

For background on “Act One”: http://www.salisburypost.com/2017/01/19/piedmont-players-theatres-new-play/

The first thing you must do if you go to see Piedmont Players’ “Act One” is read the playbill. There, you will find “Who Was Moss Hart?” which describes the playwright that this play is about.

Hart was a successful Broadway writer who collaborated with theater legend George S. Kauffman, a successful playwright, actor and director. The two were responsible for big hits in the 1930s including “You Can’t Take It With You.”

Hart grew up the son of English immigrants who lived in the Bronx in New York City. His father was an unreliable breadwinner; his mother took in laundry and sewing. They also took in boarders.

The first act of this production is all exposition as Hart tells his life story as the scenes play out on stage. It details his attempts to find a decent job and to get into the one thing that matters most to him — the theater. His Aunt Kate, who lives with the family, is a theater lover who takes him to afternoon performances, even when he is in school, and nurtures his love of writing.

Nothing is easy for Hart or his family, and he runs into obstacle after obstacle.

Austin Young plays an understated Moss Hart, telling his story in a low-key style and bemused by it all. Young’s Hart comes to life in the second act when he interacts with Kaufman to rewrite his play. There’s conflict and suspense about whether Hart will ever see his play on Broadway.

Gary Thornburg’s Kaufman is intriguing. The playwright hated sentiment, he was germ-phobic, and his working habits were relentless. Thornburg makes the character come to life so the audience can see how difficult Kaufman was to work with but also how tenacious he was and how he came to root for the young Hart.

The rest of the cast plays multiple roles, so it may be hard for some people to follow the story when, say, Marc Anderson appears as four different people. Anderson does a good job differentiating the parts, but the audience has to follow closely. Frequent costume changes help.

Joe Cornacchione plays four parts, too, and Jon Leach plays five, going from a character in a play to a Broadway producer from Vienna who has strange habits.

Lori Van Wallandael, a Piedmont regular, is Hart’s mother, as well as writer Edna Ferber. She manages to make the two as different as they really were.

The funniest sight you will see all night is Nick Bishop in a hilariously cartoonish usher’s uniform. His  three parts are well defined.

Robert Hackett takes on the roles of Hart’s ne’er-do-well father and successful producer Max Siegel, among others. He and Young have a nice moment at the end of the play that warms the heart.

Hart’s “office boy brigade,” played by Joe Cornacchione, Tony Moore and Tanner Groppi, are a fun bunch who interact well together and show some of the sass needed to make your way in the big city.

Gavin McDaniel gets to play both a young Moss Hart and Hart’s younger brother, Bernie, a child with dreams of his own.

Others in the cast include Lesi Jonap, who is Kaufman’s supportive and smart wife, a hostess of parties where all the celebrities of the day, including Morgan Warren as Dorothy Parker, show up to gossip.

The second act is better than the first, with the interplay between Young and Thornburg and the building tension of the play within the play — will it make it to Broadway?

The play ends after 10 p.m., but that includes a 20-minute intermission. Director Reid Leonard designed a clever three-box set that serves as all the locations in the play.

“Act One” is based on Hart’s early autobiography and was adapted for the stage by James Lapine.

Jeff Steen testifies about his discovery of his murdered grandfather

By Shavonne Walker shavonne.walker@salisburypost.com SALISBURY — “There was so much blood there,” Jeff Steen said as he testified Thursday and... read more