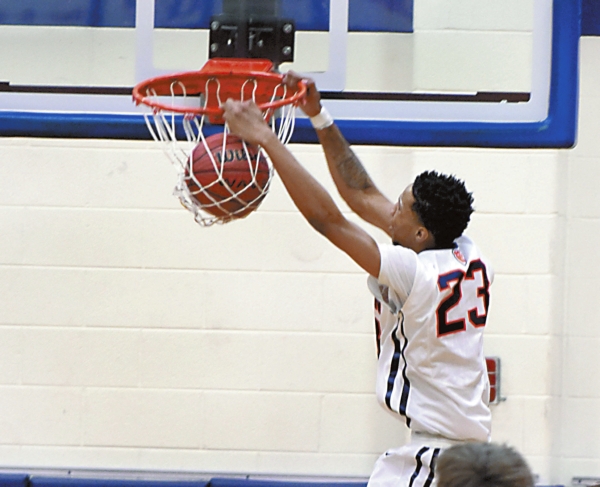 Carson breezes past South with 3-balls and dunks

CHINA GROVE — Brian Perry would be lying if he said he wasn’t concerned about winless South Rowan before Friday’s South Piedmont Conference matchup.

“South is struggling a little bit, but you could see they were in the right spots and running the right sets,” Perry said. “And for our team to see the score of their game against West (57-55, on Wednesday) was a little unsettling.  That kind of tuned us in a little bit more for this game. There was no overlooking South.”

That was apparent from the start. Fifth-place Carson (12-6, 9-4)  made 14 3-pointers, including nine in the first half, and remained a factor in the congested league standings. “We’ve got three tough conference games next week,” Perry indicated. “That’s what made winning tonight so important.”

The Cougars achieved instant liftoff against South (0-19, 0-13), racing to a 23-8 first-quarter lead and stretching it to 25 points by halftime.

“We got after them with the press, started hitting shots and got up to speed pretty quick,” said Carson junior Jamarius Hairston. “When we’re shooting it like that, we usually get good results.”

Hairston — a 6-foot-4 forward — played like a ’68 Chevelle, turbo-charged and sporty. He scored 20 of his game-high 24 points in the first half and went 4-for-5 on attempted dunks.

“I started working on them in middle school,” he said with a sideways smile. “Just these little flushes in practice every now and then. Now that it’s varsity, I’m comfortable trying them in games.”

“They’re a shooting team. We already knew that,” he said. “But we allowed them to take their shots. That’s what it boils down to.”

South trailed by only 7-6 after three minutes, but that was before White knocked down three long balls to crack the game open.

“We did not defend. We did not take care of the ball,” McCain spewed. “We didn’t play anywhere near as well as we did the other night against West — mentally, physically, all of the above.”

Perhaps the key for Carson was its ability to penetrate the lane, then feed the ball to outside shooters positioned for open shots.

“We shared the ball and spaced ourselves out,” Perry said. “And hit some shots. Once we got that going and had some energy and got that lead, there was no looking back. Sometimes it’s easy to play like that.”