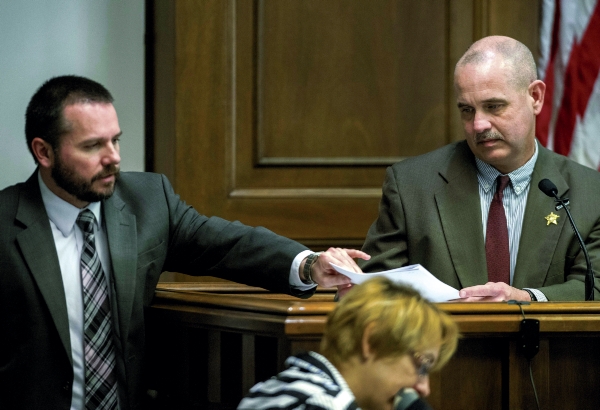 SALISBURY — The question defense attorney Darrin Jordan hoped to answer with his first witness Wednesday was whether Sandra Steen gave contradictory statements to Rowan County authorities because of a memory disorder brought on by the head injuries she sustained Nov. 5, 2013.

Secondarily, Jordan argued that the questions investigators asked Steen could have triggered inaccurate memories, thus leading her to say her son, Jeff Steen, attacked her and killed her father, J.D. Furr.

Corvin said the way she was questioned by investigators would make her susceptible to new memories or forced memories.

“The mind will soak up things in the environment to use those as fact,” Corvin said.

Corvin said it’s not that people with confabulation are trying to be untruthful or to mislead; they are just unaware that their memories are inaccurate or out of sequence.

Rowan detectives interviewed Sandra Steen twice on Nov. 6, 2013, once the following day and again on Nov. 21, 2013, the day her son was arrested.

Sandra Steen told investigators that she at first thought it was her son who came up behind her and was playing with her, but that quickly changed when her attacker tightened his arm around her neck. She has said her attacker was shorter than her son and more muscular. She also said at one point that she believed the person who assaulted her was wearing a ski mask and that there might have been a second person.

During her final interview with investigators, she came to the conclusion that the attacker was Jeff Steen.

Corvin was given all of Sandra Steen’s medical records, including those from Stanly Regional Medical Center, Carolinas Medical Center in Charlotte and CMC’s rehabilitation facility, as well as copies of her audio and video interviews with police.

Before Corvin’s testimony, Jordan asked that the charges be dismissed on the grounds the state provided insufficient evidence to connect his client to the murder and assault.

Jordan said the perpetrator had not been identified. He also said that one of the grounds for first-degree murder is premeditation, and that had not been proven. Judge Nathaniel Poovey denied the motion to dismiss, and the trial continued.

Assistant District Attorney Tim Gould argued that the doctor does not have the underlying education to be able to testify about the specific topic of his testimony. Poovey said Corvin is qualified and would be allowed to explain what he believed occurred with Sandra Steen’s memory.

The prosecutors told Poovey it would be unfair to allow Corvin to testify because Jordan did not give them sufficient notice.

Jordan said he had informed District Attorney Brandy Cook and Gould he was thinking about calling Corvin as a witness. Jordan and Poovey noted that the prosecutors had given Jordan notice of their intent to introduce the issue of fingernail scrapings at the trial in October.

Jordan said he asked for a continuance then and was denied. The trial was continued from its intended October date, but mostly because of scheduling conflicts and evidence that still needed to be tested.

In the end, Corvin was allowed to testify only to what he knew to be true of amnesia and traumatic brain injury as it pertained to confabulation.

Jeff Steen’s son, Jordan Steen, now 21, also testified Wednesday. He said he didn’t remember many details, answering many of the questions asked by his father’s attorney with, “I don’t remember.”
Jordan Steen, who was 16 at the time of the murder, said he did recall going to his great-grandfather’s house to install a ceiling fan, but he couldn’t recall the specific date. He said he went to the farm to help put up a ceiling fan, but he and his father realized the blades were too long and would likely hit the bathroom door.

Jordan and his father went back to their Albemarle home where Jeff Steen cut the ceiling fan blades with a band saw to shorten them. They returned to the River Road farm but had to leave again when Jeff Steen discovered he had the wrong screws.

Jordan Steen did not return to the farm with his father a third time. He stayed home to do homework and cook supper, he told the court. He saw his father briefly when he returned home later in the evening, but he said Jeff Steen rushed out the door to go to work.

Jordan said after his father told him his great-grandfather was murdered, he went to his room and did his homework, like he’d always done.

He said his father was upset and, “looked like he’d been crying for a couple of hours.”

Jordan Steen said he had a good relationship with his father and grandfather.