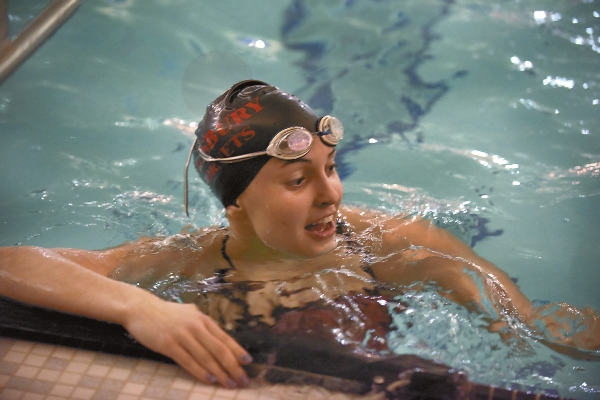 SALISBURY — The crowd was swollen at the Hurley YMCA  for the Rowan County Swim Championships, and Callie Alexander was nervous before taking on two strong South Rowan swimmers in the 100 breaststroke event.

“I was telling Callie to calm down, but she was worried about all those people watching her,” said Salisbury junior Kathryn Morrison. “But it turned out that she didn’t have anything to worry about.”

“I was proud of all my teammates today, but I was especially proud of Callie,” Morrison said. “I had confidence in us, like I always do, but it’s hard for a team our size to win a county championship. I didn’t know it if  it was a realistic goal or not.”

Salisbury coach Sallie Pittman, fresh off Tuesday’s win in the Central Carolina Conference Championships, had crunched the numbers. She believed it would be close. Salisbury has several of the county’s elite swimmers, including two-time county swimmer of the year Morrison, but other teams have more depth and points were being awarded for 12 places.

“I knew we had the skill,” Pittman said. “I didn’t know if we’d have the numbers.”

It helped the Hornets that the first-place points that they didn’t get, got spread out. Carson had a couple of individual victories and took a relay, while South and East notched one win apiece.

Besides winning the 100 backstroke and 100 butterfly, Morrison teamed with Alexander, Mary Kaufmann and Sharmi Amin for winning swims in the 200 medley and 200  freestyle relays. Morrison was 4-for-4 and was named the meet’s outstanding female swimmer.

“We switched the relays up today, and that meant the 100 backstroke came right  after I competed in the 200 free relay,” Morrison said. “So I was proudest of the time I swam in 100 back. I was kind of tired.”

Morrison swam the distance in 59.50, winning the event by almost 17 seconds. She’s special. She was second in the 100 butterfly as well as the 100 backstroke in last winter’s 1A/2A State Championships as a sophomore.

Armin won the 100 freestyle and was second in the 50 free. Besides winning the 100 breaststroke, Alexander added a third place in the 200 IM. Kaufmann pleasantly surprised Pittman with a third in the 100 backstroke, and the cross country runner had the stamina to place second in the 500 free.

“It was no sure thing, but we expected it to be a dogfight between Salisbury and us,” East Rowan coach Jon Heidrick said. “We actually exceeded our expected performances in most of the events, but it wasn’t enough.”

Holliday Harvey  had  a win for South Rowan, edging Amin in the 50 free. Harvey also finished second to Alexander in the 100 breaststroke.

Madilyn Jones also turned in a stout day for the Raiders, with a second in the 100 free and a third in the 100 breaststroke.

South placed second behind the Hornets in the 200 medley relay that kicked off the competition.

Carson got wins from Taylor Sever in the 200 IM, Olivia Shorter in the 500 free, and the 400 free relay team of Sever, Emma Ellams, Payton Leroy and Alyssa Douglas. Douglas added a second in the 200 freestyle. Shorter was second in the 100 butterfly.

But it was Salisbury’s day.

“We kept it legal — only one DQ,” Pittman said. “Just a great team effort. As small as our numbers are, we preached that everyone had to do well, and all of them did.”