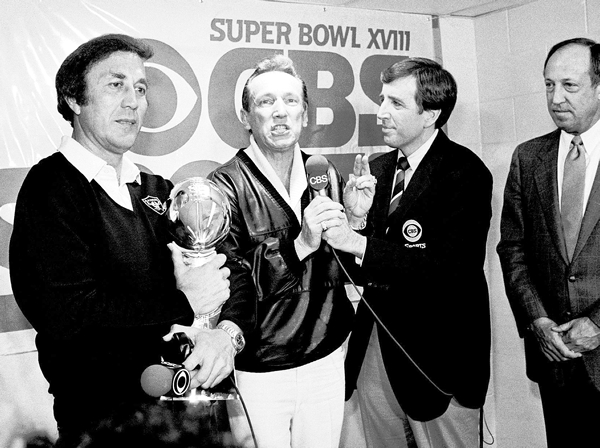 FILE - In this Jan. 23, 1984, file photo, Oakland Raiders coach Tom Flores clutches the Super Bowl trophy as Raiders managing general partner Al Davis is interviewed by Brent Musburger in the locker room after their 38-9 win over the Washington Redskins in Super Bowl XVIII in Tampa, Fla. At right is NFL Commissioner Pete Rozelle. Musburger is calling an end to his broadcast career. Millions of Americans experienced sporting events through his folksy narration, most often when he was the lead voice of CBS Sports during the 1980s. Musburger will call his last game for ESPN on Jan. 31, a college basketball contest pitting Kentucky against Georgia. (AP Photo/File)

NEW YORK (AP) — Brent Musburger is calling it a career at ESPN after being the play-by-play man in the booth at sporting events enjoyed by millions of Americans, most prominently when he was the lead voice for CBS Sports in the 1980s.

Musburger, 77, said he’s leaving active sportscasting to help his family get a sports handicapping business started and to use some of the millions of airline miles he’s earned for some fun travel.

His last game will be the Kentucky-Georgia men’s basketball game on Jan. 31. That takes him back to Rupp Arena, where he called Villanova’s historic NCAA championship upset over Georgetown in 1985.

Both Musburger and ESPN say comments about Oklahoma football player Joe Mixon that were criticized as insensitive during the Sugar Bowl earlier this month had nothing to do with his exit. Musburger said he hoped Mixon, who had been suspended for a year after punching a woman and breaking her jaw, would make the most of his second chance and did not initially talk about his victim.

A former sportswriter, Musburger’s broadcast fame took off through his work on “NFL Today,” the pro football pregame show. He broadcast the NBA, college basketball, the Masters and tennis — most of CBS’ marquee events.

He was behind the mic for one of college football’s most memorable plays, Doug Flutie’s “Hail Mary” pass that beat Miami for Boston College in 1984. He confessed to Flutie later that it took him awhile to identify Gerard Phelan, Flutie’s roommate, as the receiver for that pass — and Flutie told him he didn’t know, either, until he had run off the field.

Musburger was abruptly dropped by CBS in 1990 in what was perceived as a salary dump, then came to work for ABC and ESPN.

“Brent made every event feel larger,” said Stephanie Druley, ESPN senior vice president for events and studio production. “To me, there is probably not a greater storyteller as a play-by-play person. He can spin a yarn like nobody else and it made games definitely more enjoyable to watch.”

Musburger’s opportunities for national exposure grew more limited in recent years when ESPN assigned him to its SEC network for college football. But he still called college basketball regularly and even though ESPN has been trying to save money lately by cutting higher-cost talent, Druley said the network had no interest in seeing him leave.

Sportscasting today “has become more and more numbers-driven, advanced statistics and everything,” Musburger said. “That’s fine. I was never going to change because I’m a people guy. I like pulling up a chair in a saloon with a cold beer and telling stories.”

Musburger took heat for backward thinking in 2013 when he extolled the attractiveness of an Alabama quarterback’s girlfriend, a controversy he finds silly. “I called a beauty queen beautiful,” he said. “Are you kidding me?”

He said he hoped people felt comfortable listening to him.

“Not everyone approved of everything I said,” he said. “I understand that. I come from a sports writing background and I’m not afraid to take a position on certain things from time to time. But for the most part, I thought people should be coming to a game to escape for three hours and forget about what their individual problems are.”

He said he’s not ready to fully retire (“I don’t do shuffleboard well),” he said), but his decision lets ESPN escape from an uncomfortable decision. Having a broadcaster of college games publicly identified with a sports handicapping business wouldn’t fly. That accounts for the odd timing of his departure in the middle of the college basketball season; his family wants the site fully operational by the NCAA men’s basketball tournament.

If anything, the move will force Musburger to change a pat answer when he’s approached by fans.

“They always ask me my favorite game and I always say, ‘The next one,’” he said.

After next Tuesday, that will no longer be applicable.

Jim Kelly draws on experience in campaign against cancer