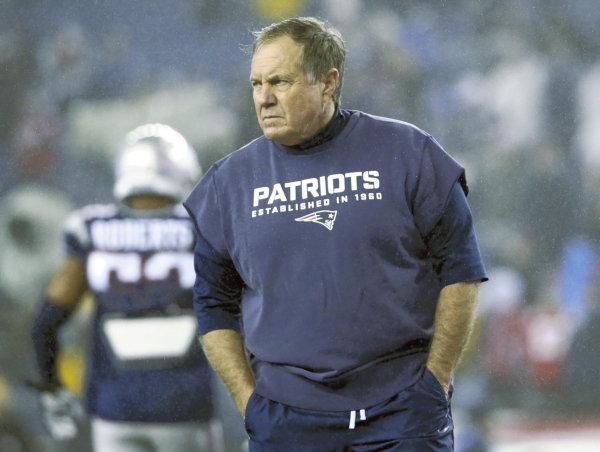 FILE - In this Jan. 22, 2017, file photo, New England Patriots head coach Bill Belichick walks around during warm-up's before the AFC championship NFL football game against the Pittsburgh Steelers, in Foxborough, Mass. The Patriots will battle the Atlanta Falcons in the Super Bowl on Feb. 5 in Houston. (AP Photo/Elise Amendola, File)

Rest for Patriots as they begin Super Bowl prep for Falcons

FOXBOROUGH, Mass. (AP) — Bill Belichick is on to the Atlanta Falcons.

After taking a day to review and recharge following his team’s AFC championship game win over Pittsburgh, the New England coach said Tuesday that the coaching staff’s preparations are fully underway for the Super Bowl.

The Patriots are preparing to make their seventh Super Bowl berth during the Belichick era, making them veterans at this point in handling the various logistics involved with the big game. Belichick said it’s helped them turn the page “about as quickly as we could.”

“We’re on to Atlanta now as a coaching staff. We’re deep in the middle of them,” he said.

New England has fond memories of the Super Bowl played in Houston, having won in 2004 on Adam Vinatieri’s field goal in the closing seconds to beat the Carolina Panthers.

“There was a big matchup against our kind of ‘no-name’ offensive line and a very good defensive front that the Panthers had,” Belichick recalled.

But Belichick says that’s the furthest thing from his mind as his team prepares for a Falcons team it hasn’t seen much on film this season with just five common opponents (San Francisco, Los Angeles, Seattle, Arizona and Denver).

The Patriots do have some familiarity with Falcons coach Dan Quinn, who was defensive coordinator of the Seattle Seahawks when the teams met in the Super Bowl two years ago.

“They have some of their own characteristics and of course the players are different, so that makes it different,” Belichick said. “But schematically there is quite a bit of carryover.”

One of the key differences, he said, is that the Falcons seem to bring a little more pressure than Seattle ran.

Belichick also sees similarities in the schemes, which rely on players of similar skillsets such as Seattle’s Kam Chancellor and Atlanta’s Keanu Neal.

This will also be the second straight game that the Patriots defense will have to contend with a dynamic receiver.

Julio Jones had nine receptions for 180 yards and two scores in Atlanta’s NFC championship game win over Green Bay, but will be challenged by a New England secondary that has given up just two passing touchdowns in the playoffs.

The team will have meetings Wednesday and then return to the practice field on Thursday.

Patricia is in his fifth season leading the Patriots’ defense, but has been a New England assistant since 2004.

While he’s witnessed the interactions of several different teams in that time, he said this group has a vibe in the locker room that is unique.

It is a dynamic that he’s looking forward to seeing grow over these next two weeks.

“If you play at this point in the season, you play this late in the season and you’re blessed enough to do that, I think the guys just have that kind of special bond,” he said.

“They have a good time with each other but they also know when we’re in the meetings, we’re grinding, we’re working, we’re studying.

“When those guys communicate like that and they have that kind of open dialect back and forth, I think it just kind of enhances everything that goes on, hopefully, when you get out to the practice field and to the field itself.”