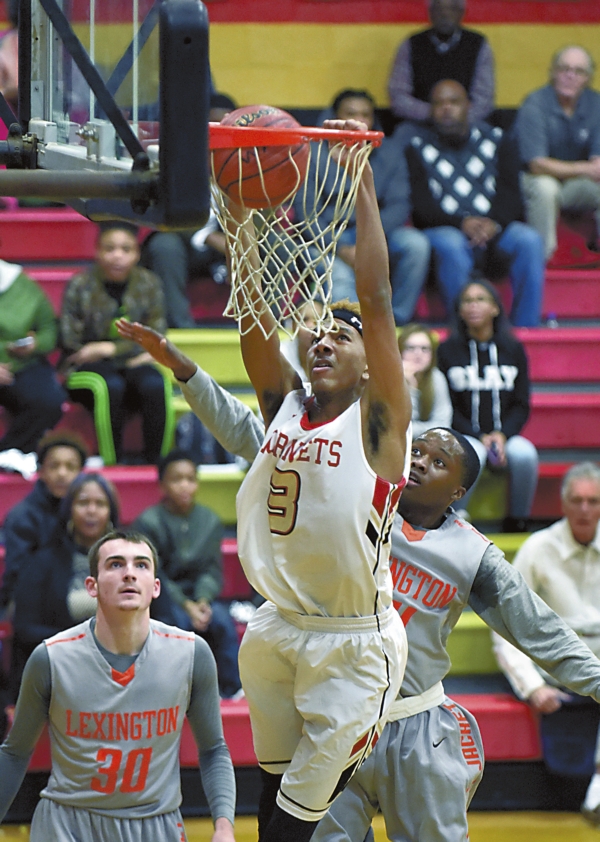 SALISBURY — Salisbury’s Zadrian Harris got muscled around in the paint early and missed several point-blank chances, the sort of misses that give coaches gray hairs and bald spots.

When Harris failed to finish again early in the second quarter — he got fouled, but no whistle — three Salisbury coaches screamed at him in unison, “Go stronger!”

“I really couldn’t hear them yelling at me, with the crowd,” Harris said with a smile. “I was surprised I didn’t get a call, but I also knew we had the ball out of bounds, and my teammates were going to come right back to me.”

The Hornets did go right back to Harris, and this time he went up very strong. The 6-foot-5 senior dunked with authority, the crowd roared, and the Hornets ignited. Then a few seconds after his dunk, Harris powered in a three-point play, and the Hornets were on their way to a blowout of Central Carolina Conference rival Lexington. The final: Hornets 87, Yellow Jackets 59.

The game was decided in the second quarter when the Hornets mashed the visitors, 26-13, for a 45-23 halftime advantage. Harris had 10 of his 13 points in that blistering eight-minute interval.

“We went into this thinking it was going to be a hard game,” Harris said. “But this is our gym, and we hadn’t been in here in a long time. We wanted to play hard and play well.”

How long had it been since the Hornets had played a home game?

While the stat sheet said the Hornets played solid basketball— they won the glass, forced 22 turnovers and shot 52.5 percent, while holding the visitors to 33.9 percent — head coach Bryan Withers was pleased, but not thrilled.

“We’ve just had so many breaks in the schedule,” Withers said with a sigh. “We’re still really rusty, but we were better tonight than we were last week. Maybe we’re starting to get back in the flow.”

Salisbury went through some stuff last week,  full-game suspensions and suspensions for a half, adversity that can  happen during a long season. But Withers hopes everyone is on the same page now.

“I think  everyone understands the message — that we’re going to do things the right way,” Withers said.

Point guard Trell Baker had a stout game for the Hornets, constantly attacking and scoring 18 points as well as setting up teammates. He only fired one 3-pointer — and made it.

“He’s becoming a complete guard,” Withers said. “We don’t need him to be another shooting guard. We need him to be our point guard, and he did that very well tonight.”

Tre Oats got the Hornets started with his shot-blocking and inside scoring. Will Leckonby knocked down a trio of 3-pointers. Oshaun Robinson and Bill Fisher combined for 15 points off the bench, and Fisher, a 6-5 sophomore, altered a lot of Lexington shots in his 12 minutes on the floor.

The Hornets (9-4, 2-1 CCC) have a lot of things going for them, including waves of depth, but the X factor is Harris. If he plays forcefully, as he did on Wednesday, they have the potential to be an exceptional 2A team.

“When he attacks the rim, he’s good,” Withers said.

After that strong second quarter, Salisbury also put together an overwhelming third quarter. The Hornets scored 29 points in the period, including nine  by Baker, to stretch their lead to 74-45. The Hornets led by as many as 31.

Salisbury didn’t shoot free throws particularly well (17-for-31, for 58 percent), but that was about the only flaw.

Adrian Craven attacked and made frequent trips to the foul line for Lexington (9-9. 2-3 CCC) and scored 17 points. Cameron People made three 3-pointers, including an accidental bank, and scored 10. Limited by an injury, Lexington standout Marquise Jordan scored only six points.

“He’s hurt, and we were able to throw a lot  of bodies at him,” Withers said.

It was a lopsided win for Salisbury, which had lost eight out of 10 to Lexington, before breaking through for a sweep of  the Yellow Jackets last season, Withers’ first as head coach. Now the Hornets own three straight victories in a series that usually always hard-fought and high-flying.

“We played together and we played good defense,” Harris said. “This is how we’re capable of playing all the time.”