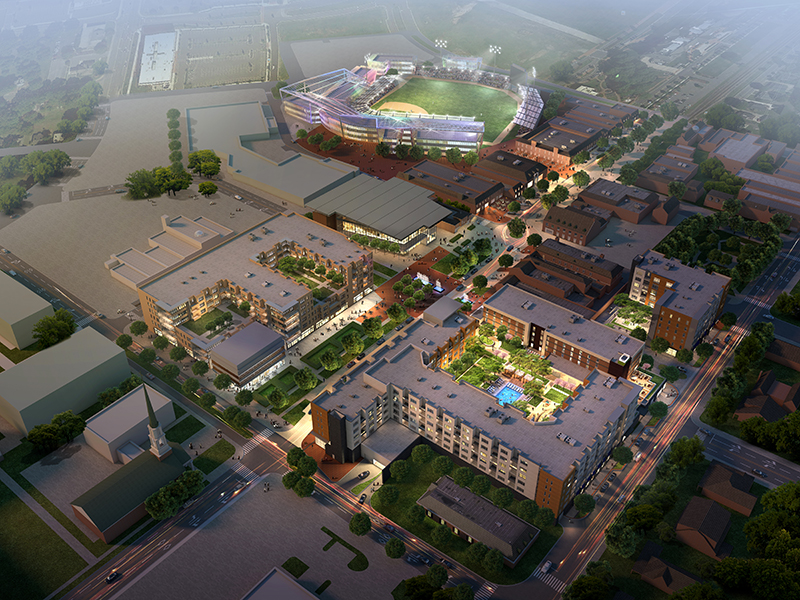 Submitted photo - This rendering shows what a redeveloped downtown Kannapolis might look like. It includes a minor league baseball stadium and, in the bottom right, the downtown demonstration project.

KANNAPOLIS — The City Council on Monday approved plans for a $72 million project that will include a downtown parking deck, retail space, nearly 300 apartments and, potentially, a hotel.

It’s the most significant and expensive part of the town’s downtown redevelopment to date, said Kannapolis Mayor Darrell Hinnant.

The development will include 270 apartments, nearly 20,000 square feet of new retail space and a 400-space parking deck. The retail space estimate doesn’t include the old Cabarrus Bank Building, which won’t be demolished as part of the development. A hotel is proposed as part of a second phase of the project.

City officials refer to the development as the “demonstration project.” It’s intended to show others what’s possible in a redeveloped downtown.

Florida-based Lansing Melbourne Group or a subsidiary will oversee development of the project. The city will essentially be responsible for providing $12 million to fund construction of the parking deck, said City Manager Mike Legg after Monday’s council meeting. Later this year, the city will seek state approval to issue limited-obligation bonds for the parking deck, Legg said. The remaining $60 million will come from private investors and developers, he said.

In the midst of the discussion, Councilman Ryan Dayvault asked council members to stop and think about the significance of the agreement they were about to approve.

“Think about how exciting this actually is to be at this point and to have this document together and, for me, it’s been overlooked so many times about what this truly means in the grand scheme of what we’re doing here,” Dayvault said.

Private investment in the demonstration project would be six times what the city spent in 2015 to buy 46 acres of its downtown, Dayvault said. City leaders’ goal is to reinvent a city that was created as a result of Cannon Mills. When Pillowtex, the successor to Cannon Mills, closed in 2003, it left thousands of people unemployed. The N.C. Research Campus has redefined the area where the textile mill stood, but much of downtown Kannapolis remains vacant.

Legg said construction on the demonstration project could start as early as this summer. Construction will take 12 to 18 months, he said.

The parking deck will have space for apartment residents and the general public, Flotz said.

Plans and some renderings show a hotel on site. However, developers would have discretion about whether to build the hotel. Additional apartment units may be built instead of a hotel.

Before unanimously approving the 30-page agreement that sets guidelines for the  project, the City Council held a public hearing. Roger Johnson, a Kannapolis native who is the manager of economic development for Greenville, was the only person to speak. Johnson commended council members for their vision to transform Kannapolis.

“You guys have taken concerted action to make this town better,” he said.

After the public hearing, council members asked questions to clarify details of the demonstration project agreement before voting on two items. One was the legal agreement. The second was a resolution to establish a central business district. Both received unanimous approval.

The central business district starts near Dale Earnhardt Boulevard’s intersection with South Main Street, includes downtown property purchased by the city and the N.C. Research Campus, and stretches slightly past Loop Road to include land in Rowan County.